Wheeler and bullpen kept it close 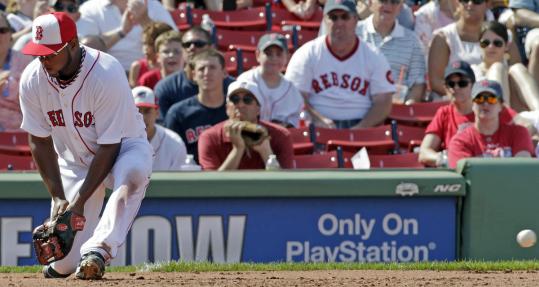 Dan Wheeler knew he had nothing to do with the Blue Jays’ first seven runs yesterday. But he knew he could do something to prevent any more.

Wheeler entered the game with one out in the third inning. Red Sox starter John Lackey already had given up five hits in the inning, and the Blue Jays had a 7-0 lead. Travis Snider was on second base, and Toronto wanted that eighth run.

Wheeler jogged to the mound with two thoughts. “Try to minimize the damage. Go out there and throw strikes,’’ he said. “[I wanted to] get as many outs as I could.’’

He got Jose Molina and John McDonald to fly out to end the inning. Then he had a 1-2-3 inning. Then another. He retired eight straight batters in those 2 2/3 innings, his longest outing since 2006.

“He threw the ball very well,’’ manager Terry Francona said after the Sox ended up falling, 9-7, at Fenway Park. “He threw all strikes. We actually had a chance.’’

Perhaps the Sox should start expecting that type of performance from Wheeler. He has a 1.62 ERA in 15 appearances since coming off the disabled list May 20.

“I’m just throwing quality strikes,’’ Wheeler said. “That’s what it boils down to - making good pitcher’s pitches. When I do that, I think we all have success.’’

Alfredo Aceves came in to start the sixth and allowed two runs (one earned) over the next 2 2/3 innings. He’s become one of the Red Sox’ most reliable middle relievers - and one of their more flexible.

Aceves and Wheeler said it was important to help pick up the struggling Lackey. All pitchers have had the kind of outing Lackey had yesterday.

It certainly wasn’t a bad day for the bullpen, despite the loss. Wheeler and Aceves kept the Blue Jays’ bats cool enough that the Sox had a shot at catching up.

“Our hitters, they score a lot of runs for us,’’ Aceves said. “We just try to keep the hitters on the opposite team below five runs, and we’ll be fine.’’

Wheeler said he never loses faith in the offense. It doesn’t matter the deficit; he believes the bats can come alive at any point in the game.

The Sox strung together a few hits and walks in the fifth inning to put four runs on the board. They added three more in the eighth.

It was enough to scare the Blue Jays a bit by the end of the game - which seemed unfathomable during the early shellacking.

“We just came up a little short today,’’ Wheeler said. “We battled up until the very end. That’s the most impressive thing about it. This group never quits.’’