THIS STORY HAS BEEN FORMATTED FOR EASY PRINTING
Red Sox 10, Astros 4 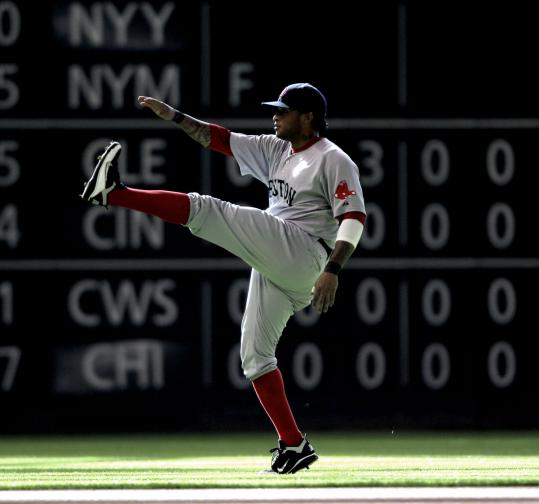 Outfielder Darnell McDonald gets in some stretching before the Red Sox took on the Astros in the middle game of the three-game series in Houston. (David J. Phillip/Associated Press)
By Michael Vega Globe Staff / July 3, 2011

HOUSTON - Andrew Miller said there was no way to predict it.

Given the way he was forced to start the season at Triple A Pawtucket to sort out his control issues, who would have ever thought the 26-year-old lefthander would find himself in the Red Sox’ rotation midway through the season?

“I didn’t predict it would happen sooner or later,’’ Miller said. “I was just worried about going down there and putting the work in and doing what I thought would get me to competing back at this level, which was where I wanted to be.’’

Last night, there he was, toeing the rubber for the Red Sox in a 10-4 victory over the Astros.

The Minute Maid Park crowd of 39,021 was treated to a fireworks display during and after the game as the Sox erupted for 13 hits, including three doubles and homers by Yamaico Navarro and Darnell McDonald.

“I went out there and felt like I normally do for a start,’’ said Miller, who gave up two runs on sev en hits, including a leadoff homer by Hunter Pence in the sixth, to go along with two walks and three strikeouts in six innings of work.

“I just tried to treat it like any other one and throw a lot of strikes and make them put it in play,’’ Miller said. “Fortunately, I was able to do that today and we were able to put more runs on the board than they were.’’

The offensive explosion - sparked by a three-run first inning against Astros starter J.A. Happ - enabled Miller (2-0, 3.06 ERA) to remain unbeaten in three starts this season and earn his second victory. Both wins came on this nine-game interleague road trip, which helped the Sox climb above .500 (9-8) vs. the National Leaguers.

“He was a mature enough kid to go to Triple A,’’ Francona said. “I’m the one who gets to sit here and talk about it, but Rich Sauveur [Pawtucket pitching coach] and Ralph Treuel [minor league pitching coordinator] and those guys - and him - they did a great job and now he can help us win games. It’s exciting.’’

Wasting little time, the Sox jumped on Happ (3-10) in the first inning.

Jacoby Ellsbury (1 for 4, 2 runs), a late scratch in Friday night’s 7-5 win because of illness, returned and got things going with a leadoff walk.

Dustin Pedroia (3 for 5, with an RBI and a run) advanced Ellsbury to third when he reached on a sharply hit groundball to short. Astros first baseman Carlos Lee was charged with an error when he mishandled the throw from Clint Barmes, enabling Ellsbury to go to third.

Adrian Gonzalez (3 for 5, 3 runs, 1 RBI) singled to right to score Ellsbury. Kevin Youkilis (3 for 5, 1 run, 1 RBI) followed with a single to left that loaded the bases for David Ortiz, who drew a start at first base for the second time on this road trip.

Ortiz drew a walk to make it 2-0. The bases remained loaded for Jarrod Saltalamacchia who grounded into a 5-4-3 double play that scored Gonzalez, who started in right field but shifted to first in the sixth.

Miller got off to a dubious start last night by giving up a leadoff triple to Michael Bourn.

Former Sox farmhand Angel Sanchez drove in Bourn with a single to center. Pence then reached on yet another hard-hit ball that went scorching past the mound. After Lee flew to left, Jason Michaels hit into a 6-4-3 double play, getting Miller out of a jam.

“Andy went out and it was a tough first inning,’’ Francona said. “They hit some balls hard and to get out of it with just one [run], he settled down and pitched.’’

The Sox tacked on a run in the fifth when Ellsbury doubled to right and scored on Pedroia’s double to left, making it 4-1.

Astros catcher J.R. Towles landed a glancing blow on Miller when his hard-hit comebacker to the mound grazed Miller’s back. Pedroia collected the ball and threw out Towles at first.

“It just skimmed across my back and so it was no big deal,’’ Miller said. “I wasn’t worried about it and I was able to pitch afterward. They hit a lot of balls up the middle, it seemed like. You just try to get out of the way and fortunately Dustin was able to make a nice play.’’

Pence greeted Miller with a leadoff homer in the sixth, making it 4-2, but the lefty got out of the inning when he got Michaels to ground into a 4-3 double play and Chris Johnson to ground out to the mound.

Making his first appearance since being called up from Pawtucket Thursday, Navarro pinch hit for Miller in the seventh and walloped his first major league homer to left off Happ, giving the Sox a 5-2 lead.

The Astros threatened in the seventh, loading the bases with two out against Alfredo Aceves, who gave up back-to-back singles and a walk before handing it over to Daniel Bard.

Bard walked Pence to make it 5-3 but Bard got out of the jam when he got Lee to ground to Youkilis, who forced Pence at second.

“We like him pitching to the most important, pivotal time of the game and that was it,’’ Francona said of Bard. “He pitched out of the seventh and he was done, but the game was on the line and that’s when we want him pitching.’’

The Sox responded in a huge way in the eighth, erupting for four runs, highlighted by McDonald’s three-run homer off reliever Fernando Abad.

“That’s the Darnell we saw last year,’’ Francona said. “He got a ball he could reach and drove the heck out it.’’

McDonald’s second homer of the season came on a 2-and-0 offering from Abad that cleared the train tracks in left.

It proved a much better start to the second half of the season than the first. For the Sox - and for Andrew Miller.