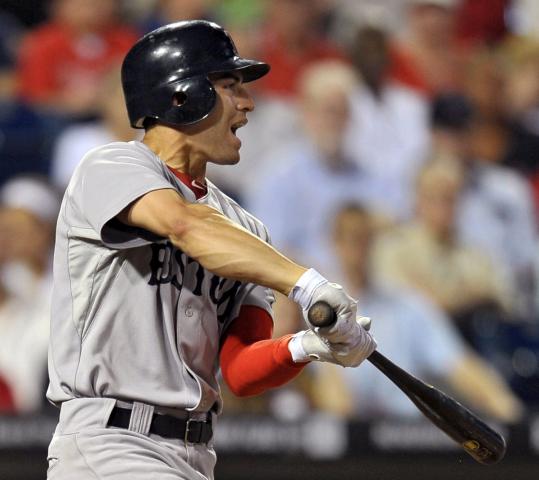 PHILADELPHIA — First of all, nobody’s been able to hit Cliff Lee lately. It shouldn’t be shocking that a subpar Red Sox lineup did nothing (two hits and two walks) against the lefthander in last night’s 5-0 loss to the Phillies. Secondly, the Sox are usually rewarded when they exercise patience with their players — David Ortiz, Jed Lowrie, etc.

But there are warning signs with Darnell McDonald and Mike Cameron that indicate the club’s patience might be running out.

Josh Reddick keeps sitting against lefties, but that may not continue.

Carl Crawford (hamstring) has been missed, even though he hasn’t had a great season. He’s eligible to come off the disabled list for the series finale in Houston Sunday and that could mean the end of McDonald’s tenure in Boston.

The Sox lineup has been so feeble lately they will likely go with Ortiz at first base and Adrian Gonzalez in right field tonight. They shouldn’t have to do something this drastic, but they will for at least one night.

Cameron, who has always been an athletic, youthful player, is starting to look like a 37-year-old. Cameron and McDonald have combined for 13 hits in 94 at-bats against lefthanded pitchers and general manager Theo Epstein, who is traveling with the team, won’t let that continue much longer. The $22 million J.D. Drew-Cameron platoon hasn’t worked very well.

Right field needs to be a productive position and as June comes to a close, it’s been far from it: .206, 7 homers, and 27 RBIs combined from Drew and Cameron.

The Sox will probably do what they never wanted to do — trade a prospect for an established righthanded hitter.

Here is a sample of the outfielders the Sox may be looking at:

1. Carlos Beltran, Mets — In a perfect world, this is their man. Beltran is a switch-hitter and the Sox could pick up the rest of his $18 million deal and make him a No. 6 or 7 hitter. The Sox did a lot of research on Beltran at the winter meetings before they signed Crawford. Beltran still has enough mobility to play right field at Fenway and in the American League’s bigger ballparks.

The problem is he might not yet be available. If the Mets feel they’re within striking distance in mid-July, they might hold on to him.

2. Jeff Francoeur, Royals — He could be the easiest to acquire. He’s a very good right fielder with one of the strongest and most accurate arms in baseball. The Sox have scouted Francoeur a lot and may have already made inquiries. Francoeur strikes out a lot and is not a typical Red Sox OBP hitter, but they’ll take his power. He’s hitting lefthanded pitching at a .329 clip with 5 homers and 17 RBIs. This former Brave used to carry a Red Sox Mastercard, so he loves the team. His dad lived in Massachusetts.

3. Josh Willingham, A’s — Willingham is on the disabled list with a strained Achilles’, but he’s one of the most sought-after righthanded hitters out there. He could even be a third catcher, but an issue would be his ability to cover ground in right and he’s hitting only .211 vs. lefthanders. He is considered a left fielder, but if the price were right, the Sox might consider this move.

4. Ryan Ludwick, Padres — Another deal between these franchises? Ludwick can play the outfield well and hits lefties at a .295 clip. Seven of his 10 homers have come off southpaws. Ludwick also earns $6.8 million, which the Padres would love to take off their books. Ludwick and Heath Bell will be the players Padres GM Jed Hoyer will entertain offers for. Hoyer and assistant GM Jason McLeod know the Sox’ system.

5. Michael Cuddyer, Twins — The free-agent-to-be would be a nice pick-up because he’s a dirt-dog type who could also protect the Sox at the corner infield positions. Might be a tougher deal because the Twins, as usual, have turned things around and with a hot second half they could force their way back into contention. Cuddyer is crushing lefthanded pitching (.380 with 6 home runs). He’s in the final year of a four-year, $33.5-million deal.

6. Coco Crisp, A’s — Crisp is an excellent outfielder with a weak arm but he knows Fenway and will be available. He’s struggled vs. lefties (.235).

7. Carlos Quentin, White Sox — The Braves are pursuing Quentin hard. Not sure the Red Sox could match up because the White Sox would be looking for a front-line starter in return for the slugging outfielder.

8. Magglio Ordonez, Detroit — Would the Tigers consider a Cameron-Ordonez swap? Both players have struggled and maybe a change of scenery would do them good.

9. Ty Wigginton, Rockies — The Red Sox would really love to have a Bill Hall-type player. Wigginton has played the corner outfield spots sparingly, staying mostly in the infield. But he’s a righthanded bat with pop. He’s hitting .270 with 12 homers and 32 RBIs. The 33-year-old is hitting lefties at a .289 clip in 45 at-bats.

10. Ryan Spilborghs, Colorado — Is he better than what they have? Spilborghs, 31, has been on Boston’s radar over the years. He’s hitting .255 vs. lefties.

There isn’t a perfect answer to the righthanded riddle. Devoting a small fortune to right fielders already, the Sox won’t break the bank for someone unless that someone gives you performance beyond this season. Perhaps when Crawford gets back, when Ortiz is playing more, and when Lowrie returns this situation won’t be an issue. But for now, with a good sample size, there’s a righthanded need.