THIS STORY HAS BEEN FORMATTED FOR EASY PRINTING
Pirates 3, Red Sox 1

Sox fail to cash in

A lack of timely hitting costs them 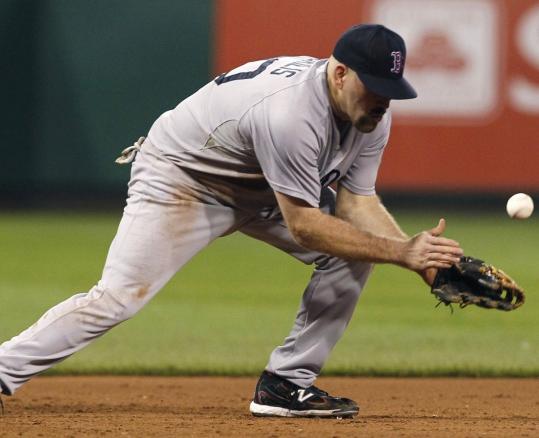 Kevin Youkilis misplayed a potential double-play ball in the sixth, and the Pirates converted the error into a run. (Jason Cohn/Reuters)
By Peter Abraham Globe Staff / June 25, 2011

PITTSBURGH — David Ortiz sat waiting for his opportunity all night, knowing that Red Sox manager Terry Francona would spring him on the Pittsburgh Pirates at just the right time.

His chance came in the eighth inning. With runners on second and third, two outs, and the Sox trailing by two runs, Ortiz walked slowly to the plate.

The thousands of Red Sox fans who took over PNC Park stood and cheered. They, too, had been waiting.

It was at that moment a near-perfect summer night was ruined by a burst of rain.

“First of all, what’s wrong with Mother Nature?’’ Ortiz said. “I’m just walking to the plate and it started pouring. What’s up with that?’’

Ortiz fouled off three straight two-strike pitches from Jose Veras, stopping at one point to get a towel and wipe his face. He then grounded to shortstop, an anticlimactic ending to a dramatic moment.

“What can you do? You just go out there and battle,’’ Ortiz said after the Pi rates beat the Sox, 3-1.

Ortiz exemplifies what the Sox have been going through of late. One of the hottest hitters in baseball earlier this month, he is hitless in his last 11 at-bats and hasn’t gotten a ball out of the infield.

The Red Sox, meanwhile, have dropped three straight and four of their last six. An offense that was unstoppable a few days ago has scored two runs in the last 19 innings. The Sox left 11 runners on base last night, going hitless in 11 at-bats with runners in scoring position.

“We had it going so good for so long,’’ Francona said. “You want the good streaks to be long and the bad ones to be short.’’

Interleague play has traditionally been a time for the Sox to pile up victories. But they are 5-5 this season with eight road games left to play. That means using Ortiz once a night or putting the defensively challenged designated hitter at first base.

“We miss David, but we knew this was coming. We still have to find a way to score,’’ shortstop Marco Scutaro said. “This team is still good enough to score some runs.’’

Paul Maholm (4-8) and five relievers held the Sox scoreless over the final eight innings. Other than the ninth, when Joel Hanrahan retired the side in order for his 21st save, the Sox had runners on base every inning.

With Ortiz on the bench to start the game, Darnell McDonald batted fifth for the first time in his career. He left six runners on base and ended three innings before starting the eighth with a single.

“It hurts,’’ said McDonald, who lined out with a runner on second in the first inning, grounded into a force with the bases loaded in the third, and flied to center with two on in the fifth.

The single in the eighth inning snapped a streak of 17 at-bats without a hit for McDonald. He is hitting .122 on the season and is 2 for 20 since coming off the disabled list.

But McDonald was not alone. Adrian Gonzalez had singles his first two times up, giving him six consecutive at-bats with a hit. But when he came to the plate with two on and one out in the seventh inning, he fouled out to the catcher.

“We couldn’t push runs across. We had opportunities,’’ Francona said.

The third inning was an ugly one for the Sox.

Ronny Cedeno led off by bunting for a base hit. Mike McKenry, a Triple A catcher whom the Red Sox traded to the Pirates on June 12, followed with a sinking line drive to right field.

Mike Cameron tried to make a diving catch and the ball bounced past him for a double. Lester then inexplicably walked Maholm, a .111 hitter this season, on six pitches to load the bases.

“Obviously with the pitcher, you’re not trying to walk him,’’ Lester said. “Just trying to make him hit my pitch.’’

Jose Tabata followed with a ball down the third base line that deflected off the base as Kevin Youkilis tried to make a backhanded play. One run scored. A second run scored when Chase d’Arnaud grounded into a double play.

Defensive mistakes gave the Pirates another run in the sixth inning.

Neil Walker led off with a single that escaped the dive of Youkilis. Matt Diaz followed with a grounder to third that looked like a double play before Youkilis took his eye off the ball and it went into left field.

Lyle Overbay followed the error with an RBI single to right.

“We didn’t help [Lester] out a whole lot,’’ Francona said.

The Sox will send Tim Wakefield to the mound tonight. It will be his second career start against the Pirates, the team he came up with before joining the Red Sox in 1995.

“A couple of days of this is enough,’’ Scutaro said. “We need to score some runs.’’