THIS STORY HAS BEEN FORMATTED FOR EASY PRINTING
Red Sox 14, Blue Jays 1 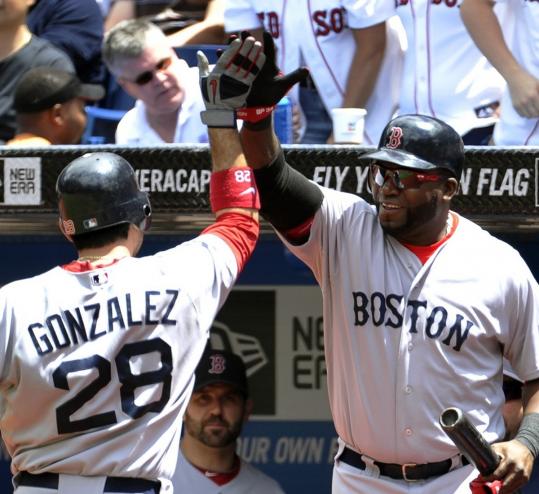 TORONTO — When they assembled for spring training four months ago, this was the team the Red Sox thought they had. Relentless on offense, deep in pitching, and capable of putting together long stretches of success.

That they somehow lost the first six games of the season, painful as it was at the time, now seems almost comical.

The Sox pummeled the Blue Jays again yesterday, 14-1, at Rogers Centre. That’s nine wins in a row, the longest streak in the majors this season.

For David Ortiz, who drove in four runs, it sparked memories of the powerhouse teams that won the World Series in 2004 and ’07.

“Very dangerous,’’ he said. “This team is very dangerous right now. I have seen this before.’’

The current road trip, which continues tomorrow night against Tampa Bay, has been a testament to what the lineup is capable of. In six games against the Yankees and Blue Jays, the Sox scored 60 runs, hit .330, and collected 33 extra-base hits.

The Sox outscored the Blue Jays, 35-6, over the weekend. And Terry Francona considers Toronto manager John Farrell, his former pitcher coach, a close friend. Imagine if he didn’t.

“That’s a good weekend. You can’t count on that very often,’’ Francona said. “That doesn’t happen all the time. You take it when you get it.’’

The Sox had 17 hits against five Toronto pitchers, 10 for extra bases including home runs by Ortiz, Adrian Gonzalez, Dustin Pedroia, and Kevin Youkilis.

“When you’re losing games and you have a good team, it’s hard to figure things out sometimes,’’ Ortiz said. “Sometimes you figure it out and what is happening right now is what happens.

“That’s why everybody was going crazy when we were losing all those games at the beginning of the season. Because if you go position by position, you can match this team against anybody in the league. It’s what everybody expected.’’

Gonzalez got the scoring started with a two-out home run off Kyle Drabek (4-5) in the first. Drabek walked Marco Scutaro and Jacoby Ellsbury to start the third inning. Gonzalez drove in another run with a ground out before Youkilis singled in another to make it 3-0.

The Red Sox sent 10 batters to the plate in the fifth inning and scored six runs. The first five came in a span of five batters.

Ellsbury singled and scored on a home run by Pedroia. Since having his sore right knee checked out Thursday and treated with a lubricating substance, Pedroia is 7 for 13 with six RBIs in three games. His batting average has climbed from .247 to .262.

“I’m still working and doing everything. My knee is starting to feel better and that helps,’’ Pedroia said.

Gonzalez followed the home run with a double to left field. Drabek then walked Youkilis before leaving a low fastball over the plate that Ortiz sent deep into the right-field stands.

“I’m just trying to go game by game and try my best,’’ Ortiz said. “I’m not thinking about anything right now. I try to keep my mind clean and play.’’

Youkilis, Ortiz, and Jarrod Saltalamacchia had RBI doubles in the sixth inning against Luis Perez. Youkilis added a two-run homer in the ninth inning.

After getting Saturday off, Youkilis was 3 for 4 with two walks and four RBIs.

“Days off when you’re grinding it out in a season, sometimes you need them,’’ Youkilis said. “I don’t know if that played a part. But I can’t complain that I got some rest. That could have been a good thing.’’

Red Sox starter Jon Lester (9-2) retired the first 11 batters on just 34 pitches. But the perfect game, no-hitter, and shutout ended in one swing when Jose Bautista lined a ball off the top of the wall in center field in the fourth.

Bautista, who leads the majors with 21 home runs, had gone 49 at-bats without one.

But Lester was otherwise untouched in becoming the first nine-game winner in the league. He allowed two hits, walked one, and struck out eight.

“I’ve been fortunate to be part of some streaks here and some good times, as far as swinging the bat and playing well and pitching well,’’ Lester said. “But I don’t think I’ve ever really seen a stretch like these last nine games we’ve been playing, as far as scoring runs and the way our pitchers have been throwing the ball. It’s been fun to watch and, hopefully, we can keep it going.’’

After losing their first seven games on the road, the Sox are 20-6 away from Fenway Park with victories in 11 of the last 12 games.

“The way this team is playing right now, I don’t think it matters where we play,’’ left fielder Carl Crawford said. “We’re doing exactly what we were supposed to be doing.’’