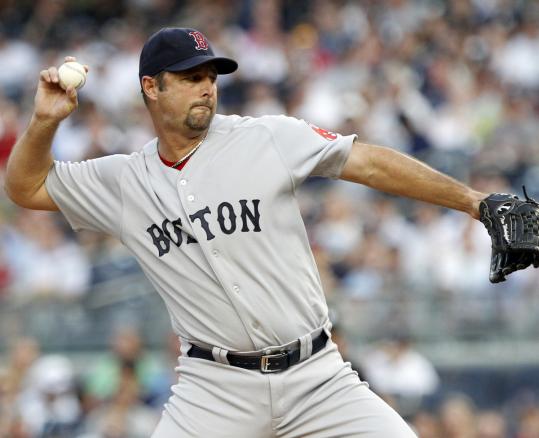 Catcher Jason Varitek didn’t know it was any faster than normal, and pitcher Alfredo Aceves didn’t make a big deal about the extra zip on his fastball last night after the Red Sox completed an 11-6 victory over the Yankees.

But during Aceves’s 3 2/3-inning outing the Yankees might have realized what they let slip away.

Aceves, who joined the Red Sox a few weeks before spring training after he was non-tendered by the Yankees because of back injury concerns, gave up one run on four hits with four strikeouts. He entered the game after starter Tim Wakefield found himself in a sixth-inning jam with the Sox clinging to an 8-5 lead.

With one out and the bases loaded, Aceves got Derek Jeter to ground into an inning-ending double play on a 3-1 pitch. The 28-year-old righthander finished out the rest of the game to earn his first save of the season.

This from a pitcher who went from starter to reliever in mere months.

“That’s not an easy thing to do,’’ Sox manager Terry Francona said. “He’s stretched out and he’s good enough. It’s so valuable. He can start if we need him to. He can change speeds. He can throw three pitches. He can get lefthanders out. It’s terrific.’’

On a night in which the Sox were resting setup man Daniel Bard, Aceves’s flexibility was especially appreciated.

“He’s not just a guy out there eating up innings,’’ Bard said. “He was great in the rotation when we needed him for a couple of weeks, and he’s just as effective out of the bullpen. He’s a really good guy for us to have out there.’’

Aceves, and Wakefield, have had to adjust to changing roles this season, and in the process, both have logged quite a few innings.

“We can’t seem to get everybody healthy at once,’’ Varitek said. “You could tell both [Aceves and Wakefield] were going to be extremely valuable. They’ve had to take the bulk of innings, both of them, and they provide a huge boost. There’s not a letdown in those innings.’’

Both Bard and Francona speculated that playing the Yankees provided extra motivation for Aceves last night.

“You always, when you come back to the team, you want to show them,’’ Francona said. “That’s human nature.’’

Said Bard: “Anyone who’s ever written you off, you want to prove to them [that they’re wrong]. I’m sure that was the case with him, too.’’

Aceves posted a 14-1 record in 59 games with the Yankees in three years. He was 10-1 with 69 strikeouts in 84 innings in 2009, but he was limited to 10 appearances last year before suffering a lower back injury.

This season, he has made 16 appearances, and it appears he might have found his niche as the flexible innings-eater. The adjustments haven’t fazed him.

“It’s crazy, right?’’ Aceves said. “I just pitch my game. I just have a glove and a ball in my hand. I’m always adjusting my mechanics. If you throw the ball nice and easy, it’s better.’’

Aceves didn’t credit the extra giddy-up on his fastball last night to the Yankee Stadium environment or a sense of revenge. But he did enjoy the result.

“I’m an intense guy,’’ he said. “I’m always happy to come here and see my ex-partners. This motivates me. I played the last three years here. I’m just happy to contribute to my team and win.’’