Major relief for Hottovy to get call 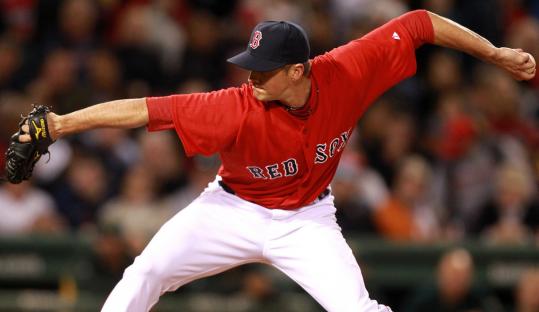 Tommy Hottovy got out of the sixth in his major league debut. (Barry Chin/Globe Staff)
By Peter Abraham Globe Staff / June 4, 2011

Tommy Hottovy has spent enough time in Portland to run for mayor, and given all the people he knows there, he might just win.

The lefthander played parts of six seasons with the Double A Sea Dogs, a lifetime for a prospect. He shared a clubhouse with Clay Buchholz, Jacoby Ellsbury, Felix Doubront, and others on their way to the big leagues but never got the call himself.

It finally came Thursday, when Hottovy was summoned to Boston to replace the injured Rich Hill. Wearing No. 68, he took his place in the bullpen at Fenway Park last night.

Hottovy made his debut in the sixth inning, coming in with two outs and a runner on. He got David DeJesus to ground to second. That earned him a handshake and slap on the back from Terry Francona at the top step of the dugout. Adrian Gonzalez saved him the ball.

“A great feeling,’’ Hottovy said after the Red Sox’ 8-6 victory. “I was a little nervous but it worked out well.’’

Hottovy, who turns 30 next month, has appeared in 169 minor league games over eight seasons since being drafted out of Wichita State in 2004.

He worked as a starter for four years before undergoing reconstructive elbow surgery. While rehabilitating in Fort Myers, Fla., Hottovy took a job as a waiter at the Arizona Pizza Company to make extra money.

It was around that time he called his then-fiancée, Andrea, to discuss giving up baseball.

“She said, ‘You owe it to yourself to see where you can go healthy.’ From that moment on, there was no looking back,’’ he said.

The timing was perfect. When Hill tore his elbow ligament Wednesday, the player development staff recommended Hottovy. Like Hill, Hottovy throws sidearm and creates angles that make it tough for lefthanded hitters to pick up the ball.

Hottovy has pitched 8 1/3 innings for Triple A Pawtucket, allowing one earned run on four hits with one walk and 10 strikeouts. He has struck out 28 batters in 27 innings this season.

“I think this is a situation where we need to listen to our player development people as we do and they thought this was the right guy,’’ Francona said.

Hottovy rescued his career by switching to a sidearm delivery last year.

“I knew to make myself successful I had to get lefties out,’’ Hottovy said.

When the Sox signed a large group of relievers over the winter, Hottovy was sent back to Portland.

“It’s been a long time coming. A long time hoping to come is more like it,’’ Hottovy said. “It’s been a whirlwind 24 hours here, Just trying to soak it all in and try to enjoy the experience. I’m here to do a job and just looking forward to doing that.’’

Hottovy woke his wife up with the news Thursday. She is 34 weeks pregnant with the couple’s first child and can’t travel from their home in Kansas City, Mo.

Daisuke Matsuzaka was shifted to the 60-day disabled list to make room for Hottovy on the 40-man roster. With lefties Doubront and Andrew Miller at Pawtucket, Hottovy will have to fight to stay with the Sox.

Hill will seek a second opinion before making that decision.

“It will happen rather quickly just to get the ball rolling so we don’t waste any time as far as the rehab process,’’ he said.

Hill, 31, had pitched remarkably since joining the Sox last September, going 15 outings without giving up a run.

“The frustrating part is that you find a niche for yourself in the bullpen. To have something happen that is possibly season-ending, it’s something that’s tough to swallow,’’ he said. “But at the same time, if it is a surgical procedure that needs to happen, the success rate is there and you rehab.’’

Hill had shoulder surgery in 2009 and returned as a reliever. The Milton native is determined to make it back again.

Hill’s loss was deeply felt by his teammates.

“He’s a great kid,’’ Francona said. “He lives in Southie and he works so hard during the winter and he wanted an opportunity and he was making the most of it, so it hurts when he gets hurt.’’

Shuffling up The Sox will use Monday’s offday to reconfigure their rotation. Jon Lester, Buchholz, and Josh Beckett will face the Yankees in New York starting Tuesday.

Matinee today Just a reminder, the Sox shifted the time of today’s game to 1:10 p.m. because of Game 2 of the Stanley Cup Final between the Bruins and Canucks tonight . . . Marco Scutaro, out since May 16 with a strained rib cage muscle, will travel to Durham, N.C., this morning to start a rehab assignment with Pawtucket. “It should just be a couple of days with Pawtucket, maybe until Monday,’’ he said . . . Darnell McDonald is three games into a rehab assignment at Pawtucket and is 4 for 9. He was placed on the disabled list week with a quadriceps strain . . . The Sox are raising money to help tornado victims in Massachusetts and Joplin, Mo., the hometown of Buchholz’s wife, Lindsay. Buchholz donated $500 for each of the five strikeouts he had last night.