THIS STORY HAS BEEN FORMATTED FOR EASY PRINTING
Red Sox 8, Athletics 6 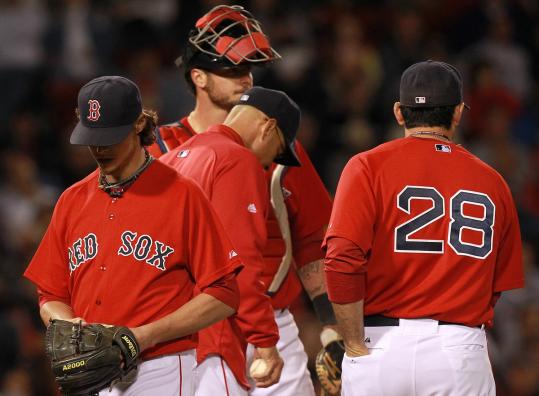 Carl Crawford had only two hits in his previous 20 at-bats when he came to the plate in the seventh inning at Fenway Park last night. The Red Sox, down by a run against the Oakland Athletics, had the bases loaded with two outs.

Watching the drama unfold from first base, David Ortiz was sure Crawford would deliver.

“We got money,’’ said Ortiz, referring to Crawford’s three walkoff hits earlier this season. “That’s the guy you want in there.’’

Big Papi is wise. Crawford shattered his bat, but hit the ball well enough to drop it into center field for a two-run single that sparked the Sox to an 8-6 victory.

“I ran to first with a piece of the handle in my hand,’’ Crawford said. “But you know what? I’ll take it. I’ll take whatever I can get.’’

Knowing that Crawford was 7 of 68 (.103) against lefthanders this season, Oakland manger Bob Geren called in Brian Fuentes to face him.

Crawford got ahead, 3 and 1, before taking a strike. The next pitch jammed him but he got enough wood on it.

“By no means did he crush that ball,’’ Sox manager Terry Francona said. “But he stayed on it enough and it found the outfield grass and made everybody happy.’’

Crawford said having succeeded before in late-inning situations helped relax him at the plate.

“You can slow everything down and understand what you’re trying to do,’’ he said. “I was trying to work him a little bit with the bases loaded.’’

Jenks had an adventurous seventh inning. With the Sox trailing, 6-5, he allowed a leadoff double by Josh Willingham. With one out, Jenks balked Willingham to third, then walked Kurt .

It was the fourth balk of the season by the Sox, one more than all of last season.

The scouting report on Daric Barton indicated his dislike of quick pitches. Jenks rushed his delivery, intending to throw a fastball low and in. He left it high but Barton hit a ground ball to short and Jed Lowrie started a double play that got the Sox out of the inning.

It was a big moment for Jenks, who this season has done little to create confidence.

“No one’s worried about Bobby. He’s got great stuff,’’ catcher Jarrod Saltalamacchia said. “He’s going to go out there and he’s going to battle and he’s not going to give in.’’

After Crawford gave the Sox the lead, Saltalamacchia’s long solo homer in the eighth inning helped secure it.

“That’s a big win for us considering we were behind twice,’’ Crawford said.

Oakland beat up Buchholz with jabs in the first inning, scoring four runs on five singles.

David DeJesus singled with one out and took third on a single off the wall in left by Willingham. Hideki Matsui grounded to shortstop, driving in a run as Willingham was forced.

“There’s a certain time when pitches aren’t doing what you want them to do. It’s hard to pitch with one pitch,’’ Buchholz said.

Buchholz had left his previous start with a sore lower back, a condition he felt “a little bit’’ last night.

The Sox took Buchholz off the hook with two runs in the first, a run in the second, and two more in the third. Ortiz had two hits and two RBIs in the comeback.

Given the lead, Buchholz gave it away in the fourth inning. His error on a pickoff attempt and a wild pitch helped Oakland score a run. After Barton’s two-out single in the fifth, Francona emerged from the dugout and Buchholz was done after 99 pitches.

Buchholz has allowed five earned runs three times in the last two seasons against Oakland. He has a 7.24 earned run average in five career starts against the Athletics.

Trailing, 6-5, the Sox rallied against Joey Devine (0-1) in the seventh. Adrian Gonzalez (3 for 5, now hitting .335) had a one-out double before Kevin Youkilis was hit by a pitch and Ortiz walked.

Lowrie popped to shortstop, putting the onus on Crawford.

“I was just hoping that ball was going to get through,’’ he said. “I watched it all the way until it dropped. It felt really good after it did.’’