THIS STORY HAS BEEN FORMATTED FOR EASY PRINTING
Red Sox 14, Indians 2 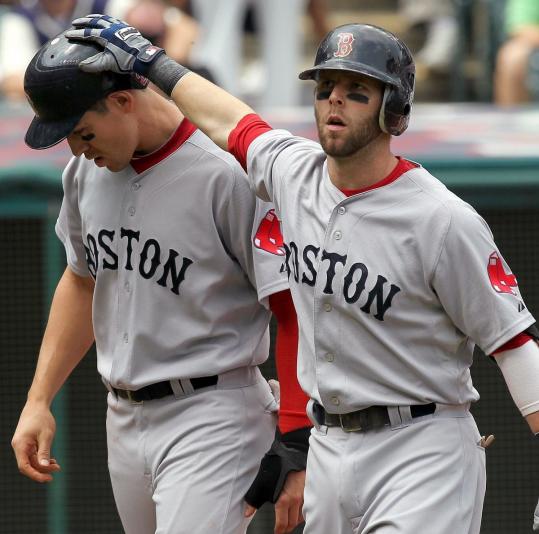 CLEVELAND — Dustin Pedroia could barely walk when he left the field in the eighth inning Monday night, such was the pain in his left foot after he slipped on second base and fell. That convinced Red Sox manager Terry Francona to give his second baseman the next day off.

Pedroia also needed some time to reflect on his poor performance at the plate. He has struck out at a rate far above his norm, and nearly all of the hits he did have were singles.

When the Red Sox arrived here Monday, Pedroia had driven in two runs for the entire month. Two.

“When he was sitting on the bench watching the game yesterday, I felt bad. I’m used to seeing him hitting rockets. Seeing him sitting there was weird.’’

Pedroia was back in the lineup yesterday, and before the first inning had ended, the rockets had returned. Pedroia belted a two-run homer, then got up again and had an RBI single to spark the Red Sox to a 14-2 thrashing of the Indians.

With Pedroia playing a leading role, the Sox sent 12 batters to the plate in the first inning and scored seven runs. They left Progressive Field having taken two of three from the team with the best record in baseball.

Carl Crawford had his best day with the Sox, going 4 for 4 with a home run, two doubles, and two RBIs. Ortiz and Jarrod Saltalamacchia also homered. Jacoby Ellsbury was on base five times, getting three hits and walking twice. Newcomer Drew Sutton also had three hits.

In all, the Sox had 20 hits against six pitchers. Every starter had at least one hit except for Jed Lowrie.

“It’s nice when you get that kind of support,’’ said Jon Lester, who threw six shutout innings to improve to 7-1.

For the Sox, the game might be remembered as the day Pedroia got going. It had been 34 games and 136 at-bats since he last hit a homer, the longest drought of his career. But when Cleveland starter Mitch Talbot left a cut fastball over the plate, Pedroia launched it over the fence in left-center.

“We all know when he gets hot, he’s going to get real hot,’’ Francona said. “That was promising.’’

Pedroia conceded he needed the day off, with a foot that needed treatment along with some other bumps and bruises.

“This year’s kind of been tough,’’ he said. “I’m managing a lot more than I have. It has taken some time to get used to. Some days it feels good and other days it doesn’t. I don’t think it has affected me that much.’’

The statistics tell a different story. Pedroia is hitting .249, 56 points below his career average. His on-base percentage has stayed steady thanks to 32 walks, but his slugging percentage has dipped 130 points. Pedroia also has struck out 36 times, 16 fewer times than he ever has over an entire season.

Pedroia has a full-body swing, launching himself at the ball with everything he has. He lands on his left foot, the same one held together by a stainless steel screw. That has thrown off his timing.

“I’m pretty violent on my front side and it’s my front foot,’’ Pedroia said.

But seconds later, Pedroia turned on the bravado, denying his foot was an issue.

“The last three weeks that I’ve had a tough time, you go through that. But there will be three weeks when I can’t get out. The times when it’s tough, you have to find ways to get hits and do other things to help us win.’’

Francona has resisted the idea of dropping Pedroia in the order, knowing how much confidence plays into his game. Yesterday’s home run was partially a reward for the manager, too.

“Tito knows, we all know: Leave the guy alone and he will hit,’’ Ortiz said. “He’s the life and soul of this team. He feels like crap right now but he’s fighting. Trust me, he’s fighting.’’

The same is true of the team. The Sox have won 10 of 12 and have the third-best record in the American League. After a 2-10 start, they have gone 25-12. Taking two of three from Cleveland was the latest bit of validation.

“It’s fun to play teams like this,’’ said Francona. “They were feeling really good about themselves, as they should. We came out and played pretty good baseball.’’

Or as Pedroia more succinctly put it, “Get on the elevator, it’s going to the top.’’