Beaning of Byrd affects all 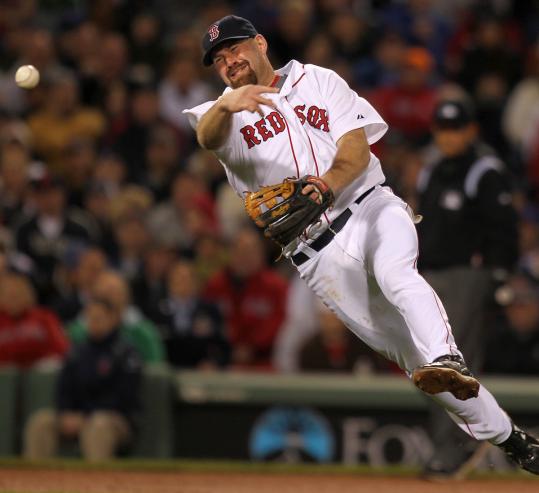 Kevin Youkilis throws out the Cubs’ Aramis Ramirez on a topper to third in the fifth inning. (Bill Greene/Globe Staff)
By Michael Vega Globe Staff / May 23, 2011

When Marlon Byrd was hit in the left eye by an Alfredo Aceves pitch in the second inning Saturday night, the reaction of Red Sox third baseman Kevin Youkilis was telling.

Youkilis recoiled in horror and winced as the Cubs center fielder hit the ground, holding his head and kicking his legs in pain.

“It’s definitely scary,’’ said Youkilis, who has been by a pitch a franchise-record 72 times. “It didn’t sound good. I thought it hit him in the helmet. It’s definitely one of those things that could be career-ending. You never want to see that. It’s tough.

“Hopefully, he’s doing better and hopefully it’s not a mental block for him.’’

According to Cubs spokesman Peter Chase, Byrd suffered multiple facial fractures and was placed on the 15-day disabled list. He was released yesterday after spending the night at Massachusetts Eye and Ear Infirmary, was scheduled to return home last night with the team, and will be evaluated in Chicago.

“That’s scary what happened,’’ said Sox manager Terry Francona. “I don’t care what uniform you’re in, that makes you nervous.’’

“Marlon’s a good guy and he’s played a lot of ball, but he’s probably never had that happen to him,’’ Youkilis said. “Hopefully, he can rebound and play and be OK.’’

Youkilis went to the plate in the fifth inning Saturday against Carlos Zambrano fully expecting to get hit.

And he was right.

“I knew I was going to get hit,’’ Youkilis said. “It seems like I’m always the one getting hit. I don’t know, but for some reason when this stuff happens, I’m the guy they want to hit.’’

Youkilis said, “I thought Zambrano did the right thing. I mean, we hit one guy [Kosuke Fukudome] on the kneecap and we hit another guy in the face. It was a good chance I was going to get hit and Zambrano did it the right way.

“He threw right at my hip. That’s where you throw when you’re going to hit somebody. My hat goes off to him. He did it the right way. Some people might say that’s bull, but no, it’s not. We hit two of their guys and it wasn’t on purpose, it’s part of the game.

“I was just very fortunate that he did it the right way and handled it with class.’’

Youkilis said he looks at the record with a sense of pride, taking it as a sign of respect from the opposing team “in kind of a twisted way.

“The thing that [stinks] is that a lot of them are intentional. I mean, not a lot of them, but the one last night was intentional, I think. But like I said, it was deservedly so. Somebody’s going to get hit. It’s part of the game.’’

Two progressing Reliever Bobby Jenks, on the 15-day DL with a right biceps strain, played catch and will throw a side session tomorrow in Cleveland.

Francona said John Lackey, on the DL with a right elbow strain, threw a flat-ground session. The manager indicated Lackey seemed to respond well to the cortisone injection in his right elbow.

“He’s done really well,’’ Francona said of Lackey. “The idea was, hopefully, the shot knocks out what he had going on in his elbow and once he’s pain-free he’s allowed to throw and build up again and that’s what he’s doing.

“He was really upbeat [Saturday] night, which was really good to see.’’

They won’t miss him The Sox seemed to catch a break when the Cubs were forced to scratch tough righthander Matt Garza, whom the Sox were familiar with from his days with the Rays.

“He’s a good pitcher,’’ Youkilis said of Garza, who was scratched because of a sore elbow. “When he was scratched, we weren’t like, ‘Oh, damn, we really wanted to face him.’ You definitely don’t want to face the best pitchers.’’

Russell, who entered with a 1-4 record (6.26 ERA), pitched three scoreless innings, allowing three hits, before he gave up a pair of runs on two hits and a walk in the fourth to spot the Sox a 2-0 lead. He was greeted in the fifth by Jarrod Saltalamacchia’s leadoff homer, extending Boston’s lead to 3-0. One batter later, Russell’s night was done after he allowed Jacoby Ellsbury to reach on an infield hit.

Yo, Adrian! Adrian Gonzalez went 4 for 4 with a double and two runs, giving him a pair of four-hit games in his last three contests. He has collected multiple hits in eight of his last 13 games, hitting .431 (25 for 58) in that stretch. “He’s such a professional hitter,’’ Francona said afterward. “Hits the ball to left field, fights off pitches, gets something he can handle, hits it off the wall. He’s a really good hitter and he’s in a really good period, too.’’ . . . Youkilis extended his hitting streak to 10 games when he hit his first triple of the season off reliever Kerry Wood in the seventh . . . In the last 10 games, catchers Jason Varitek and Saltalamacchia have hit a combined .375 (12 for 32) . . . Jed Lowrie’s sacrifice fly to center that drove in the game’s first run was his 16th RBI vs. lefthanded pitching . . . More than 2,000 runners, including hundreds of active duty military service members, crossed home plate at Fenway Park yesterday morning as part of the 9-kilometer “Run to Home Base’’ presented by New Balance. The event, now in its second year, raised more than $2.6 million to fund the Red Sox Foundation and Massachusetts General Hospital Home Base Program, which provides clinical care and support services to veterans returning from the wars in Iraq and Afghanistan.