With Wakefield, he’s catching on 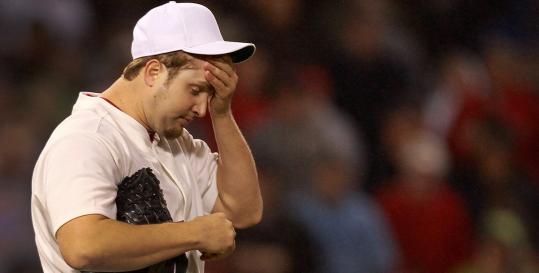 Jarrod Saltalamacchia said catching Tim Wakefield’s knuckleball has been “fun’’ this season. That is not a word often associated with the task of plucking that pitch out of the air.

“It’s different, but I kind of like it,’’ said Saltalamacchia, who is scheduled to catch Wakefield tonight when the Red Sox finish their series against the Chicago Cubs. “It’s not like catching anybody else.’’

According to Saltalamacchia, a catcher has to let the ball travel to the mitt and not guess where it will go.

“It you try and reach for it, it could dip and hit the ground,’’ he said. “You need patience. But I think I’ve done OK. You can’t be intimidated.’’

For manager Terry Francona, finding a catcher who can handle Wakefield is a yearly challenge. For somebody with no previous experience with a knuckleball, Saltalamacchia has been remarkably adept.

“I think he’s done a pretty good job,’’ Francona said. “For all those years, we always panicked — maybe I should say I did — about somebody catching Wake. We had such a difficult time doing it.

“I think [catching instructor] Gary Tuck probably has something to do with that. I think his drills and beating those guys up so much, I think the game’s actually sometimes easier. They’ve done a really good job.’’

Wakefield is 0-1 with a 5.40 ERA and will be making his third start of the season. He could have the advantage tonight. Wakefield is 5-3 with a 3.53 ERA in his last 12 starts against National League teams.

Only three Cubs — Carlos Pena, Alfonso Soriano, and Reed Johnson — have significant experience against him.

“You don’t know,’’ said Francona. “It can be hit or miss. When he’s got that pitch working, I’m not sure it matters.

“There are certain types of hitters in the past who have given him trouble. It’s a difficult pitch to gauge. Just hope it keeps fluttering, because when he leaves it up, it can go out in a hurry.’’

Garza a scratch The Sox received some welcome news when the Cubs scratched Matt Garza from tonight’s start because of a sore elbow.

Lackey progressing John Lackey, who had a cortisone shot in his right elbow Monday, played catch for the second straight day.

“He had a good day,’’ Francona said. “He will play catch again [today]. He got there pretty good, pretty aggressively, and didn’t feel anything, which is really good.’’

Lackey and pitching coach Curt Young will meet soon with head athletic trainer Mike Reinold to determine the next step.

“The good news is that he feels good,’’ said Francona. “That’s really exciting for us.’’

Lackey last pitched May 11 and is eligible to come off the disabled list Friday. That’s a short enough span to avoid the usual minor league rehabilitation start.

“I don’t know,’’ Francona said. “We’ll see. He really wasn’t down very long, which is good. When there’s a shutdown of a guy not throwing for a couple of weeks, that kind of interrupts what you’ve done. He really didn’t miss a while lot of time.

“Saying that, there’s a reason he was shut down. If you come back and give that guy the two weeks and all of a sudden he goes seven innings, I don’t know if that’s in anybody’s best interest. So we have to figure that out.’’

Jenks feeling good Bobby Jenks, who has been on the disabled list with biceps tendinitis since May 5, has been playing catch for the last week and is getting closer to throwing off the mound.

“The plan is to let him throw a bullpen [tomorrow],’’ Francona said. “He felt really good about himself today.’’

Jenks has not pitched since May 1 and almost certainly will need a few rehabilitation appearances before being activated.

Getting to know you Sox coaches are getting to know lefthanded reliever Franklin Morales, who was obtained from the Rockies Thursday.

“See what’s going on there, let Curt have his two cents,’’ said Francona. “We want him to pound the strike zone because his stuff is really good.’’

Morales has been in the majors for parts of five seasons but is only 25. The Red Sox believe Young can help unlock what appears to be considerable talent.

“There’s not enough pitching to go around,’’ said Francona. “You’ve got to take some chances sometimes. We’ve already watched tape. We just want to watch him pitch.

“He’s got all the pitches. Pound the zone is going to be important. If he can get to that point, we’ll have [something] because he’s got a good arm.’’

Youkilis heating up Youkilis singled in the fourth inning last night to extend his hitting streak to nine games. He is 14 of 34 with seven extra-base hits and 11 RBIs during the streak. His average climbed from .239 to .280.

“You know what was encouraging?’’ said Francona. “Even when he was chasing, some uncharacteristic swings that we hadn’t seen a lot, he was still being productive and he was still taking his walks.

“Now that he’s starting to swing like he can, it’s really good. He’s always going to take his walks. He’s hitting the ball all over the field; he has extra-base hits. You’re kind of getting the best of both worlds.’’

Minor moves The Red Sox promoted four minor league outfielders. Defensively gifted Che-Hsuan Lin was moved from Double A Portland to Triple A Pawtucket. Speedy Jeremy Hazelbaker moved up from Single A Salem to Portland. Bryce Brentz, who has been tearing up the South Atlantic League at Greenville, has been assigned to Salem. Henry Ramos was moved to Greenville from extended spring training. Brentz was the 36th overall pick of the 2010 draft. He was hitting .359 with a 1.061 OPS. Lin has been with the Sox since 2007 when he signed out of Taiwan. He has improved steadily in his five seasons . . . Louis Zamperini, a 1936 Olympian and World War II veteran, threw out the first pitch along with Julia Ruth Stevens, the daughter of Babe Ruth. Zamperini is the subject of the best-selling book “Unbroken.’’ . . . Cubs second baseman Darwin Barney was in town at the right time. His sister, Darilyn, graduated from Boston University yesterday and he attended the ceremony with his family.