Posada steps up, delivers — an apology 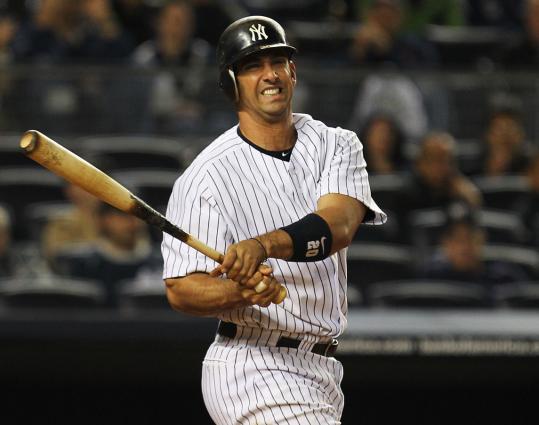 Jorge Posada reacts after missing a pitch while pinch hitting in the eighth (he walked). (Al Bello/Getty Images)
By Nick Cafardo May 16, 2011

NEW YORK — Whether this Yankee melodrama is over will all depend on how well Jorge Posada hits in the near future, but yesterday he stepped up and did the right thing after doing the wrong thing the day before.

Posada, who was not in the Yankees’ starting lineup again last night, since the switch-hitter is 0 for 24 batting righthanded and the Red Sox were throwing lefthander Jon Lester, apologized to manager Joe Girardi, general manager Brian Cashman, and owners Hank and Hal Steinbrenner for asking out of the lineup Saturday night after Girardi dropped him to ninth in the order.

Posada had said he had a back issue — which he never informed Girardi or Cashman about — and also that he needed a day to clear his head because of a so-far dreadful season.

The Yankees announced last night that Posada would not be disciplined, surely a concession to the 39-year-old’s long and meritorious service.

Posada received a standing ovation before pinch hitting in the eighth inning of last night’s 7-5 loss to the Sox. He drew a walk. “That meant a lot to me,’’ he said about the ovation. “I’ve always loved those fans.’’

While all seems to be forgiven, the toughest part for Posada is ahead.

Now he must perform better than his .165 batting average entering the game. If he fails to do so, the Yankees might have to take a more drastic step and think about possibly letting him go. For now, Girardi and Posada remain optimistic that he will turn his season around to salvage not only his self-confidence, but his legacy as one of the greatest Yankees ever.

Posada said his self-confidence hasn’t deteriorated to the point that he doesn’t feel he can turn things around. He decided the first thing he had to do was apologize, to tell everyone he might have offended, including the fans, that he will try to be better from here on out.

“I kind of apologized to [Girardi]. Just had a bad day yesterday,’’ Posada told reporters in front of his locker before last night’s game. “All the frustration just came out. I’ll try to move on and appreciate that you guys [media] let me do that.’’

Girardi, who once competed with Posada for playing time, seemed moved by the conversation the two had.

“We had a nice conversation,’’ he said. “We talked about being emotional and going through struggles and what defines who you are. He apologized and said, ‘I had a bad day,’ and I said, ‘I have had bad days, too. I know it’s hard to struggle, but you’re going to get through this.’ ’’

In describing Posada’s demeanor, Girardi said, “It wasn’t the typical Jorge Posada face. Yeah, he was a little emotional. I was emotional in there because he’s one of my guys. I feel for what he’s going through.’’

Posada’s apology to Cashman came after he lashed out at the GM for making a statement about Posada’s absence to the media during Saturday night’s game. Cashman said he was surprised by the comments, since he said he told Posada and his agents that he was going to speak to the media.

Cashman sat down with Posada before last night’s game. He spoke to the owners about whether there should be any discipline and the consensus was no.

Yankees captain Derek Jeter was mum on the subject Saturday, because he wanted to speak to Posada and get all the facts. Yesterday, Jeter said of Posada, “he’s like a brother to me,’’ and said he didn’t have a problem with what Posada did.

“If I thought he did something wrong, I’d be the first to tell him,’’ Jeter said.

Posada seemed humbled by the entire episode. Always a very passionate player, he allowed his emotions to build to a crescendo Saturday night, and while he still says it was not because of seeing his name ninth in the order, he did say, “All the frustration came out. It was just one of those days you wish you could take back.

“Everything happens for a reason. You learn from your mistakes and I’ll learn from this and move on. People need to understand how everything has happened and why sometimes frustration just comes out. I wanted to let the fans know that I would never back down to anything. Everybody has a bad day and I had a bad one yesterday.’’

Girardi wouldn’t commit to whether Posada would be the designated hitter against Tampa Bay lefthander David Price tonight.

“We know it’s a very difficult thing we’re asking him to do,’’ Cashman said about Posada DHing after being a catcher for so many years.

Posada came to the conclusion we all thought he would. He knew his behavior was wrong, and out of character. And as far off track as he was Saturday, he made a nice comeback yesterday. If he can hit again, prove he’s not done yet, Posada can go out the way he should — his head held high, his jersey retired, and beloved for the rest of his days.