Disorder has been avoided

Batting lower not issue to Crawford 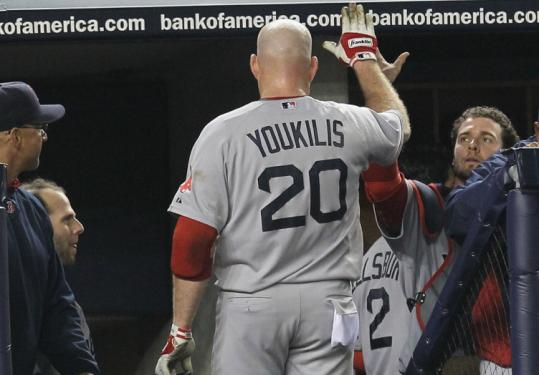 Kevin Youkilis earned praise for hitting a three-run homer in the fourth that tied the game at 4. (Al Bello/Getty Images)
By Peter Abraham Globe Staff / May 16, 2011

NEW YORK — Jorge Posada was so upset at the idea of hitting ninth that he pulled himself out of the Yankees lineup Saturday night and onto the back pages of the tabloids.

Meanwhile, Red Sox left fielder Carl Crawford hit eighth for the 16th time this season. He was back in that spot again last night.

Although he is not as accomplished a player as Posada, Crawford is a four-time All-Star who finished seventh in the American League MVP voting last season. Until this year, he had not hit so low in the order since 2003.

Crawford doesn’t much like hitting eighth but has handled the demotion well. He went into last night’s game hitting .321 in May, a vast improvement from a disastrous April.

The Sox did not sign Crawford to a seven-year, $142 million deal to hit eighth, however.

“Obviously at some point we’d like to move Carl up to the front of the order somewhere when it’s appropriate. Carl’s doing a pretty good job right now, but also affects other people,’’ manager Terry Francona said.

“[Adrian Gonzalez] is the hottest hitter in the game. We like [Dustin Pedroia] hitting second. Jacoby [Ellsbury] just led the league with a hit streak for a while. There are some things to think about.

“If Carl’s getting a lot of hits, whether he’s hitting first or second or eighth, that’s going to help us win. What we need to do is have our guys play to their capabilities and that batting order won’t get talked about.’’

Crawford has tried not to dwell on where he hits.

“You can’t be thinking about all that negative stuff,’’ he said. “Once the lineup is up, you look at it and that’s it and it’s time to play. You don’t want all that stuff to carry over.

“You have guys hitting well in the lineup, so I understand it’s pretty tough to move the spots. My whole thing is I’m not trying to make them do anything they don’t want to do. I’m just trying to play my game and at some point when it’s time to make a move, I know they’ll do it.’’

Francona appreciates how Crawford has handled what some players would consider a slight.

“Carl’s been nothing but professional in everything,’’ he said. “He wasn’t hitting very well at the beginning and he tried harder to be a good hitter. It took him a little longer than everybody wanted. But he won the clubhouse over with his work ethic.’’

For Francona, good communication helps avoid problems like the one the Yankees encountered Saturday.

“We’ve talked to Carl a bunch,’’ he said. “The last thing I want to do is get in the guy’s way. I kind of have an obligation to try and do what’s right for the team and we tell the players that. But we also ask them questions, too. We want to see what they think works for them or what they think helps them.

“I’m sure everybody would like to hit first or second or third. But just try to set it where it makes sense, then communicate that with guys and explain to them why so they understand.’’

Hill finds role Blue Jays manager John Farrell did plenty for the Red Sox during his four seasons as pitching coach. As a parting gift, he may have found them a reliable lefthanded reliever.

It was Farrell who suggested to Rich Hill near the end of last season that he try a sidearm motion. Hill worked diligently over the winter at getting his rhythm and control down, a process that continued in spring training.

At 31, Hill has made a successful transition from starter to situational reliever. After being called up from Pawtucket May 5, Hill has thrown 4 2/3 scoreless innings, allowing two hits with one walk and six strikeouts.

Lefthanded hitters are 1 for 6 against him with righthanders a surprising 1 for 9 with four strikeouts. Hill has been throwing his fastball from 94-96 miles per hour.

“It’s really about being healthy,’’ said Hill, who had shoulder surgery near the end of the 2009 season. “It wasn’t until spring training that I felt like myself again and had the same strength in my arm.’’

Counting spring training and his time with Pawtucket, Hill has given up two earned runs over 29 1/3 innings and struck out 30 with nine walks.

“We thought he was a good matchup guy. But when he went to Triple A he didn’t face just lefties, which is good,’’ Francona said. “He’s started throwing a changeup, a fastball with more velocity than was anticipated, wrapping that breaking ball around their back ankle and he’s brought it here.

“If he throws strikes, his stuff is really good and there’s a lot of deception.’’

Talks in Boston The next round of collective bargaining talks between Major League Baseball and the Players Association will be at the Sheraton Boston today and tomorrow. The union has encouraged Red Sox players to attend. The CBA expires after the season but no drama is expected in coming to a new agreement . . . Righthander Bobby Jenks is scheduled to play catch today for the first time since going on the disabled list with biceps tendinitis May 5 . . . Infielder Marco Scutaro, out with a pulled rib cage muscle, skipped the road trip to receive therapy at his home in Florida. He will rejoin the team today . . . University of Kentucky basketball coach John Calipari visited with Francona before the game . . . Josh Beckett turned 31 yesterday. He celebrated quietly, hanging out with a few friends. “The next big one is probably 35,’’ he said.