What side of this argument are you on? 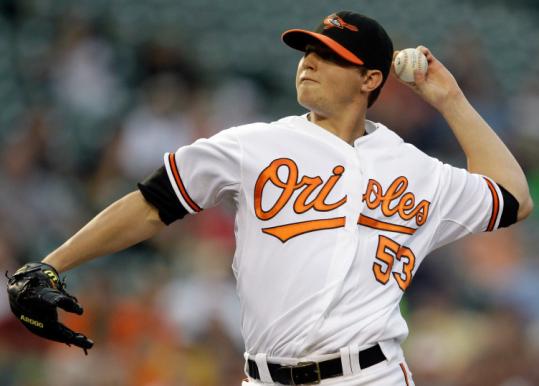 The Sox fell to 4-6 against lefthanders this season after rookie Zach Britton allowed five hits and one run in six innings. (Rob Carr/Getty Images)
By Nick Cafardo Globe Staff / April 27, 2011

BALTIMORE — When a lefty such as Baltimore’s Zach Britton or Oakland’s Brett Anderson has success against the Red Sox, it brings up the question many asked heading into the season — is the Sox lineup too lefthanded?

The Sox have substituted lefthanded hitters Carl Crawford and Adrian Gonzalez for the switch-hitting Victor Martinez and righthanded-hitting Adrian Beltre. Gonzalez hit lefties at a .337 clip last season in San Diego with a .937 OPS. Crawford didn’t fare as well against them, with a .256 average and a .696 OPS. Martinez raked against lefties, hitting .400 with a whopping 1.173 OPS. Beltre hit lefties at a .328 clip with eight homers and 27 RBIs and a .943 OPS. So there’s a dropoff in production vs. lefthanders.

Britton, who threw six innings of one-run ball in a 4-1 win last night, improving his record to 4-1, might not be the best example, since he entered the game far more effective against righthanders than lefthanders. But still, this could become an issue down the road. After last night, the Sox’ average against lefties dropped to .236.

The Sox have good hitters vs. lefthanders such as switch hitter Jed Lowrie, who went 0 for 3 against Britton hitting righthanded (maybe he should have hit lefthanded), but still is hitting .429 against them (12 for 28). Righthanded hitters Mike Cameron and Darnell McDonald always have hit lefties well, though Cameron currently is 2 for 16 against them and McDonald is 2 for 11.

The Sox are now 4-6 against lefthanded starters, which is not so out of whack with their season record of 10-12.

“I’m just trying to see the ball and hit it,’’ Ortiz said. “I didn’t know what I was doing against lefties, but I think it’s going better than it did last year at this time.’’

When asked if a team can be too lefthanded, he said, “I don’t think so. We have guys who can hit lefthanded pitching. I don’t think that’s a big deal.’’

“I suppose if you have six or seven guys who are lefthanded, I guess that would be an issue,’’ he said. “But we have, what, five guys in our lineup who are pure lefties, so that’s pretty good balance for me. When you’re hitting well as a team, that stuff doesn’t even come up.

“You go out there and you can hit anyone if you’re hot at the plate. I mean some years, like last year, I wasn’t so good against them, I guess, and I have no explanation why. This year when I face them I’m a lot better and I don’t know why.’’

Gonzalez, now 7 for 36 (.194) against lefties, said the topic was a non-issue. For someone who has hit lefties at his career clip, that’s true. Gonzalez came up against Britton with the bases loaded in the fifth and rolled a ground ball to second base for a force to end the inning. Gonzalez said lefty or righty, he doesn’t care.

“It has nothing to do with a new league or a lefty pitcher or my shoulder or anything like that,’’ he said. “I’m pulling off the ball, and when I stop doing that, I’m going to be able to stop rolling balls over and [start to] hit them to the opposite field like I’m supposed to. I haven’t been comfortable at the plate all year. That’s why I’m not drawing a lot of walks.’’

There are a few other Sox hitters not faring well against lefties. Crawford, who is not hitting anyone well, is 6 for 34 (.176) vs. lefties. Jarrod Saltalamacchia is 1 for 13, and Varitek 1 for 17, getting his first hit off one against Britton last night. Marco Scutaro is batting 3 for 14 (.214) against southpaws.

“We can match up Cam or Darnell McDonald against a tough lefty if we have to,’’ Gonzalez said. “I think we’re fine. I think we had much harder lefthanded throwers in the National League.’’

The team does indeed think it’s fine. After all, the feeling is that lefthanded hitters are well-suited in Fenway Park, so why not load up with lefty bats?

Scouts often mention the lefthandedness of the Sox, and the fact that effective righthanded swings from Jason Bay, Beltre, and Martinez are no longer part of the lineup.

It’s no secret that lefthanded pitchers love a lineup in which the prominent hitters are lefthanded. You don’t think Jon Lester loves facing lefthanded hitters? Of course he does.

And despite the fact that Britton so far had been more effective vs. righties, the Sox hitting from the left admitted that he was tough.

“He threw one pitch to me 96, so he’s got good velocity and good movement,’’ Drew said. “He throws that sinker. That kid is going to be really good in this league against anybody, but we do face a lot of good lefty pitchers and most of them are power guys with good velocity and they’re tough on lefthanders.’’

It’s too early to tell how good the Sox will be vs. lefthanders, but there’s reason to ask the question: Are the Red Sox too lefthanded?