After counseling, Varitek has life back together 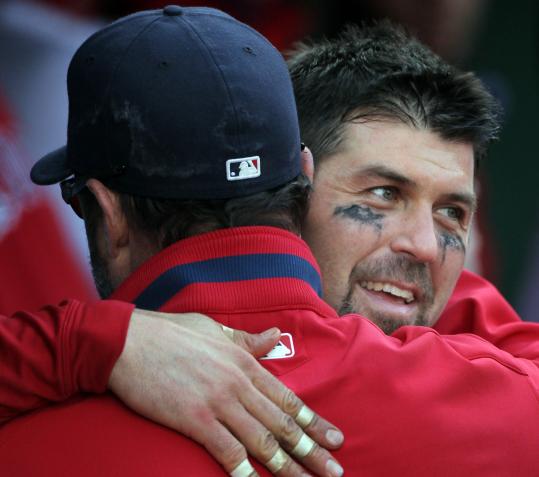 Jason Varitek’s final game with the Red Sox could have been last Oct. 3 (above), but when Victor Martinez left, the team signed Varitek within 24 hours. (File/Bill Greene/Globe Staff)
By Peter Abraham Globe Staff / April 26, 2011

Jason Varitek reached the height of his professional success in 2007. The Red Sox won their second World Series in four years and he was at the center of it all as the catcher and team captain.

Life was a series of champagne celebrations and adulation. But Varitek’s joy was tempered with the knowledge that his marriage of nearly 13 years was coming to an end.

“You could see it in his eyes that he wasn’t getting much sleep,’’ teammate Josh Beckett said. “Those were some rough days for him.’’

It was only the beginning of what Varitek now calls “a time of transition’’ in his personal and professional life. He filed for divorce 10 months after the Series, then lost his job as the everyday catcher midway through the 2009 season when the Red Sox traded for Victor Martinez.

In 2010, just as spring training was starting, Varitek learned that his father had lapsed into a coma and was near death. He rushed to Orlando and spent one agonizing afternoon searching for Joe Varitek’s living will.

“Doctor’s orders. My dad had put it somewhere and I spent hours trying to find it,’’ Varitek said. “It was probably the most difficult thing I’ve ever had to do.’’

His father pulled through. But Varitek’s career took another downturn when he broke his right foot last June, the injury leading to speculation that his tenure in Boston — if not his career — could be over.

At the same time, Varitek was learning the complicated process of being a single father, having gained split custody of his three daughters.

“Almost everything in his life changed,’’ said Jared Varitek, one of Jason’s three brothers. “When I look back on it now, I don’t know how he handled it. He had to be a multitasker to the extreme.’’

Sitting in the dugout hours before a recent game, Varitek readily admitted to needing help. He underwent “hundreds of hours’’ of counseling, learning more about himself and how the changes in his life had affected him.

For the first time, Varitek also discussed his readiness to try marriage again and the woman he recently asked to take that step.

After years of zealously guarding his privacy, one of Boston’s most respected athletes threw open a window to his personality.

“People see me as this robot; we’ll just leave him alone and let him do his job,’’ Varitek said. “There’s a whole different element to me that can communicate and I’ve learned how to do that. A lot has happened and there’s a different me coming out.’’

Winning her over Catherine Panagiotopoulos was not too impressed the first time she met Varitek. It was at a charity event hosted by Beckett last summer at the Lucky Strike Lanes across from Fenway Park.

For starters, he used a wingman.

“He had somebody approach me and say he wanted to meet me,’’ said Panagiotopoulos, 33. “The captain, this big baseball player. He was kind of dull.’’

They met again a few weeks later at Howl At The Moon, a piano bar in Boston. As Panagiotopoulos chatted with a group of friends, Varitek barged in and introduced himself again.

Panagiotopoulos, who grew up in Marion, knew Varitek only from what she heard in the media. “He had a reputation,’’ she said. “My first thought was to stay away.’’

But they started talking and exchanged phone numbers. Six weeks of calls and text messages followed, but she steadfastly refused his entreaties to try dating.

“I pursued it,’’ Varitek said. “We spent a lot of time getting to know each other as friends.’’

Panagiotopoulos agreed to give romance a try and quickly fell for Varitek, 39.

“What attracted me to him so much, to take steps closer to him, was that he opened up,’’ she said. “He was so adamant. He opened up his closet and said, ‘This is what is going on; this is what I have to do.’

“The man loves to talk, he loves to laugh. To me, he’s the most loving, trustworthy man I’ve ever met in my entire life.’’

Varitek proposed to Panagiotopoulos earlier this month at a surprise birthday party she planned for him. They have not yet set a date.

“He’s found somebody he enjoys being around,’’ said Beckett. “You can see they’re really good friends.’’

Panagiotopoulos has “embraced all aspects’’ of their relationship.

“It takes a strong person, you have to have a tough skin and let things roll off your shoulders,’’ she said. “He’s not just a normal guy. Everybody in Boston knows him. But the person I know is so down to earth.’’

Varitek married his ex-wife, Karen, when he was 23 and just out of Georgia Tech. Their breakup was difficult and he still has regrets.

“It’s hard to talk about these things personally. But I can always be really appreciative because she’s been a wonderful mom to our kids and has done a great job with them. We’ll forever have to be a part of each other’s lives in raising these kids.’’

Now, with Panagiotopoulos, Varitek is ready to try again.

“She’s been such a huge support not only for me and for my girls, for my life and who I am as a person and allowed me to be the person that I am. It’s been great,’’ he said.

‘I’m just their dad’ You remember Varitek punching Alex Rodriguez in the face, instigating a memorable brawl with the Yankees in 2004. Or watching him block the plate with apparent disregard for his own safety.

What you don’t know is how quickly he can put hair into a ponytail. Or that Belle is his favorite princess. That’s what comes with being a father to three girls. Alexandra is 11, Kendall 9, and Caroline 5.

“I love to take off the catcher’s mask and put on my girl hat,’’ Varitek said. “It makes going home that much easier because I’m not always a catcher to them. I’m just their dad.’’

Varitek and his ex-wife live a few miles away from each other in the Atlanta suburb of Suwanee. The girls spend most of their time there, and parts of the summer in Boston.

“It’s a totally different world when they’re around,’’ Varitek said. “Along with my fiancee, they’re my life.’’

Varitek’s trainer and personal assistant, Leslie Eddins, says the tough-guy catcher is happiest when his house is full of kids.

“Jason loves to have his girls and all their friends over. They take it over,’’ Eddins said. “He’s Super Dad.’’

Said Panagiotopoulos: “He has a routine just like he does with baseball. Up at 6 a.m., getting his coffee ready, making their lunches, backpacks packed, clothes are out.’’

Varitek talked to his daughters before he proposed to Panagiotopoulos. Their approval had to come first.

“It’s a huge responsibility for me and a huge part even for her,’’ he said. “She’s taken the bull by the horns with them. My kids couldn’t have been happier than when I told them what was going to transpire and called them after. She’s going to be in their life always.’’

After so many years in the male-dominated world of baseball, Varitek leads a different life away from the field.

“I’m surrounded by females,’’ he said with a laugh. “Three girls, my fiancee, and even two girl dogs.’’

All about the team Varitek has been a major leaguer for parts of 15 seasons, all of them with the Red Sox. Only three players — Hall of Famers Ted Williams, Carl Yastrzemski, and Jim Rice — have spent more time with the team without playing for another franchise.

“Being on that team, being the captain, that’s part of my personality,’’ he said. “It’s in my blood.’’

Varitek has caught a team-record 1,430 games. Four of those were no-hitters, a major league record. He also has represented the team in countless charity endeavors around Boston.

“He cares about us as an organization, how we’re perceived,’’ manager Terry Francona said. “It means something to him that we play the game the right way. You’d like to think everybody feels that way. But some people are special. He’s special.’’

Varitek received a standing ovation from the Fenway Park crowd last Oct. 3 when he was taken out of the game in the ninth inning. It was a tribute and a possible farewell.

Jared was in the stands applauding his brother, as were Catherine and his daughters.

“There were tears in my eyes,’’ Jared said. “The girls were asking me why I was crying. Then next thing you know they were crying, too.’’

After the game, in the Red Sox family room adjacent to the clubhouse, Varitek tried to get his brother to lighten the mood.

“He’s the guy who makes everybody laugh and he can’t say a word,’’ Varitek said. “Everybody was upset. That’s when I realized this was their home as much as mine. My girls have grown up here.’’

When Martinez signed with the Tigers, the Red Sox made a deal to bring Varitek back within 24 hours. He reported to spring training looking more like a linebacker, not an aging catcher.

“He can play another two or three years,’’ Eddins said. “Nobody knows better than I do how hard he has worked.’’

Varitek has embraced a backup role, working closely with the pitchers and tutoring first-stringer Jarrod Saltalamacchia.

“He has put his pride aside,’’ Panagiotopoulos said. “He never wants to play anywhere else and I don’t think he will. He lives, eats, breathes, and sleeps the Red Sox.’’

The changes in his personal life and the lessons learned in therapy have helped Varitek adjust to his new role.

“My first reaction to things is I’m quiet,’’ he said. “But now I’m able to joke around, make some guys laugh in the clubhouse, make them laugh in the dugout, but yet still can take my job seriously.

“I’ve learned how to communicate a lot better. You tend to enjoy things a little better now. I’ve had players I’ve played with enjoy it. I’ve tried to enjoy it, but it just didn’t always look like it was on my face because of responsibility and things that you have to carry. It’s been a fun transition.’’

The players have noticed the changes. Varitek, more than ever, commands their respect.

“Whenever you have tough times in your life, you come out one way or another,’’ Beckett said. “You either learn a lot or you feel sorry for yourself. He’s never been the kind of guy who feels sorry for himself.’’

Striking a balance Joe Varitek is driving again and soon may see his son play in person, perhaps in June when the Sox play the Rays in St. Petersburg. Their father’s illness brought the brothers even closer.

Alexandra, Kendall, and Caroline play for their own sports teams now. “I try and stay quiet and just watch,’’ Varitek said.

The Red Sox have won eight of their last nine games after a rough start and the team is 6-2 when Varitek starts.

“It starts with Catherine,’’ he said. “She sees my heart and has my back and she supports the other love of my life — my girls. I’ve always loved the game. But now I have a great balance. I’m at a very good place.’’