Ortiz gets his timing right 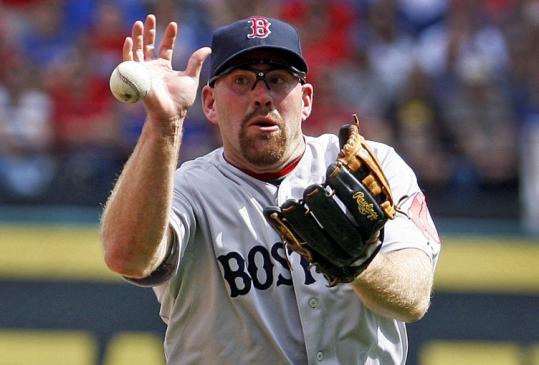 After getting a handle on this first-inning grounder, Kevin Youkilis was tagged with an error for a poor throw to first. (Jim Davis/Globe Staff)
By Peter Abraham Globe Staff / April 2, 2011

ARLINGTON, Texas — David Ortiz did not hit his first home run last season until April 23. In 2009, it did not come until May 20. But this year it took only four at-bats.

Ortiz blasted a fastball from Darren Oliver over the fence in left-center in the eighth inning yesterday. It briefly tied the game before the Rangers emerged with a 9-5 victory.

If you’re looking for a good sign on a bad day, that Ortiz connected early may be the best one.

“Hopefully,’’ Ortiz said, when asked if the home run was a good sign that he would avoid another slow start. “I’ll just keep my mouth shut and keep on working. This is not an easy game to play. Pitchers make pitches and hitters take their swings. You have your approach and you have to come to the game ready to do some damage.’’

Ortiz asked for extra playing time in spring training and ended up with 60 at-bats over 22 games. It paid off against Oliver, against whom he was 2 for 14 with six strikeouts.

“That was a nice swing, a really nice swing,’’ manager Terry Francona said. “He stayed back and he used his legs. That was pretty.’’

Mr. Popularity John Lackey, who will start tonight’s game for the Sox, grew up about three hours west of Arlington in Abilene. He also played one season at the University of Texas at Arlington, a 10-minute drive from Rangers Ballpark.

Lackey has been swamped with ticket requests from family and friends.

Lackey spends most of his offseason in California but still catches Cowboys games when he can. He is 11-12 with a 5.74 ERA in 33 career starts against Texas, 6-5, 6.11 in 16 starts at Rangers Ballpark.

“They’re a tough team and they’ve always had a good lineup,’’ Lackey said. “Those guys know me pretty well and I know them.’’

Lackey pitched well in his one start against Texas last season, allowing two runs over seven innings in a 3-2 Red Sox victory.

Tonight will be the seventh time in his 10 seasons that Lackey’s season debut comes against the Rangers.

Go speed racer Adrian Gonzalez stole the second base of his career when he nabbed second without a throw in the third inning.

Gonzalez said the day he arrived at camp in February that he was one of the slowest players in baseball and running the bases was not a big part of his game. But with two outs and Ortiz at the plate, he took off.

No pressure It is rare to find a baseball pundit who has not picked the Red Sox to win the American League East, if not also the AL pennant. But Francona doesn’t view that as any extra pressure.

“People like to talk about it. I don’t see any harm in that. It’s not going to help us win games or lose games. To be honest with you, the expectations in our clubhouse are high and they should be. That’s what’s important to us.’’

But Texas slugger Josh Hamilton does seem to pay attention to the prognostications.

“You don’t hear anyone talking about the defending AL champs — at all,’’ he said. “So it just adds fuel to the fire. We know Boston has a good team. We know they’ve added some good players to their lineup, but we feel like we’re just as strong, if not better than we were last year. So, game on.’’

Welcome aboard Relief pitchers Matt Albers, Dennys Reyes, and Dan Wheeler made their debuts with the Sox. Albers pitched a scoreless inning in relief of Jon Lester, walking one. Reyes came in to face the lefthanded-hitting Hamilton in the seventh inning and walked him on four pitches. Wheeler followed and got two outs to end the inning.

Facing the iron The Red Sox have faced the defending AL champions on three consecutive Opening Days — the Rays in 2009, the Yankees in 2010, and the Rangers this season. But it’s no conspiracy as the schedule is done before the playoffs start.

“We just go where they tell us,’’ Francona said. “It really doesn’t matter. You better stack up against everybody. It’s too long of a season. We just need to play who we play and play better than they do.’’

Weather or not It was 90 degrees at first pitch and it is expected to be in the mid-80s today and tomorrow. But when the Sox open a three-game series in Cleveland on Tuesday, temperatures are forecast to be in the 40s with a chance of snow. “I saw where they’re making snow angels there,’’ Francona said . . . The Sox are 55-55-1 on Opening Day . . . Lester was the first lefthander to start on Opening Day for the Red Sox since David Wells in 2005 and only the second since Bruce Hurst in 1984 . . . The Sox sent righthander Pedro Perez, who spent last season with Single A Greenville, to Detroit to complete the November trade for Triple A infielder Brent Dlugach.