Lowrie’s ready for a healthy season

Over his wrist injury and long illness, Lowrie’s ready for a healthy season and the chance to play up to his high potential 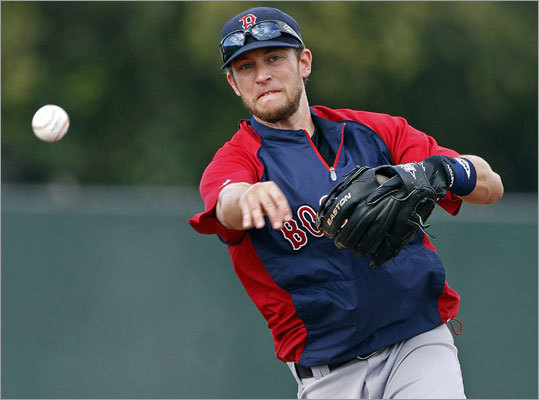 (Jim Davis/Globe Staff) Jed Lowrie is healthy, having recovered from a wrist injury and mononucleosis, and eager for a chance to prove his worth to the Red Sox.
By Amalie Benjamin Globe Staff / March 27, 2011

FORT MYERS, Fla. — The loop is a small one: A left on West 1st Street, a couple of miles down Martin Luther King Boulevard, a left off of Jacksonville, and another past the autograph seekers at the corner of Edison. He returns down Edison, past the ballpark where the Red Sox are playing the Marlins, takes a right at Anita’s Used Furniture, drives past the Publix, and back to the apartment complex.

It takes 10 minutes, maybe 15, each way. And it is as Jed Lowrie promised. He had warned, earlier, that the ride — a tour of his daily commute for the five-plus months he was trapped in Fort Myers by mononucleosis last summer — will be “boring.’’ It is.

So was his summer.

He steps on the gas, guiding the sleek, black Infiniti M out of the driveway. He makes a left.

“It’s easy to wonder where I would have been if all of this wouldn’t have happened,’’ Lowrie said. “Even if I were to look at where I was two, three years ago — winning the starting job and seeing where I could have been — I know that I’m going to get to that point where I should be.

“All I can do is prepare myself every day to be the player that I’m going to be the next day or the next year.’’

The fatigue has melted away and Lowrie once again looks healthy, athletic. There are no more injuries — not since the second half of last summer, when he finally recovered from a left wrist injury that required surgery in 2009 and a bout of mononucleosis that lasted half of 2010.

He hasn’t been healthy, really healthy, since May 2008, when he initially injured the wrist with Pawtucket before making his major league debut. It has worn on him; the injuries, the constant rehabilitation, the inability to prove his worth with the Sox.

And yet, at least outwardly, his attitude is upbeat, his focus steady. In a rare moment of candor, he admits that the mono “really got to me,’’ allowing that it was harder to deal with emotionally than physically.

“The way I look at it, it was just a string of bad luck,’’ Lowrie said. “You could say bad things come in threes: I broke my wrist, had surgery, and got mono. There you go.’’

As he pulls into the player development complex, Lowrie points to a spot. It’s the one up front, next to the opening in the fence to the clubhouse and fields, the prime position in a lot that is over capacity during spring training, leaving tardy parkers to find grass spaces. That was where he parked last summer.

Only the Dominican kids and the high schoolers populate the facility past March.

“I was actually getting hassled the first couple days by the security guards over there ’cause they were trying to figure out why someone was coming into the clubhouse after stretch,’’ Lowrie said. “All the players should be out on the field.’’

He would show up, just to show his face, mustering all of his limited energy. On a good day, he would walk on the treadmill at 2 miles per hour for five minutes. That was all he could manage. That brief burst would put him back on the couch for the rest of the afternoon.

That earned him a nickname from his roommate, Michael Bowden: “Old Man Jed.’’

As he got better, as he went through the roller coaster of recovery — a good day here, a bad day there — he was so bored that he bought an indoor putting mat and eventually turned to completing school work, the little that was left toward earning his degree at Stanford.

Outside, especially in sunlight, he couldn’t do much. Three weeks of bed rest led to short sessions hitting off a tee, as he worked with minor league trainer Brad Pearson. “That was a whole day’s work,’’ Lowrie said. “Just literally warming up, getting stretched, hitting off a tee for 10 minutes and that was it.’’

It was different than it had been with his wrist. There were more worries. He had played through the wrist issue, finishing out 2008, resting in the offseason, tearing up spring training, before not making it through the first road trip. He had surgery. He rehabbed. He made it through the end of the season, then started feeling sick, finally culminating in a hospital trip in Port St. Lucie, Fla., during spring training in 2010.

He couldn’t catch his breath. His heart was racing. He had mono.

“It was, ‘Who cares about baseball?’ ’’ Lowrie said. “I’m really sick right now. I feel like crap. I could care less if I ever play a game of baseball again in my life. The point is that right now I’m focused on me getting healthy because that’s what matters. I’m not worried about [baseball]. I’m worried about me getting healthy so I can be a normal adult and have a family and raise kids and do the things that I want to do in my life.’’

Not that he stopped thinking about the game. It was hard to avoid, as he faced the reality of being labeled brittle and injury-prone, as he saw what he had worked for morph into hours and days on the couch, unable to do much of anything.

“I think Jed initially put a lot of pressure on himself to get back to play as fast as possible,’’ Pearson wrote in an e-mail. “He felt bad about being sick and thought he might be letting his teammates down. I just reminded him that it was not his fault that he got sick and when the time came that he was healthy again, baseball would be waiting for him.’’

Lowrie points out the window, as the car glides by the Publix supermarket. He couldn’t stomach daytime television and turned to iTunes, to shows such as “Royal Pains’’ and “Castle’’ and “Family Guy.’’ He turned, too, to the Food Network. One of the few places he stopped in Fort Myers was this Publix, blocks from his apartment.

“One thing that I did a lot of while I was there is I did a lot of cooking,’’ Lowrie said. “I cooked a lot for myself. That’s how I controlled the food that I was eating, trying to make my food as healthy as I could just to give my body a chance to fight this virus off.’’

Lowrie’s mother had taught him and his friends to cook. “By no means am I a gourmet chef, but I can certainly make a worthwhile meal,’’ he said.

“It’s almost more important how they respond to it than the fact that they actually got hurt,’’ general manager Theo Epstein said. “Players can take a ‘woe is me’ approach and feel as if they’re snakebit, they’re never getting a break, someone’s always out to get them. Then the injuries impede their career more than just physically and it almost becomes a mental block.’’

And it doesn’t go away easily. It lingers, often taking trips through multiple organizations to get past it. Lowrie, Epstein said, seems to be putting himself in a better position, making himself stronger, returning to the favor of an organization that once had significant plans for him.

Those changed, inside and outside of the franchise, through his injury-plagued last three seasons.

“People were questioning whether he was a guy we could get on the field and how much impact he would have when he was on the field,’’ Epstein said. “Those questions were really unfair because they were a result of him trying to play through the injuries. In some circles I think there were some doubts about him, and that’s an uncomfortable position for the player to be in.’’

Asked about doubts within the Sox, Epstein said, “I think any time a player is hurt for an extended period of time, evaluations can be impacted by that, especially with incomplete information. It’s hard to sit there if you’re a scout and stand by him, put your name on him. I think there are a lot of people in this organization who did believe, who have believed in him consistently and have stood by him.’’

Epstein had, at one point, publicly said that Lowrie would have to demonstrate he could stay on the field for the Sox to rely on him. That was part of why the Sox signed Marco Scutaro, part of why Lowrie — who still isn’t arbitration eligible — is coming into this season as a utility infielder. Which is not to say he won’t become a starter eventually. He just isn’t there yet.

He handles this, mostly. He knows the fluky nature of his injuries, the bad luck involved. He wishes things were different. He knows it’s too late for that.

Lowrie makes a left back into the parking lot, stops in front of the door to the building. He drops off his passenger, and the Infiniti pulls away. The text arrives a few minutes later: “Just to be clear I’m not asking for pity,’’ Lowrie writes. “It was a terrible experience, but I feel healthy now and that’s all I care about.’’