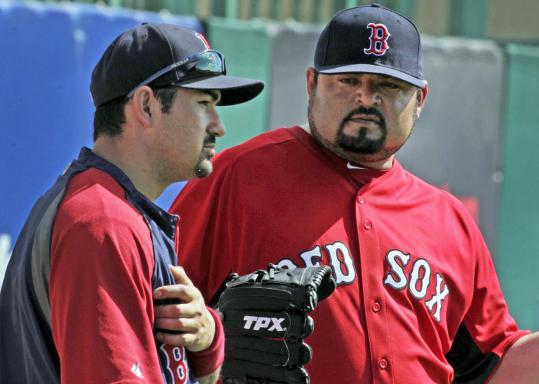 FORT MYERS, Fla. — Dennys Reyes signed a major league contract with the Red Sox yesterday and was added to the 40-man roster. But manager Terry Francona was not yet ready to say the lefthanded reliever had made the team.

“The season hasn’t started yet,’’ said Francona. “We still have some guys in camp and he’s one of them. We still have decisions to make.

“But everybody likes the movement [of his pitches], his track record, his ability to compete, and that’s kind of what we told him.’’

Reyes, 33, has been in the majors for parts of 15 seasons with nine teams. He has made 40 starts in his career but has been a one-batter specialist in recent years.

While the Sox would not commit to Reyes being on the team, his agreeing to a contract and forgoing the opportunity to declare free agency had to have come with some assurances. Reyes is in line to make $900,000 with an additional $500,000 available through incentive clauses.

Reyes is eager to play for a contender, having tasted the postseason with the Twins in 2006 and the Cardinals in 2009.

“It means everything,’’ he said. “That’s what I’m here for. I’ve had the opportunity to play for contending teams the last few years of my career.

“It’s really fun to go into September and play for something.’’

With Reyes likely on the roster, the Red Sox are left with Alfredo Aceves, Matt Albers, and Hideki Okajima competing for one slot in the bullpen. With Aceves and Okajima having minor league options remaining, Albers, a righthander, could be the choice.

“I don’t think it’s a pitch-off,’’ said Francona. “It’s more of us trying to determine where we best set up. Not only for now but for down the road and how to go about that.’’

Okajima has been with the Sox for four seasons. A key member of the 2007 world champions and an All-Star that season, his effectiveness has waned in recent years along with the velocity of his fastball. The Sox released Okajima in December, then signed him to a $1.75 million deal a month later.

“When he pitches like he can, he’s terrific,’’ said Francona. “He doesn’t have a lot of margin for error because his velocity is what it is.

“But he manages the running game. The game never speeds up on him.’’

The Sox plan to make their final decisions before leaving Florida Tuesday.

Cup conclusion
Daisuke Matsuzaka allowed one run over six innings but the Sox allowed eight runs in the final two innings and fell, 9-8, to the Twins at City of Palms Park. It was their ninth consecutive loss. Minnesota won the spring series, 3-2, to break Boston’s four-year hold on the Fort Myers Mayor’s Cup.

Matsuzaka has given up three earned runs on 10 hits in his last 16 2/3 innings.

“It’s good to be able to show the results to the manager and the pitching coach to make them have confidence in me,’’ he said through an interpreter.

Minnesota’s reserves scored two runs in the eighth off Dan Wheeler and six in the ninth off Bobby Jenks. Four of the runs off Jenks were unearned, but he allowed five hits and a walk.

Sox pitchers have allowed 78 runs in the losing streak.

Adrian Gonzalez hit his first home run of the spring, an opposite-field shot to left in the third. Darnell McDonald added a three-run triple.

Reliever relieved
Daniel Bard was relieved to hear that the fastball he hit Blue Jays outfielder Corey Patterson in the head with Friday night did not cause a concussion.

Bard lost control of a 96-m.p.h. fastball in the eighth inning and it struck Patterson on the back of the helmet. Patterson was down for several minutes before being helped off the field.

Before the game was over, Bard called the visitors clubhouse to check on Patterson, who said he felt all right. A CT scan taken later that night showed no damage.

“I surprisingly feel OK under the circumstances, so we’re just going to monitor it as a day-to-day thing,’’ Patterson told reporters at Blue Jays camp.

Tazawa goes on DL
To make room for Reyes on the 40-man roster, the Sox placed righthander Junichi Tazawa on the 60-day disabled list. He is recovering from Tommy John elbow surgery performed last April 6 . . . The Sox will bring catcher Dan Butler, righthander Blake Maxwell, righthander Jason Rice, and infielders Nate Spears and Drew Sutton as extra players for the game in Houston Wednesday . . . Outfielder Josh Reddick, who has been nursing a pain in his side, was optioned to Pawtucket after the game . . . Third base coach Tim Bogar was away from the team for a second day, attending to a family matter. First base coach Ron Johnson coached third with Lynn, Mass., native Duncan Webb coaching first. Webb is the organization’s player development programs coordinator.