Triple A at-bats help with timing 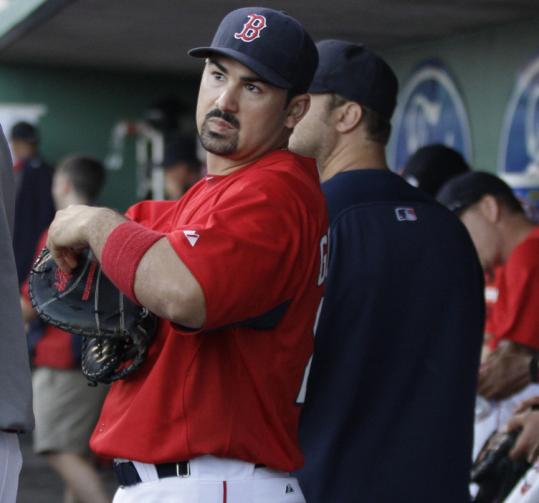 Coming off shoulder surgery, new first baseman Adrian Gonzalez got a late start in spring training, but he is catching up. (Charles Krupa/Associated Press)
By Peter Abraham Globe Staff / March 24, 2011

FORT MYERS, Fla. — Adrian Gonzalez is not worried about his surgically repaired right shoulder. Those concerns have been left in the hands of his doctors and the Red Sox athletic trainers.

But his swing was still a bit rusty, and that was something only he could fix.

That is why Gonzalez suited up for Pawtucket yesterday, eschewing a day off to get six at-bats at the player development complex.

With general manager Theo Epstein and manager Terry Francona standing watch behind the backstop, Gonzalez went 3 for 6 with an RBI against the Durham Bulls, a Tampa Bay affiliate. To expedite the process, he was allowed to bat third in every inning.

To guard against reinjuring his shoulder, Gonzalez did not play in a game until March 12 and had appeared in only five games since, getting a total of 14 plate appearances. Yesterday was a chance to catch up a little while the rest of the Red Sox spent a day away from baseball.

“It hasn’t gone too well. It was good to be able to go out there and try and have some at-bats and kind of mix it up, be aggressive and all that. It felt good.

“It makes me feel a lot more comfortable, getting that timing down and just get a little more repetition so you can start playing better.’’

Facing righthanders Richard De Los Santos and Jeremy Hall, Gonzalez grounded out twice, had three singles, and flied to center. In all, he saw 24 pitches and his swing appeared to become more fluid with each at-bat.

“I’ve been seeing the ball great as far as seeing it out of the hand, seeing it ball-strike,’’ he said. “But when it comes to seeing a pitch when I’m swinging, it wasn’t clicking.

“The results really don’t matter in spring training. It’s being able to see a strike and take a good swing at a strike with the right timing and all of that stuff. It hasn’t been there quite, but today I felt a lot better.’’

The Sox have seven exhibition games remaining before Opening Day. The plan is for Gonzalez to play in five of them. He will skip today’s game in Jupiter against Florida and Sunday’s game in Sarasota against Baltimore.

That would get him another 15 or so plate appearances before stepping in against Rangers lefthander C.J. Wilson April 1 in Arlington, Texas.

“I should be fine,’’ Gonzalez said.

Gonzalez is looking forward to being at the center of what should be a potent lineup. Based on how Francona has used him in spring training, Gonzalez will hit third or fourth.

“The potential is unbelievable,’’ said Gonzalez. “You have a very strong 1 through 9, and guys that are going to be platooning are still guys who would start on most teams.

“It’s great to be in a lineup like that because you know you’re going to have days when you hit six times and that can only be good for you.’’

Who knew Orioles manager Buck Showalter had it out for Epstein? In the April edition of Men’s Journal magazine, Showalter had some unusually candid and cutting comments. “I’d like to see how smart Theo Epstein is with the Tampa Bay payroll,’’ said Showalter. “You got Carl Crawford ’cause you paid more than anyone else, and that’s what makes you smarter? That’s why I like whipping their butt. It’s great, knowing those guys with the $205 million payroll are saying, ‘How the hell are they beating us?’ ’’ Epstein declined to comment . . . According to Forbes magazine, the Red Sox are worth $912 million, second in baseball to the Yankees at $1.7 billion . . . Clay Buchholz will face the Marlins today, with Jonathan Papelbon, Daniel Bard, Hideki Okajima, and Tim Wakefield tentatively scheduled for minor league games in Fort Myers.