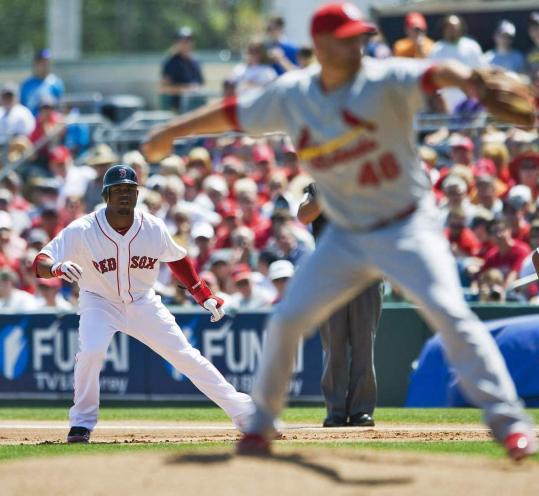 FORT MYERS, Fla. — As baseball teams became more sophisticated in their ability to analyze statistics and trends, stolen bases fell out favor in some organizations. The risk of making an out outweighed the advantage gained by advancing 90 feet.

But for every carefully studied nuance of the game, there are outliers, those players whose talent can flip the numbers in their favor. In Carl Crawford and Jacoby Ellsbury, the Red Sox have two such players.

Crawford has been successful on 82 percent of his career steal attempts, Ellsbury on 85 percent. In the last eight years, Crawford has led the American League in steals four times and Ellsbury twice.

Now they will be together in the same lineup, with Ellsbury leading off and Crawford likely hitting third.

“What are possibilities? To me the sky is the limit,’’ Crawford said yesterday. “Can we both get 50?’’

Marquis Grissom had 76 steals and Delino DeShields 56 for the 1991 Montreal Expos. No team since has had two players with 50. In Red Sox history, you have to go back to 1910 and Harry Hooper and Tris Speaker to find two players who had 35 steals in the same season.

Last year, when Ellsbury played only 18 games because of injuries, part-time outfielder Ryan Kalish led the Sox with 10. Now manager Terry Francona has a lineup with speed and power.

“It’s common sense, you take your strengths and you try and make the most out of them,’’ he said. “I think every team would like to run because it’s fun. It’s fun to be aggressive. It’s fun to have guys like that.’’

With hitters such as Adrian Gonzalez, Kevin Youkilis, and David Ortiz behind the two sprinters, smart decision-making will be needed, otherwise RBI opportunities will be lost.

“There’s time we know you’re gambling,’’ Francona said. “But the percentage is really important. That’s more important than the number [of steals] for me. What we care about is not making outs.’’

Crawford learned that lesson during his nine seasons with the Tampa Bay Rays. As the team improved, he grew more judicious about when he took off.

Before the season starts, Crawford plans to speak with the hitters behind him in the order, particularly Gonzalez, to get a sense of their approach at the plate and how he can assist.

“A lefty hitter, for instance, might want you to stay to keep the hole open. But for the most part guys want you to get to second base,’’ he said. “I’ll ask a lot of questions. Whether they want me to go, to stay, how many pitches they like to see. You get to know each other and what each other likes to do. I want to get a feel for what makes the hitter comfortable.’’

Francona expects the communication to be constant.

“That’s the best thing,’’ he said. “If you’ve got a guy on second and it’s bugging the hitter, then they need to be still. That’s their responsibility to know each other.’’

Said Ellsbury: “If you steal at a pretty good rate, it’s never an issue. I’ve had a good percentage over the years.’’

The expected No. 2 hitter in the lineup, Dustin Pedroia, has been told not to change his approach to make it easier for Ellsbury to run. The last thing the Red Sox want is their All-Star second baseman to have the bat on his shoulder.

“He’s right smack in the middle of those guys. I don’t want him to just sit there and take pitches,’’ Francona said. “If Pedey’s a little bit aggressive when they’re running and Jacoby steals 65 instead of 70, that’s OK.’’

Crawford and Ellsbury also will affect the game with their speed without actually running. Just the threat that they could go can cause the defense to shift or the pitcher to hurry through his delivery.

The Red Sox were forced to change their approach to holding runners last year, in part because of the havoc Crawford was causing.

“What a weapon to have a guy who’s fast,’’ Francona said. “You have a hole open and you have a good hitter up. That’s a nice combination. You have to defend them.’’

Ellsbury has watched from center field as Crawford disrupted games.

“When you’re playing defense and there’s somebody who can run, it puts pressure on the defense,’’ Ellsbury said. “You don’t normally see teams with two guys like that. It’s more the defense has to worry about. That’s what causes people to make mistakes, maybe trying to do something they’re not used to doing.

“I think it’s going to be fun. Hopefully we’re running a lot and scoring a bunch of runs. That’s the whole idea.’’