Out of spotlight, Yastrzemski stays in game his way 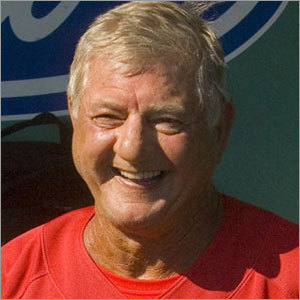 FORT MYERS, Fla. — He is the lion in winter, wheeling into the shabby minor league complex at the dead end of Edison Road every morning before 8. Fifty years after his rookie season, the greatest living Red Sox player doesn’t want to be around the millionaire big leaguers and he doesn’t want to be around baby boomer fans he thrilled all those years ago. He just wants to work with anonymous young hitters, walk around the warning track by himself for an hour, then retreat to an afternoon of fishing or golf.

Carl Yastrzemski is our New England sports Salinger. Ava Gardner. Sandy Koufax. He just wants to be left alone. He knows you love him and you appreciate those glory days, but truthfully, it probably means more to you than it means to him.

“I’m not much of a conversationalist,’’ says the 71-year-old legend. “I don’t like to reminisce about when I played. I had my day in the sun and it’s over with.’’

He is Boston baseball’s nowhere man. New England dads and moms tell their kids and grandkids about MVP Yaz and the Cardiac Kids of 1967. They remember the Triple Crown, loaves of Big Yaz Bread, and the best-selling album, “The Impossible Dream,’’ with its hit single by Jess Cain.

Yaz? He recoils from this. Remember the James Earl Jones character (fictitious author Terence Mann) in “Field of Dreams’’? Kevin Costner tries to invade the privacy of the “voice of a generation,’’ and when Jones realizes that the young man is there to talk to him about the old days, he screams, “Oh my God, you’re from the ’60s!’’ then sprays Costner with pesticide.

That’s Yaz when 55-year-old fans start talking about that final weekend series against the Twins in ’67.

“I find that everyone remembers more about it than I do,’’ says Yaz. “I just never think about having played baseball. I was very fortunate, very gifted. I think once I retired, I kind of said, ‘That’s it, there’s another life out there.’ ’’

He lives that life far from the cameras and the fans. Back home north of Boston, he takes long walks, plays golf, works out at a gym, fishes for stripers every day, and has dinner with his wife.

Where does he fish? It’s a secret. When Pulitzer Prize-winning photojournalist Stan Grossfeld went out on a boat with Yaz in 2005, Grossfeld was instructed not to reveal Yaz’s fishing spot.

Still, Yaz rejects the notion that he is a recluse.

“No, a recluse stays at home,’’ he insists. “I’m never home. I’m either out fishing or playing golf. I leave at 8 o’clock in the morning and I don’t come home till 4.’’

Fenway Park is not a destination. The Sox have made a cottage industry out of bringing back old-timers to watch games from the “Legends Suite.’’ Ex-players sign autographs, glad-hand fans, and tell stories of the glory days.

Yaz would rather spend a night in the hole at Shawshank.

He doesn’t do many interviews. He doesn’t pose for pictures. He has turned down six-figure book deals. When a company wanted him to shoot a dental commercial last year — $50,000 for a couple of hours in Boston — Yaz declined. Doesn’t want it. Doesn’t need it.

“I say no to everything,’’ he acknowledges.

He made an exception when Jim Rice was inducted into the Hall of Fame in 2009, but managed to get in and out of Cooperstown, N.Y., with virtually no human interaction. Yaz could be seen on stage with the other Hall of Famers when Rice delivered his speech, but by the time Rice sat down — before Rickey Henderson started his speech — Yaz was gone. Red taillights flanking a Massachusetts license plate, rushing away from those who worship him.

He comes to Fenway once a summer to raise money for the Genesis Fund. He came back to throw out the first pitch of the first game of the World Series in 2004 and ’07. Both times, he was gone by the third inning.

If the Sox need him to sign baseballs for the Jimmy Fund, they know the drill: send somebody up to Yaz’s favorite North Shore butcher shop, leave the balls behind, come back in a week, and the balls will be signed.

Yaz goes to Florida every spring, but he doesn’t like being around the big league camp where there are fans, demands, and egos. He prefers the quiet, dilapidated complex where wide-eyed players have yet to taste fame.

“I love being here at the minor league camp,’’ he says. “Working with these youngsters keeps you young. I get all wrapped up in it. You love to see kids progress from one year to the next year, and to see them go to the big club is a great thing, a great feeling.’’

Do any of them know that this white-haired man is the last major leaguer to win the Triple Crown?

“They weren’t even born when I played,’’ he says with a laugh (Yaz retired in 1983). “But they know. They might look it up before they get here.

“They wouldn’t be here if they weren’t a prospect. Now it’s all mental. Who’s the toughest mentally and making the adjustments. It seems every year these kids get bigger and bigger, and stronger and stronger. They are 18, 19 years old and they’re all 6-3, 210 pounds. Unbelievable. The Red Sox spend a lot of money with their players in the farm system.’’

He instructs the stars before they are stars, then lets them go.

“I worked with [Kevin] Youkilis. He paid his dues here. All of a sudden it just rang a bell with him and it came real fast. Our second baseman [Dustin Pedroia] wasn’t here that long. He had that tremendous desire. You could see he had something extra, something special. Tough kid even when he was here. I really noticed him in the intrasquad games. He was very disciplined in batting practice.

“You knew he was going to be something special. Very strong. Quick hands. I remember talking to him after he came up in the last month of ’06 the next year at spring training. That wasn’t him. He was pulling everything foul. Where down here it was right-center, left-center.

“They’re all bigger than me. My first year with the Red Sox, I weighed 175 pounds.’’

He doesn’t notice if Albert Pujols or anyone else goes into a summer threatening to win a Triple Crown. He has eyes only for the Red Sox.

“I watch them on TV every single day,’’ he says. “I don’t miss a game. I love watching it on TV. I love the camera angles, watching a pitch, how they set up the hitter, stuff like that.’’

His wife knows how to rig the home computer so he can track his grandson’s college games. Mike Yastrzemski was drafted in the 36th round by the Sox in 2009 and is an outfielder at Vanderbilt.

“He’s a hard worker,’’ says granddad. “He has ability. I just try to teach him to stay nice and relaxed and soft. Too many people want to grind it out and grip the bat and that slows the bat down. The more relaxed you are, the quicker the bat.’’

Yaz is down 30 pounds since his triple-bypass surgery in the summer of 2008.

“It was a wakeup call,’’ he acknowledges. “I’m in much better shape now. I’m staying right at 201, 202, where as before I was a little heavy. Sometimes you think you’re invincible.’’

As he speaks of his own immortality, he is presented with a Sports Illustrated cover from 1967. He looks at his young self, in full swing, hitting a line drive against the Cleveland Indians. He has no doubt signed this cover several thousand times.

“Every time I sign this picture, I can’t believe how many years Tony C’s been gone,’’ he says, pointing to the blurry image of Tony Conigliaro in the background. “That’s Tony in the on-deck circle. This picture was taken about a week before he got hit.

“He had that great swing. In ’67, he was just coming into his own. Defensively, throwing, catching, running. He would have been something. He loved the high pitch and he got on top of the high fastball.’’

It is a moment of sweet reminiscence, a rare moment for the greatest living Red Sox player.

Quickly, he shifts back into the present.

“I love this team we have this year,’’ he says. “I think Theo [Epstein] did a great job putting this team together. I just hope they don’t get hit with the injuries like last year. I might have to get my arm loosened up for the World Series.’’