This one was a night for sore eyes 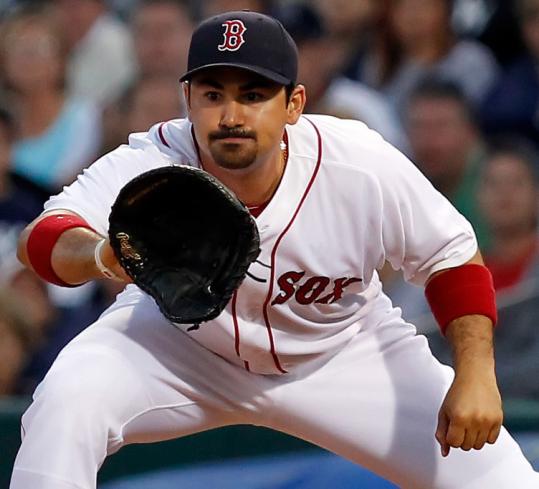 Though it was an exhibition, the Red Sox had Adrian Gonzalez on their side for the first time when facing the Yankees. (J. Meric/Getty Images)
By Dan Shaughnessy Globe Columnist / March 15, 2011

FORT MYERS, Fla. — It felt like Game 1 of the American League Championship Series. Except for the fact that there were only 7,859 fans and the starting pitchers were Alfredo Aceves and 20-year-old Manny Banuelos.

But this was not your typical spring training game. It was Red Sox-Yankees, the mastodons of the majors, duking it out for Grapefruit League supremacy last night. In the spirit of this hakuna matata spring of 2011, the Sox prevailed, 2-1.

Three hours before the first pitch it was clear the Yanks were visiting City of Palms Park. Neighborhood parking lot profiteers jacked up their prices from $5 to $7. During batting practice, the field was littered with assorted sponsors, frauds, and celebrities. A guy who hates Republicans (Keith Olbermann) stood alongside a guy who hates the Patriots (Bill Polian). Terry Francona’s dad, the original Tito Francona, hung out by the Sox dugout. Spaceman Bill Lee (who often spoke of “Steinbrenner’s Brown Shirts’’) made the “play ball’’ announcement.

There was lots of activity in the television booths. ESPN broadcast the game nationally with Dan Shulman, Orel Hershiser, and Bobby Valentine behind the mikes. NESN countered with Don Orsillo, Jerry Remy, and Heidi Watney (signing autographs and bragging about cousin Nick). YES said “no’’ and had the game blacked out in Yankee-land.

Meanwhile, Francona went with 8/9ths of his everyday lineup. Mike Cameron started in place of J.D. Drew, but otherwise this was the group we expect to see on April Fool’s Day in Arlington, Texas. It marked the first time Carl Crawford and Adrian Gonzalez ever appeared on the same lineup card.

We’re all still getting used to the strange notion that the Red Sox are favorites and the Yankees underdogs, but Sox Nation certainly seems comfortable with the role reversal.

“I can understand it,’’ said Cashman. “They had a heck of a winter and they have a heck of a team. They don’t have any question marks. With that status comes the pressure of being the team to beat. I’ve been both, and none of it really matters. You still have to play the games.’’

What does Cashman think when we say his team is old?

“We’ve been called everything in the book,’’ he said. “Our job is to be called champions.’’

It always comes down to pitching and at this juncture, the Sox have more. Any fan would prefer a starting quintet of Jon Lester, Josh Beckett, Clay Buchholz, John Lackey, and (gulp) Daisuke Matsuzaka over CC Sabathia, A.J. Burnett, Phil Hughes, Freddy Garcia, and Ivan Nova. Mariano Rivera is still the best closer around, but Boston loves its trio of Jonathan Papelbon, Daniel Bard, and Bobby Jenks.

The Sox put five runners on board in the first two innings but failed to score. The Yankees broke through with a run in the third on doubles by the immortal Jesus Montero and Gardner.

Kid southpaw Banuelos looks like the real deal. He walked three in his 2 2/3 innings, but struck out Crawford in the first and Kevin Youkilis in the third.

“I think the Yanks should bring him along slowly,’’ Francona said sarcastically. “Very, very slowly. Like sometime in 2015.’’

Banuelos yielded to No. 82, Steve Garrison, another lefty.

Get used to seeing the portsiders. Four of the first six batters in the Sox lineup are lefthanded, and that’s going to encourage teams to rig their rotations to feature lefties against Boston. It should be good for Cameron, the only righty swinger among Boston’s top four outfielders.

Papelbon came in for the fifth, to the tune of “I’m Shipping Up to Boston.’’ The Big Galoot got the side in order. Sitting in the Sox dugout, Olbermann seemed pleased with the Big Galoot.

Sox fans enjoyed the sight of catcher Jarrod Saltalamacchia throwing out Granderson attempting to steal second in the sixth (“That was exciting,’’ said Francona). They also saw Swisher swing and miss on a two-strike pitch from Jenks.

The Sox finished the spring 2-0 against the Bronx Bombers. They’ll play 18 times this season, starting three weeks from Friday in the 100th Fenway home opener. Then comes the ALCS. We expect it to go the full seven games. Just like in 2003 and 2004.