He allows 1 run in three innings 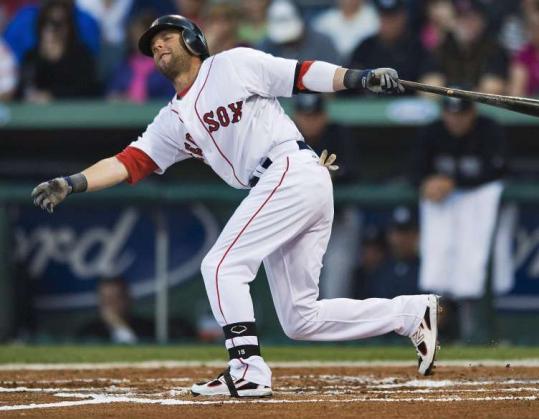 FORT MYERS, Fla. — Alfredo Aceves deviated from his usual pregame routine last night, going out during batting practice to say hello to some of his former teammates with the Yankees.

The 28-year-old righthander spent parts of three seasons with the Yankees before being released in December.

Although Aceves pitched well in 2009, winning 10 games for the World Series champions, the Yankees thought he lingered too long on the disabled list last season with a back injury.

“Ace was great for us. It’s unfortunate that he had so many back issues last year,’’ manager Joe Girardi said.

“I think we missed him a lot; he was a guy that could bridge us from the fourth to the seventh inning a lot. I wish him the best of luck.’’

Aceves was solid last night, allowing one run on three hits over three innings as the Red Sox beat the Yankees, 2-1, before a sellout crowd of 7,859 at City of Palms Park.

Aceves has no regrets about how his time with the Yankees ended.

“It was out of my hands. We do the best we can do out there in the field,’’ he said.

Aceves has allowed four earned runs in 10 1/3 innings for the Sox this spring. There have been good signs (two walks) and bad (10 hits) along the way. He is competing for a spot in the bullpen but could be in the Triple A rotation to start the season.

“I came here and worked hard. I like to play baseball,’’ Aceves said. “What else can I say? I’m trying to have a great spring training and we’ll see what happens.’’

The Sox scored the winning run in the seventh inning when Jarrod Saltalamacchia grounded into a force with the bases loaded.

Papelbon, who allowed three runs while getting just one out in a third of an inning against Minnesota Friday, had a perfect fifth inning.

Getting some work Clay Buchholz threw 40 pitches over three innings and Tim Wakefield 37 over two in a simulated game before the real thing started.

Both will start Friday, Buchholz at home against the Tigers and Wakefield against the Rays in Port Charlotte.

“I wanted to go out there and throw some curveballs, flip them first pitch, change the arm angle and throw them in the dirt,’’ Buchholz said.

“I did basically what I wanted to go out there and do.’’

Iglesias said he never had faced a knuckleballer before.

“Amazing. It’s hard to hit,’’ he said after taking an 0 for 3 against Wakefield.

“Hope he’s too young to make the team,’’ he joked before the game. “I think for this young man’s future, they should go slow with him. Very slow.

“I actually mentioned that to [Yankees general manager Brian Cashman] the other night. I say it out of respect: they just need to go slow. You rush a guy like that, it will be bad.’’

Shot back Girardi: “Kind of like they did with Buchholz and [Jon] Lester and Daniel Bard.’’

The 24-year-old righthander appeared in five games for the Yankees this spring, allowing three earned runs on six hits and four walks over 3 2/3 innings. He struck out four.

Turpen was acquired from the Giants last July 31 for Ramon Ramirez. He then had a 4.91 ERA in 12 appearances for Double A Portland.

The Red Sox made $25,000 in the deal, half of what the Yankees paid to select Turpen.

Martinez hit .313 with 28 home runs for the Sox after being obtained from the Indians at the trade deadline in 2009. He signed a four-year, $50 million free agent deal with the Tigers.

“All the things the people in Cleveland said about him came true in a hurry,’’ said Francona.

“He’s a great kid, solid professional, really good hitter. That won’t change because he went to another team,’’ Francona said.

Francona also had a great relationship with Martinez’s son, 6-year-old Victor Jose. The younger Martinez had the run of the clubhouse last year and Francona often pitched rolled up socks to him.

More than $4,600 was raised. The Red Sox Foundation also donated $50,000. Fans can help by making a donation to the Red Sox Foundation. They can log on to www.redsoxfoundation.org to make a tax-deductible donation via credit card online or by mail via check/money order. All donations will support Red Cross relief efforts in Japan.

Slumber party With games in Lakeland and Orlando the next two days, the Sox will have Francona, the coaches, and 10 young players stay overnight tonight . . . Indianapolis Colts vice chairman Bill Polian was on the field before the game along with former MSNBC personality Keith Olbermann . . . NESN’s Heidi Watney was still celebrating the victory by her cousin, Nick Watney, in the PGA Tour’s Cadillac Championship in Miami Sunday.