Yankee is impressed with work of Iglesias 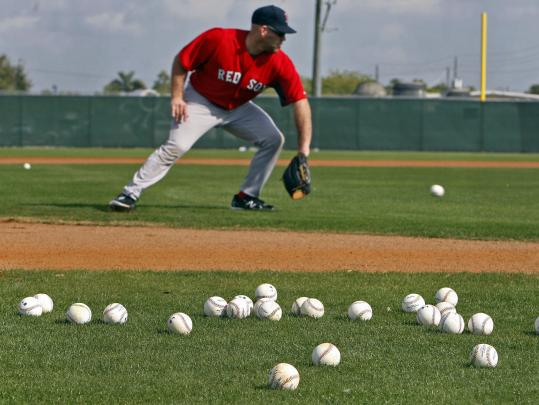 Back at third this season, Kevin Youkilis’s fielding was just fine yesterday; in this drill players toss balls they catch off to the side and pick them up later. (Jim Davis/Globe Staff)
By Nick Cafardo and Peter Abraham Globe Staff / February 22, 2011

“That kid is going to be sensational,’’ said Rodriguez yesterday from Yankees camp in Tampa.

Rodriguez invited Iglesias to work out with him in Miami over the winter, and said, “I was so impressed with him. He works hard and he’s such a good kid.

“His hands . . . great hands. Really, really stood out for me. He’s going to be a good one. The Red Sox fans should be very excited to see this kid in the future.’’

“It’s a Miami thing,’’ Rodriguez said. “We had him over and he worked hard.’’

Iglesias, 21, signed in July 2009 after defecting from Cuba. He hit .285 for Double A Portland last season, but had only 221 at-bats because of a broken finger.

Iglesias said last week that he worked out with Rodriguez for three weeks and called the intensity of the training “ridiculous.’’

Medical matters The Red Sox have changed how they will disseminate injury information to the media.

Rather than have manager Terry Francona give details to reporters, the team will issue press releases and Francona will answer more general questions.

The process started yesterday with an update on the condition of Adrian Gonzalez.

“To try and alleviate some of the confusion,’’ Francona said. “I’m actually hoping as the season progresses this year, we’ll try and do a little bit more like this. Take some of that out of my hands so I’m not guessing so much.’’

Francona has often missed details when asked about injuries. That left the players to fill in the gaps, a process that occasionally became contentious or confusing, particularly concerning Jacoby Ellsbury and his fractured ribs.

“I do think we’re going to try and do it a little bit differently this year, partially because of my inadequacies and being able to explain. Probably put other people in difficult [positions]. But I’m also the person [who is] supposed to answer the questions,’’ Francona said.

But while Francona said the team would try to be “more consistent’’ with its information, this could be a step toward the Cold War-style secrecy employed by the Patriots and coach Bill Belichick.

“What’s the word, a little Belichickian?’’ Francona said. “Is that the right word? Is that a good word?’’

Family matters Dustin Pedroia was given permission to miss today’s workout to attend to a family matter. Jonathan Papelbon missed Sunday’s workout for a similar reason. He returned yesterday and, as scheduled, threw live batting practice . . . Francona was named to the National College Baseball Hall of Fame. Francona was an outfielder at Arizona from 1978-80. He won the Golden Spikes Award in 1980 as the national player of the year. He led the Pac-10 South in hits, RBIs, and doubles in his final two seasons and was named most outstanding player of the 1980 College World Series after leading the Wildcats to the title. Francona spent parts of 10 seasons in the majors and hit .274 after being a first-round pick of the Expos in 1980. Francona will be inducted July 3 in Lubbock, Texas. Other honorees include Dick Groat, Tim Wallach, and Oddibe McDowell.

Taking it easy Pedroia is being cautious with his surgically repaired left foot, wearing sneakers for part of the workout before changing into spikes. “It feels fine,’’ he said. “Just giving my feet a break sometimes.’’ . . . Daisuke Matsuzaka threw 38 pitches in live batting practice, facing Mike Cameron and Ryan Kalish. He threw mostly fastballs with a few sliders and had trouble with command . . . Ryan Westmoreland, who had brain surgery last March 16, has started taking on-field batting practice, according to ESPN. The 2008 fifth-round pick from Rhode Island will travel to Boston today for a checkup with his neurologist and is expected back in minor league camp later in the week.