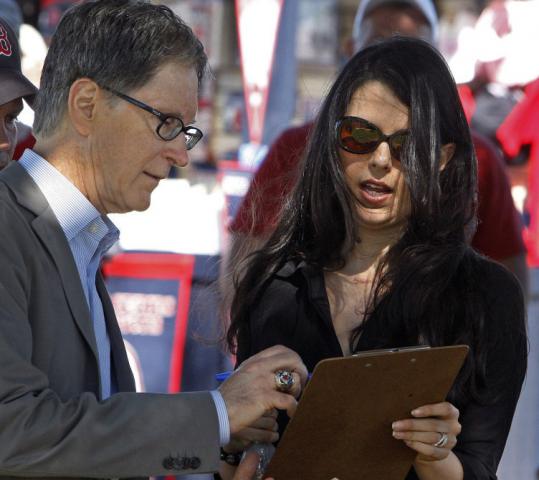 The players, who were assembled for a meeting, gave the trio a standing ovation. It was their way of acknowledging the lengths ownership went to improve a team that finished in third place last season.

“I’ve never seen anything like that before,’’ said left fielder Carl Crawford, one of the high-profile additions. “It was from the heart, too. Players appreciate when the owners stand up like that.’’

As Henry, Werner, and Lucchino enter their 10th season with the team, their vision of what the Sox could become has materialized in the form of two championships, a renovated Fenway Park, and annual expectations to be one of the best teams in baseball.

The Sox, who haven’t been to the World Series since winning it in 2007, are favored to return this year.

“This team has enormous potential,’’ said Werner, who pointed out that 16 of the players in camp are former All-Stars. “We’re tremendously excited to start and looking forward to actually playing the games.’’

Henry said the Sox accomplished all of their goals over the winter when they signed Crawford, traded for Adrian Gonzalez, and rebuilt their bullpen.

“You make plans every offseason,’’ he said. “It is impossible to predict what’s going to happen. But this offseason was tremendous.’’

Henry had reservations about giving Crawford a seven-year contract, the longest deal in his tenure as owner. But he was convinced that Crawford’s versatile skills merited a long-term commitment.

“He’s the right player for us,’’ said Henry. “We really rounded out our offense and defense. He brings so much speed and power. All these big deals are difficult decisions, but there is a lot of competition to sign them.’’

Said Lucchino, “John, Tom, all of us. We emphasize the commitment to winning to our players. We understand that’s the central purpose of this game.’’

“We do know that we have an intense rivalry with those guys,’’ Lucchino said. “We’ve got to be aggressive with our finances and we’re willing to do that.’’

The Red Sox also have money set aside to fund any trades that become necessary during the season.

“Yes, we always save some amount of money to be determined each year,’’ said Lucchino. “We will certainly look to make improvements if the team is in the hunt and [has specific needs]. I think that’s part of the obligation of ownership.’’

Henry said he not had any “substantive conversations’’ with the architect of the successful offseason, general manager Theo Epstein, about a contract extension. Epstein’s deal is believed to run through the end of the 2012 season.

“I always ask him how he’s doing,’’ said Henry. “Things are going extremely well from our vantage point and from his vantage point. We haven’t discussed contracts. I think the important thing is that we’re all extremely happy working together.’’

The Sox, Lucchino said, have spent “about $285 million’’ in renovating Fenway Park over the last 10 seasons and have no plans for a new stadium. Engineering studies have shown the Sox can remain at Fenway for decades.

“They’ve told us that we will have Fenway Park with all the infrastructure, structural improvements, pipes, all of the back-of-the-house stuff [and] concrete repair . . . for another 40 to 50 years,’’ Lucchino said. “It doesn’t mean you’ll be playing there another 40 or 50 years. But it means it has the life expectancy of that long. I’ve always taken 10 years off. When I look at it, I think 30 years as the potential.’’

The Sox had their first full-squad workout after the meeting, spending about 90 minutes working out in front of a large crowd under sunny skies.

“It’s a great feeling, you put the uniform on, you’re back with guys you care about and a team you care about,’’ manager Terry Francona said. “Everybody who likes baseball feels the same way. It’s a good feeling.’’

Lucchino ventured out to right field during batting practice, standing next to David Ortiz for about 20 minutes. He shagged a few balls himself, flipping one to the crowd.