Games, but not on the schedule 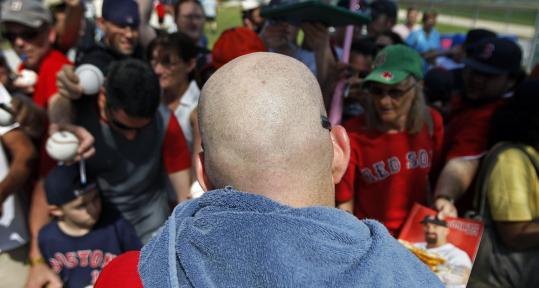 FORT MYERS, Fla. — It’s not easy being the New York Yankees, those plucky hopefuls in the American League East.

“It’s a lot of fun because we’re the underdogs this year,’’ first baseman Mark Teixeira told reporters in Tampa yesterday. “I love it. No one is picking us right now. We have to re-prove ourselves this year. The Red Sox made a lot of great improvements.’’

“I think it’s a good approach,’’ he said. “I want them to collectively feel that we have to fight, scratch, and claw for it. We’ve worn the target of being the hunted, so let’s be the hunter and see if that works well for us.

“If this was a horse race, [the Red Sox] would have the inside lane and the pole position. That doesn’t mean you win the race.’’

“Ordinarily he’s such a straight shooter,’’ Lucchino said. “But he’s not above a little gamesmanship, is he?’’

“I don’t see us as clear favorites,’’ he said. “I see the teams as fairly evenly matched. We’ve got our work cut out for us to hope to win the division. That’s just my opinion.’’

Lucchino the man? Commissioner Bud Selig has said he plans to retire after the 2012 season. Lucchino has been mentioned as one potential candidate to replace him.

But he tamped down that idea, saying it was not realistic.

“The speculation, uncomfortable as it’s been, is flattering,’’ he said. “But I’m really very content where I am. If you’re a baseball executive, this is the best place to be. I love Boston, New England. My family loves it. It seems the rest of my career was sort of building up so this could be the final stage of it.’’

Lucchino, 65, also questioned whether he would get the support of enough owners.

“I can’t speak for the whole organization,’’ he said. “I can say that I personally think there’s something beneficial there that could work out. But we haven’t debated it internally, nor have we been asked to. It’s a discussion that’s taking place at the commissioner’s level.’’

Lucchino also called for baseball to change its revenue-sharing system during the coming talks for a new collective bargaining agreement. He and Henry have been critical of teams who do not invest the money in their baseball operations.

Plans for Liverpool Team chairman Tom Werner doubles as the chairman of Liverpool, the English Premier League soccer team owned by Henry. He said there are tentative plans to have the Reds play at Fenway Park in 2012.

“It won’t be this summer, but it might be next summer,’’ he said.

Fenway hosted a match between teams from Scotland and Portugal last July.

Werner also said the Red Sox would be open to the idea of playing games in England. Lucchino said different scenarios have been discussed but nothing substantial. He believes regular-season games would have more appeal but the organization would have to factor in how that would affect the team competitively.

Short stint The first full-squad workout lasted only 90 minutes. The pitchers were given a day off from throwing but will start to face hitters in batting practice today . . . First base coach Ron Johnson arrived at camp after missing a few days to attend to a family matter . . . Two prospects, Kyle Weiland and Stolmy Pimentel, will start against Northeastern and Boston College, respectively, in Saturday’s day/night doubleheader . . . Francona liked what he saw from Jacoby Ellsbury, who missed much of last season with fractured ribs. “I think Jacoby looked extremely healthy and strong,’’ he said.