Pitcher plans to work on limiting his walks 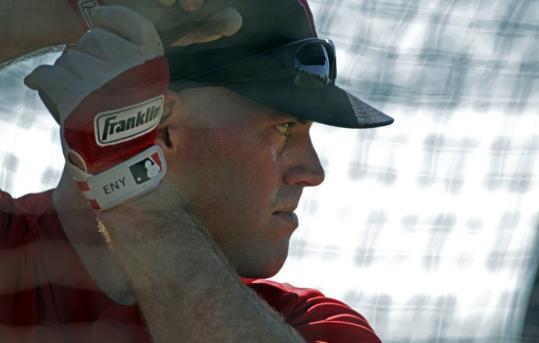 Red Sox third baseman Kevin Youkilis is the picture of concentration as he waits for a pitch in a photo shot through the netting of a batting cage in Fort Myers. (Jim Davis/Globe Staff)
By Peter Abraham Globe Staff / February 17, 2011

FORT MYERS, Fla. — Jon Lester was asked the most standard of spring training questions yesterday. Is there anything in particular he plans to work on?

His answer was as quick as his fastball.

“Walks,’’ Lester said. “That’s the main thing. Too many free passes last year; too many long innings; too many two-out walks that add 10, 12 extra pitches that aren’t needed. That’s an extra inning, that’s an extra arm out of the bullpen.’’

“I think it’s more or less mental,’’ Lester said. “Sometimes you get two quick outs and you think, ‘Oh, I’m out of this inning.’ You’re really not. That’s the main thing, working on that mental focus on every pitch, every hitter, and not worrying about how many outs there are.’’

Lester doesn’t plan to spend any time trying to figure out why he’s 3-6 with a 4.76 ERA in the 17 career starts he has made before May 1.

“In the end of the season, it all comes out in the wash,’’ said Lester. “We’ve tinkered with different things down here. You know what? I’m just going to get ready for April. Whatever happens, happens. I’m going to try and put myself in the best position to win every game I pitch.

Lester was 19-9 with a 3.25 ERA last season. He made the All-Star team for the first time and finished fourth in the American League Cy Young voting.

Lester had a chance at 20 wins, but he allowed eight runs on nine hits against the White Sox Sept. 30, lasting only four innings in his final start of the season.

“The last start, that’s the last thing I remember,’’ he said. “A little bitter taste in my mouth this offseason. It took a little while to get over it.’’

No making it up Jacoby Ellsbury had only 78 at-bats last season. At the age of 26, he lost a season of development.

“When you’re that age, repetition is really good,’’ said manager Terry Francona. “The 500, 600 at-bats young players get, they generally, if they’re good players, get better.

“That’s not going to help. But that doesn’t mean he can’t be a terrific player.

“When guys miss time, sometimes it takes time [to come back]. Maybe it won’t. Hopefully he falls right back into where he was. But those are important years of development for young players.’’

Francona said there are no plans to give Ellsbury extra playing time in spring training.

“I don’t think that’s probably correct,’’ he said. “I don’t know if 10 extra at-bats in spring training necessarily makes up for a lost year. You can only go at a certain pace in spring training or you’re going to run guys into the ground.’’

Francona said Ellsbury is free to try to steal as many bases as he wants in spring training. There are no restrictions on him.

Clean slates Righthanders Brandon Duckworth and Tony Pena Jr. were cleared to throw off the mound after MRIs on their throwing shoulders came back clean. Both had been shut down for a day. “We just wanted to make sure they were able to throw without risk,’’ Francona said . . . Jarrod Saltalamacchia is 6 feet 4 inches, 235 pounds. He’s “a big son of a gun’’ according to Lester. “When he comes out there and says something to you, you listen to what he says,’’ Lester said . . . Former Red Sox pitcher John Smoltz interviewed a number of players for the MLB Network. Lester, Josh Beckett, Clay Buchholz, and John Lackey did theirs as a group . . . Among the prominent players, only Mike Cameron, Carl Crawford, J.D. Drew, Jed Lowrie, David Ortiz, and Marco Scutaro have yet to make an appearance in camp. All are expected today, the report date for position players. The first full-squad workout will be Saturday.