THIS STORY HAS BEEN FORMATTED FOR EASY PRINTING
Baseball notebook

It’s a nice position to be in

Versatile Youkilis glad to be at third 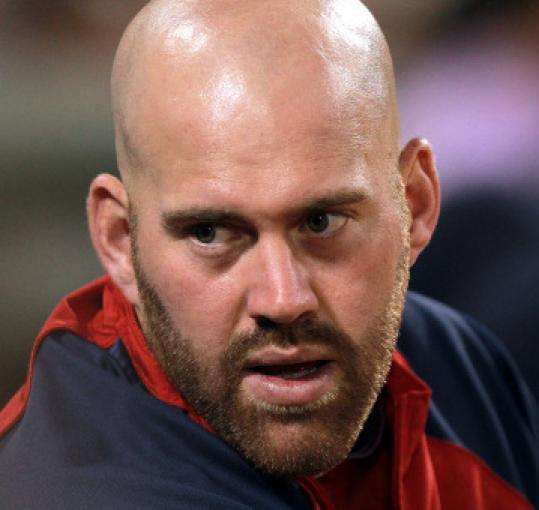 KEVIN YOUKILIS
Back where he wants to be
By Peter Abraham Globe Staff / December 8, 2010

LAKE BUENA VISTA, Fla. — Kevin Youkilis won a Gold Glove playing first base in 2007 and has become one of the best players in baseball at that position. But in his heart, he has always been a third baseman.

So the news that the Red Sox acquired Adrian Gonzalez to play first base was welcomed.

Youkilis has started 180 games at third base over his career, but only two last season. The Sox advised him in October to get ready, knowing that Adrian Beltre might leave as a free agent. When the Gonzalez trade was made, general manager Theo Epstein and manager Terry Francona called to tell Youkilis the transition back to third was on.

“He’s really excited,’’ Francona said. “That’s something that I hope doesn’t go unnoticed, how fortunate we are that he can do this. I don’t know how many first basemen can just pick up a glove and go over and play third and probably do it fairly seamlessly.’’

Youkilis has always been willingly versatile, having started games at four positions since being called up in 2004. But he wants to stay in the infield.

“I definitely threw out my outfield mitt,’’ he said. “So if anyone wants to know if I’m going to play outfield, that’s not going to happen unless all five of our outfielders go down.’’

Youkilis’s switch will be aided by having Gonzalez at first.

“He’s not only a great hitter, he’s a great first baseman,’’ said Youkilis. “So when I make some crazy throws over there from third, he’ll be able to pick them for me.’’

A plan for Cam As the Sox seek a righthanded bat, it’s worth noting they have one in Mike Cameron.

Cameron, who turns 38 in January, played in only 48 games last season because of torn abdominal and groin muscles that required extensive surgery. But he said Monday that he feels close to 100 percent.

“He had a miserable year health-wise last year,’’ said Francona. “From all accounts, he’s working hard and he’s doing really well. So, I guess I can see Cam playing every day.

“It’s easy to forget that a guy’s a good player when he’s injured and out for a while. I think we still view him that way.’’

Epstein said the Sox would assess Cameron once he gets to spring training. With Jacoby Ellsbury expected to return to center field, Cameron could play left.

“If he’s able to carry a regular load, I think he’ll be out there a lot,’’ Epstein said. “If he’s limited early, we can limit his role early, then it depends on what we do with the rest of the club the rest of the winter.’’

Ellsbury played only 18 games last season because of cracked ribs. Epstein said the outfielder no longer feels any discomfort. Francona, however, had a different report.

“A couple weeks ago, he still was feeling it in the back a little bit, which I think they thought was pretty normal,’’ the manager said. “I think we’re all going to take a deep breath when we see him out there running and not feeling it.’’

Jeter was peeved Derek Jeter’s three-year, $51 million deal with the Yankees was announced down the road in Tampa. The shortstop admitted to being annoyed that GM Brian Cashman told him to test the market after an initial offer was rejected. “To hear the organization telling me to go shopping, and I just told you I wasn’t going to, oh yeah, if I’m going to be honest with you, I was angry about it,’’ said Jeter. He said he never considered other teams . . . The Rockies signed infielder Ty Wigginton for two years and $8 million, while Arizona added J.J. Putz as a closer for two years and $10 million . . . The Mets signed righthander D.J. Carrasco and catcher Ronny Paulino . . . Outfielder Tony Gwynn Jr. has reached a preliminary agreement on a $675,000, one-year contract with the Dodgers . . . Rockies manager Jim Tracy collapsed around 1 a.m. yesterday. He was hospitalized because of mild arrhythmia, then released and returned home . . . The Pirates signed righthander Kevin Correia and lefthander Scott Olsen . . . Free agents Johnny Damon and Gary Sheffield were working the lobby. Sheffield wants to hook on with the Rays.

Giving him fits Rays manager Joe Maddon predicts big things for Gonzalez in Boston. “This guy is one of the best hitters that I’ve seen in recent time,’’ he said. “He definitely fits that ballpark’s abilities or his abilities match that ballpark well. I don’t like it. I think he’s really good. He’s going to wear out that left-field wall.’’ . . . Joaquin Benoit, who overcame a torn rotator cuff to pitch well for the Rays last season, was named the winner of the 21st Tony Conigliaro Award for spirit, determination, and courage. Tony’s brothers, Billy and Richie, will present the award at the Boston Baseball Writers Dinner Jan. 20 at the Westin Copley Place. Benoit signed as a free agent with Detroit this offseason.

Monique Walker of the Globe staff contributed and material from the Associated Press was used in this report. Peter Abraham can be reached at pabraham@globe.com. Follow him on Twitter @peteabe.