As trades go, a grand slam 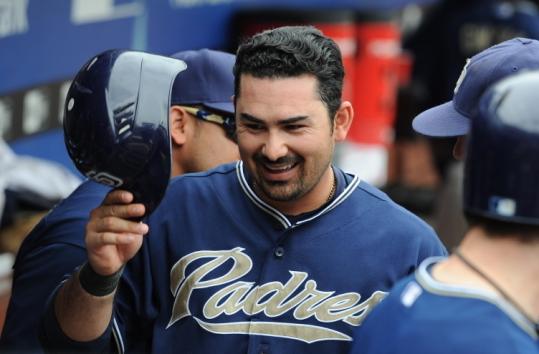 It’s been quiet on Yawkey Way the past month or so. The Red Sox have been in the Fan Witness Protection Program. It’s been Pats this and Pats that, how ’bout that Shaq, and save by Thomas! But now the Red Sox are back in the dialogue. Adrian Gonzalez is coming to town.

I keep waiting for the rest of the story. You know, the moment when Theo Epstein clears his throat and says, “Forgot to mention that we also had to give them Pedroia.’’

Just kidding. But it is in the too-good-to-be-true category. Gonzalez will more than make up for the defection of Victor Martinez. He’s also two years younger.

I’m not trying to fast-track him to Cooperstown or anything, but Adrian Gonzalez is the real deal. He has been carrying the Padres offense for five years, and he’s been doing it in the hitter-phobic confines of San Diego’s Petco Park, in whose power alleys home runs and doubles go to die.

In the last three years, he has averaged 35 home runs despite playing half his games in an unfriendly park. He has had 100-plus runs batted in three times in the last four years and 99 in the fourth. He’s a lefthanded hitter with the kind of stroke that Fenway has consistently rewarded over the years.

Patient? Glad you asked. He led the National League in walks in 2009 with 119. A lot of his walks have been intentional, as you might have suspected. As a testament to both his own prowess and the nature of his lineup support, he has finished fourth, second, and second in intentional walks over the last three years.

He was available because he has arrived at the career stage where the big money comes and the Padres need a lot more than Adrian Gonzalez to contend. He probably would have been dealt last year had not the Padres surprisingly found themselves in contention, a situation that was rectified rather brutally in the form of a 10-game losing streak between Aug. 26 and Sept. 5.

They snapped out of it enough to make things interesting for the Giants, but they were never again the same team. When the season was over, general manager Jed Hoyer knew it had all been fraudulent. His one major bargaining chip to beef up the roster was Gonzalez. And here he is.

So, assuming reports of the players involved are accurate, what is Hoyer getting?

Start with righthanded pitcher Casey Kelly, the Sox’ 2008 No. 1 pick who was signed as a combo shortstop/pitcher. The decision was finally made that he should stick with pitching, and the result was a disappointing 3-5, 5.31 season in Double A Portland. He had a WHIP of 1.61 and an unimpressive strikeout/walk ratio of 2.31/1.

They get first baseman Anthony Rizzo, a 2007 sixth-round pick who bounced back from a bout with Hodgkin’s lymphoma in 2008. A lefthanded hitter with some thump, he had 21 homers, 80 ribbies, and an OPS of .815 for those battling Sea Dogs.

They get the intriguing young Puerto Rican Rey Fuentes, a 2009 pick who received a bonus of $1.189 million after being drafted 28th overall. He is the cousin of Carlos Beltran, and he is all about the future, not turning 20 until February.

Fuentes was so-so at the plate at Single A Greenville last year (.270 with a .328 OBP), but he was 42 of 47 in the stolen base department. Giving him up had to give Theo a twinge, but, hey, you have to give up something if you want a guy like Adrian Gonzalez.

It’s an OK package from a San Diego viewpoint, but the relevant fact for the Sox is that it’s well within reason and it avoids parting with the organizational gem, Iglesias, who is still on target to be the starting shortstop in 2012. I believe we would call this deal the very definition of a no-brainer.

Almost forgot Gonzalez’s glove. Though the people who produce the “Fielding Bible’’ maintain that giving him the 2009 NL first base Gold Glove was a wee bit generous, they did have this to say in last year’s edition: “Smart player who has a good idea of where he wants to go with the ball when it’s hit to him . . . good hands on ground balls and low throws . . . as good as they come at fielding bunts.’’

So let’s see. In exchange for three prospects of varying degrees of promise, they receive a 28-year-old first baseman who hits for average and power, who flashes some serious leather, and who — managers loooove this — shows up for work every day, having missed five games in the last four years.