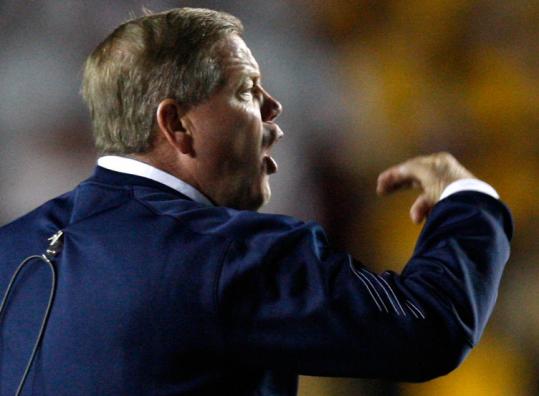 During a tight spot, Notre Dame coach Brian Kelly gets his Irish up along the sideline in the first half. (Barry Chin/Globe Staff)
By Dan Shaughnessy Globe Columnist / October 3, 2010

This was one of those only-in-Boston nights.

At opposite ends of the Green Line we got to see two of the signature sports programs/franchises in the world: the New York Yankees and the Fighting Irish of Notre Dame.

In Boston. On national television. On a spectacular autumn day/night (Gandhi’s birthday, if you must know).

Too bad there was chaos at the Fenway turnstiles and more upheaval at the Eagles’ quarterback position. Boston lads suffered beatdowns at the hands of their storied rivals at both venues.

In the first game of a day-night doubleheader (games that ran dangerously close together as the Sox tried to empty Fenway and make room for another sellout in the nightcap), the defending world champion Yankees beat the Sox in extra innings, 6-5. While the Sox took the field for Game 2, Notre Dame bolted to a 21-0 lead at Alumni Stadium. Twenty-five minutes before midnight, the Irish completed a 31-13 thrashing. The Yankees and Irish are the same article. The Yankees are to baseball what the Irish are to college football. They even shared the same field for a lot of years. Starting in 1925, Notre Dame in most years played Army at Yankee Stadium. After Babe Ruth and his pals were done winning the World Series, Knute Rockne would bring the Irish to the House That Ruth Built to play West Point in November. The Irish played 24 times at Yankee Stadium, 22 against the Cadets.

Here we are a decade into the 21st century and while the Yankees are still winning World Series, the Irish have fallen on ordinary times. Notre Dame came to Chestnut Hill with a 1-3 record and no aspirations of a national championship in the immediate future. They’re still recovering from the Charlie Weis error.

Making things tougher for the million-man march of Notre Dame subway alums, the Irish came to Boston losers of six of the last seven meetings against BC. That had to hurt. BC and ND are the only two Catholic universities playing Division 1 football. Notre Dame’s win last night gives the Irish an 11-9 series lead in the Catholic Super Bowl. The Eagles and Irish will play one another every year between now and 2019.

These are hardly the golden days of the rivalry. Back in 1992, when Tom Coughlin and Lou Holtz roamed the earth for BC and ND, respectively, the Catholic titans met on a November Saturday when both teams were undefeated and ranked in the top 10 in America. BC went to South Bend with a 7-0-1 record, ranked ninth in the nation. Unfortunately, the Eagles couldn’t contain Jerome Bettis and the Irish romped, 54-7.

A year later, the Eagles returned to South Bend and stunned the top-ranked Irish on David Gordon’s field goal, 41-39.

“One of my favorite games of all time,’’ says former Eagles sports information director Eddie Miller.

Good times. Sort of like when the Red Sox actually competed with the Yankees for supremacy in the American League East. (OK, cheap shot, but I couldn’t resist.)

This is not a Top 25 year at The Heights. BC last weekend was blanked by Virginia Tech in its first ACC contest. It was the first time BC was shut out in 12 years. Expectations are diminished for the Eagles of 2010, but even in a season in which both programs are down, Notre Dame still stands as the marquee game on the Boston College schedule. Virginia Tech and Clemson represent big draws, but nothing supersedes Notre Dame, regardless of the relative strength or weakness of the Irish.

Acknowledging the pomp of Notre Dame Week (it’s not exactly like Weber State at 1 p.m. on Labor Day weekend), BC coach Frank Spaziani said, “This is Carnegie Hall.’’

It marked the first time BC had hosted a prime-time television game since November 2007. It made for an interesting debut for BC’s freshman quarterback, Chase Rettig, a California gunslinger who enrolled in January intent on taking over as the starter.

Rettig got the nod because the Eagles gave up on 26-year-old former minor league pitcher Dave Shinskie, who was pulled against the Hokies last week. It was a rough debut for Rettig (“I was pretty nervous,’’ he acknowledged). In the final minute of the first quarter, BC trailed, 21-0, and the Eagles didn’t have a first down. He showed some brilliance with a 58-yard touchdown toss to Bobby Swigert, then hurt his ankle and was done for the night.

Mike Marscovetra took over and completed 22 of 37 passes for 193 yards with two interceptions. The Eagles have scored three offensive touchdowns in their last 14 quarters. There were moments when we wondered if Spaziani might turn back to Shinskie or senior specialist Billy Flutie, a wideout who was a very fine quarterback at Natick High School in 2005.

“I know we all want to talk about who the quarterback is and what the situation is, but there are other problems,’’ said Spaziani. “We’re trying to find an identity, leadership, and personality. We have to be better mentally, also.’’

Notre Dame coach Brian Kelly demonstrated that he is a man of class and caring when he played senior Barry Gallup Jr. at cornerback in the final two minutes. Barry Gallup Sr. has dedicated most of his professional life to the advancement of Boston College football, and getting Barry Jr. on the field in this game was the right thing to do.

It was midnight madness and hometown sadness at both ends of the Green Line.