THIS STORY HAS BEEN FORMATTED FOR EASY PRINTING
White Sox 5, Red Sox 4

All is lost for the Red Sox

No spot in playoffs; a dip in Chicago 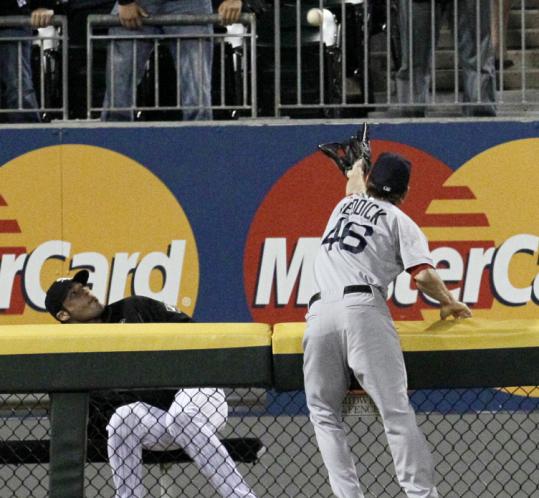 CHICAGO — The scoreboard in right field spelled out the grim news throughout the night. The Tampa Bay Rays were first to clinch their spot in the playoffs, beating the Baltimore Orioles at home.

Then came the final blow, delivered by way of Canada like a cruel winter cold front. The Yankees had beaten the Blue Jays and also were in. The Red Sox officially had been eliminated.

For only the second time in the last eight seasons, there will be no postseason baseball for Boston.

Their fate already decided, the Red Sox still had a chance to win a game last night. But it only got worse as they kicked away a lead and fell, 5-4, to the White Sox, giving up three runs over the final three innings.

That the injury ravaged Red Sox did well to delay their elimination until the final days of the season did little to cushion the finality of elimination.

“There’s no fun going home before you want to, regardless of what’s happened,’’ manager Terry Francona said. “I think the world of those guys in that clubhouse and the effort. I want to keep playing.’’

David Ortiz, the center of so many champagne celebrations over the years, spoke bravely about preparing for next season and praised the skill of the young players the team used this season.

But he acknowledged that being on the outside was a difficult emotion to deal with.

Fittingly, given what transpired so often during the season, it was the bullpen that cost the Red Sox last night. Ahead, 4-2, the Sox gave up a run in the seventh, another in the eighth, and a walkoff single by Dayan Viciedo with two outs in the ninth.

Another reliever, Matt Fox, came in and gave up the single to Viciedo.

Daniel Bard blew the save in the eighth inning when he walked Manny Ramirez and allowed an RBI double by Paul Konerko.

The latest bullpen meltdown wasted the effort of John Lackey, who gave up two runs over six innings. His only mistake came in the fourth when a two-strike fastball to Carlos Quentin cut over the plate and was lined to left for a two-run homer.

Quentin is 8 for 12 against Lackey with four home runs in his career.

Lackey shook his head when asked about watching the lead he handed off get wasted.

Last night only made official what was six months in the making. The Red Sox won their first game and never spent another day in first place, losing nine of their next 12 and building a trap they were never quite able to fully escape.

Along the way they were only 24-20 against the four worst teams in the American League, the Indians, Mariners, Orioles, and Royals. The Sox also are 5-11 in extra inning games and will finish this season with their fewest wins at Fenway Park since 2003.

Opening Day starter Josh Beckett, signed to a lucrative contract extension in April, has so far pitched in only 20 games and won six of them.

Closer Jonathan Papelbon blew eight saves, a career worst. Outside of Bard, the bullpen was a liability for much of the season.

Lackey, the big free agent acquisition of the offseason, had a lackluster season. A pitching staff expected to be one of the best in the game proved to be below average in the AL.

Star second baseman Dustin Pedroia was lost to injury for all but two games in late June. Fellow All-Star Kevin Youkilis played his final game Aug. 2 because of a thumb injury. Leadoff hitter Jacoby Ellsbury played only 18 games because of fractured ribs.

The Sox had enough to remain competitive but could not catch the Yankees and Rays.

“It’s a testament to these guys’ character that we stayed in it as long as we did,’’ Lackey said.

The Sox didn’t have much trouble getting to White Sox starter Edwin Jackson early in the game.

Adrian Beltre led off the second inning with his major league-leading 49th double. Jed Lowrie followed with a double into the left field corner to make it 1-0. The Sox made it 3-0 in the third, when J.D. Drew homered and Beltre hit a sacrifice fly. Ortiz added a home run in the sixth inning.

“It’s disappointing, obviously,’’ captain Jason Varitek said. “That’s the biggest thing. You work throughout the season to get an opportunity. All you want is a chance.’’