Sox left to make right moves on the fly 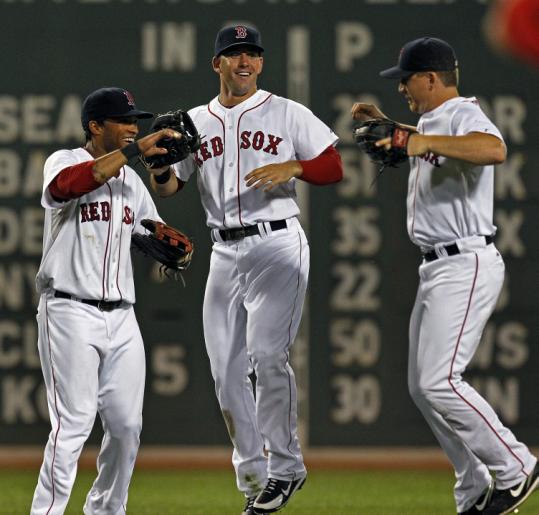 Red Sox right fielder J.D. Drew gave it a valiant try when asked to name all of the center fielders he has played with this season, coming up with seven of the eight.

Drew forgot Jonathan Van Every, which is understandable. The Sox have used 42 combinations in their outfield, the most in the major leagues this season. You have to go back to 1996, when 43 combinations were used, to find a season in which the Sox were so unsettled in the outfield.

“It has been on the fly,’’ said manager Terry Francona. “We’ve had a lot of guys not be available, which is why there are so many combinations.’’

That’s not the way Francona intended it, of course. His Opening Day combination of Jacoby Ellsbury, Mike Cameron, and Drew lasted four games, and they have not played together since.

Ellsbury ended up playing only 14 more games because of fractured ribs, while Cameron had two stints on the disabled list with muscle tears in his lower abdomen that eventually required season-ending surgery.

The long list of replacements included prospects from within the organization, veteran professionals called up from Triple A Pawtucket, players claimed on waivers, and the forgotten Van Every, who was acquired from Pittsburgh in a trade April 24 and lasted 21 games before being caught up in the carousel of change and traded back to Pittsburgh May 31.

It’s a long way from last season, when the outfield of Jason Bay, Ellsbury, and Drew started 109 games.

“When you look at last year’s club, the outfield paced us offensively,’’ said general manager Theo Epstein. “They were all pretty healthy and productive. What has happened this year made it hard to win as much as we wanted to.

“As a whole, we were happy with what we had. But we never got to see how it would have worked.’’

The Sox, who start a six-game West Coast swing in Oakland tonight, are nevertheless 16 games over .500 thanks in part to the versatility of players such as Darnell McDonald and Bill Hall, who have started at all three outfield positions and combined to hit 26 home runs.

“We’re fortunate we have guys who can play anywhere out there,’’ said McDonald, who has been the primary center fielder for much of the season. “Billy has played everywhere, infield and outfield. We’ve found ways to make it work.’’

The latest configurations have favored 22-year-old rookie Ryan Kalish, who was called up July 31 and became a regular, playing left field and now center.

“I played all over in the minors and it’s helping me now,’’ Kalish said. “I’m comfortable wherever I’m needed. But you never expect to see a team in the majors have this much change.’’

The one constant has been Drew, who has started 115 games in right field.

“I’ve been right in the middle of things,’’ said Drew. “This has definitely not been my healthiest year because I’ve had a lot of nagging injuries. But I’ve been able to stay in the lineup, for the most part.

“I actually have enjoyed it, watching a bunch of young outfielders get their feet wet. I’ve played the game for so long that when these young guys come up, I kind of just watch them. A guy like Kalish, he has been really good about asking questions. It’s fun watching him play.’’

The frequent switches have weakened the Sox defensively. Cameron said the outfielders have been unable to develop the trust that comes from experience. Players pause before chasing down balls hit to the gaps, unsure what the man next to them will do.

Francona has seen the same thing.

“I think it has showed at times that we’re inexperienced,’’ he said. “I don’t think you can replace Ellsbury and Cameron. [McDonald] has done a really good job, but he also has made some mistakes out there. I don’t think it’s realistic to go five, six, seven deep and expect guys to play perfect outfield.’’

Playing half the games at Fenway Park only adds to the challenge.

“This outfield is the most complex in the game,’’ McDonald said. “There are a lot of angles, you have the Monster, and right field is tricky. When you’re in right field, you can get lost out there. It’s so big.’’

Cameron shook his head as he considered the situation.

“It has definitely been a learning experience,’’ he said. “I’ve never been in a situation like this before. This was one year when you never really knew who was next to you. It has just been crazy.’’