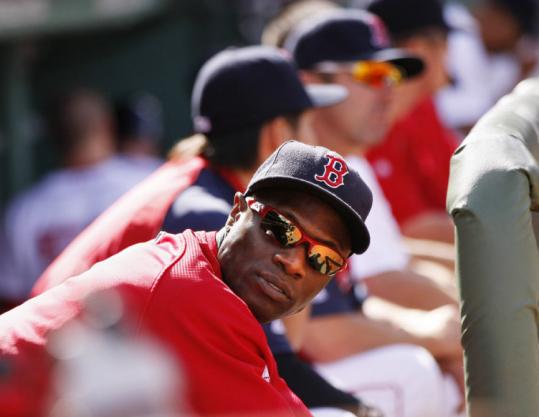 Mike Cameron walked gingerly into the Red Sox clubhouse at 10:15 yesterday morning, and used both hands to gently drop himself onto the padded folding chair in front of his locker.

It has been 10 days since Cameron had surgery to repair the abdominal tears that ruined his first season with the Sox. It took a surgical team 4 1/2 hours to perform all the necessary work.

Cameron had tears on both sides of his body and needed a restructuring of his groin muscles.

Still loopy from the anesthesia, Cameron randomly called friends on his cellphone from the recovery room and left a series of rambling messages. Manager Terry Francona was one of the recipients, although Cameron can’t remember placing the call.

Cameron needed assistance from his 16-year-old son to get around for a few days. But he has since started the rehabilitation process in earnest and expects to be fully healthy by Thanksgiving.

“I’ll probably play spring training as hard as I ever played in my life,’’ Cameron said.

Cameron was injured during spring training and got progressively worse. He still found a way to play in 48 games and hit .259.

“Quite an experience, I would say. I don’t think anybody ever takes for granted the things we’re able to do. But, man, what I would give to just be able to run free with no pain,’’ he said. “That’s probably the most important thing, the only thing I wish I would have had this year, would have been able to run free. I could have dealt with slumps, struggles, boos, sucking, and everything else.’’

Cameron had trouble sleeping, and on many days just walking around was painful.

“As soon as I said that I was going to have surgery, my mind started feeling so much better because I relieved so much stress,’’ he said. “I think the stress was not knowing, day to day when I got up, what I was going to get out of my body. I pushed it to the max sometimes. I pushed it overboard sometimes. I never felt like I underachieved in that department as far as just basically giving every ounce of what I could give that was some type of quality . . . To be considered as, like everyone says, an old center fielder or hurting, whatever, I got there pretty damn good.’’

Cameron said part of the reason he kept playing was to give Francona options in the outfield in the wake of Jacoby Ellsbury missing most of the season because of rib fractures.

“I probably wouldn’t have been in there [otherwise]. But I was able to play,’’ Cameron said.

Scutaro to have MRI
Marco Scutaro, who has been playing with a sore right shoulder for weeks, did not start yesterday and is scheduled for an MRI tomorrow.

Scutaro had two hits and the Sox’ only two RBIs in Saturday’s doubleheader. But he came away wincing after several plays in the field and Francona said he noticed Scutaro favoring his shoulder at the plate.

Scutaro pinch hit yesterday in the ninth inning and flied to left to end the game.

Desperate times
Francona said the team still plans to use Clay Buchholz on three days’ rest against Tampa Bay Wednesday, despite the long odds of earning a postseason berth.

The 26-year-old righthander has been handled with caution throughout his career and has never before pitched on short rest.

But Francona called it an “obvious’’ move.

“We’re trying to win. We want to win,’’ he said. “You can either go a bullpen day against Tampa or pitch Buch.’’

Land of opportunity
Righthanded reliever Robert Coello joined the Red Sox before the game, becoming the 19th player to be called up from the minors this season and the 53d player to spend at least one day on the active roster.

Drafted by the Reds as a catcher in 2004, he never got in a game and was released. The Angels tried him as a pitcher and Coello had a 1.37 earned run average in rookie ball, which was not enough to prevent him being released again. Coello then made his way to the independent Golden League and stints with two teams in Canada. The Red Sox signed him before the 2009 season.

“Kind of an interesting story. Not the route a lot of guys have taken,’’ Francona said. “That doesn’t mean he can’t be successful.’’

He’s back
Dustin Pedroia, who had surgery on his left foot Friday, was in the clubhouse on crutches before the game. He had a cast that came up to just below his knee. “Stay home,’’ Cameron yelled to him. “I’ve got nothing to do at home,’’ Pedroia said. “I’m thinking of taking grounders.’’ . . . Pawtucket manager Torey Lovullo told team broadcaster Dan Hoard that Mike Lowell made a tremendous impact on the team during his five-game rehab stint this season. “I don’t want to take anything away from all of the guys that were here, but Mikey Lowell was probably the best teammate and big leaguer that came down,’’ Lovullo said. “He came on board and showed these guys what it is like to be a big leaguer.’’ . . . Jason Varitek caught five innings in Pawtucket’s 5-4 loss to Syracuse in the first game of a brief rehabilitation assignment. He was 1 for 2 with a single and a sacrifice fly, and threw out Michael Martinez trying to steal in the first. Varitek, who is coming back from a broken right root, is scheduled to DH today and rejoin the big club tomorrow . . . Francona said righthander Michael Bowden would be recalled once Pawtucket’s season was over. Bowden was the losing pitcher, coming into a tie game in the eighth and allowing two runs, including a solo homer . . . Bill Hall had not walked in 85 plate appearances dating to July 28, before getting a free pass from Mark Buehrle in the second inning.