Lowell has played with fractured rib 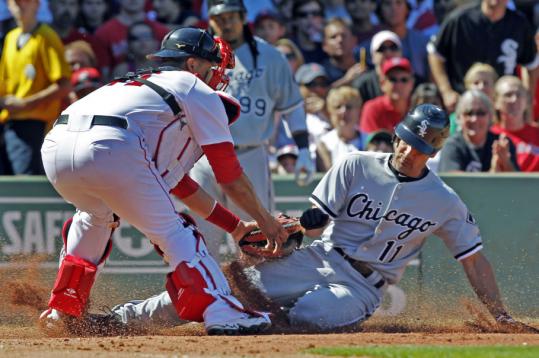 Along with uniforms and hats, perhaps the Red Sox will hand out flak jackets when the players report to Fort Myers for spring training next season.

Mike Lowell revealed yesterday that he has been playing with a non-displaced rib fracture since a collision with Toronto’s John McDonald Aug. 20.

“And [Adrian] Beltre didn’t even hit me,’’ said Lowell, referring to the fractured ribs outfielders Jacoby Ellsbury and Jeremy Hermida suffered this season after running into the third baseman.

Lowell thought he had merely a bruised rib at first. When the injury did not heal quickly, he had an X-ray in Tampa last weekend that revealed the hairline fracture of the sixth front rib.

Lowell had an MRI and CT scan Friday to make sure the injury wasn’t anything serious.

“As long as I can deal with it, I’m medically cleared to play,’’ he said. “It’s fine with me. I think a fracture makes it really sound worse than what it is.’’

Lowell has played the last two seasons with a surgically repaired right hip and has gotten accustomed to playing in pain. The 36-year-old also is planning to retire following the season and wants to wring every last ounce of baseball out of his system before he goes.

“Compared to my hip last year, this is a much lesser inconvenience,’’ Lowell said. “Obviously I feel it sometimes. When I finish all my [pregame hitting] routine, my cage routine, that’s when I feel it. But I don’t think it changes my swing, so I’m cool with it.

“If it gets to a point where I have to do something different at the plate or on the field, then I have to take a step back and be smart. But it’s not going to get worse and it’s actually getting better. It’s not a huge deal.’’

Manager Terry Francona has known about the injury right along but said Lowell requested no information be given to the media. WEEI.com first reported it yesterday.

Lowell seemed to find the whole thing amusing. He has hit .269 since suffering the injury and has played first base adeptly.

Varitek dons PawSox
Jason Varitek will start a rehab assignment with Triple A Pawtucket today. He is scheduled to catch four or five innings against Syracuse at McCoy Stadium. He would then be the designated hitter tomorrow before rejoining the Red Sox Tuesday.

The team captain has not played since breaking a bone in his right foot June 30.

Varitek has been catching in the bullpen and taking batting practice for several weeks. The last step of his recovery was being able to run at full speed and change direction.

With Pawtucket’s season ending tomorrow, Varitek was running out of rehab options.

“I know he wanted to get somewhere and play,’’ Francona said.

Once Varitek returns, the Sox will have four catchers on the roster.

Clearing the air
Kevin Youkilis confirmed that Manny Ramirez apologized to him in June for a dugout incident between the two in 2008.

“That wasn’t the first [incident]. There’s stuff that goes on here all the time. You would never have heard that from me anyways. It is what it is. Manny and I were cool after that anyways. It wasn’t a big deal,’’ Youkilis said. “Things happen. For me, it was just one of those things, off the bat, I said, ‘Manny, no worries, man.’ ’’

Youkilis said he had forgotten about the dust-up before Ramirez spoke up while standing on first base when the Dodgers visited Fenway.

“When things come about that need to be addressed, you address them. You can’t be angry with guys all the time,’’ Youkilis said. “You can’t be upset. Back four or five years ago, I probably would have gotten angry at stuff like that. But now I’m to the point where I just don’t get as angry at that stuff.’’

Pedroia checks in
Francona spoke with Dustin Pedroia after he had a screw inserted in his broken left foot Friday. Other than calling himself “a moron,’’ the feisty second baseman seemed fine.

“He went home and had a long night,’’ Francona said. “I talked to him this morning and he sounded pretty upbeat. It sounded really encouraging. When they went in and saw the amount of healing, that it was in a line. Just sounded really optimistic. That was good to hear.’’

Pedroia will need roughly three months to recover and rehabilitate from the surgery. That will allow him to start his preseason workouts around Dec. 1, the usual timetable.

“That was a big reason why they did it yesterday,’’ Francona said. “Once this thing heals, he’s going to be OK.’’

Pedroia was injured June 25 when he fouled a ball off his foot and did not return until Aug. 17. He played in only two games before feeling too much soreness to continue.

Pedroia later admitted to overextending himself. But Francona could not fault him for that.

“Guys are built to play,’’ said Francona. “The really special ones — and Pedey, I certainly would put [in] that category — they find a way, they try. You talk about [not] wearing the [medical] boot or cutting corners. That’s kind of what the good ones do. Pretty special young guy, he gave it a good shot.’’

Hang in there
It has been a rarity this season, but the Red Sox broke out their alternative “hanging Sox’’ caps for the second game of the doubleheader . . . Rookie lefthander Felix Doubront, who has not pitched since Tuesday because of a sore upper pectoral muscle, played catch yesterday and could be cleared to pitch in the next day or two. Another rookie lefthander, Dustin Richardson, retired both batters he faced in Game 1 . . . Clay Buchholz, the Game 1 loser, is 0-2 with a 9.95 earned run average in three career starts against the White Sox, allowing 19 hits over 12 2/3 innings. “I’ve never really fared too well against this team,’’ he said . . . The Sox turned three double plays in Game 1, matching their season high.