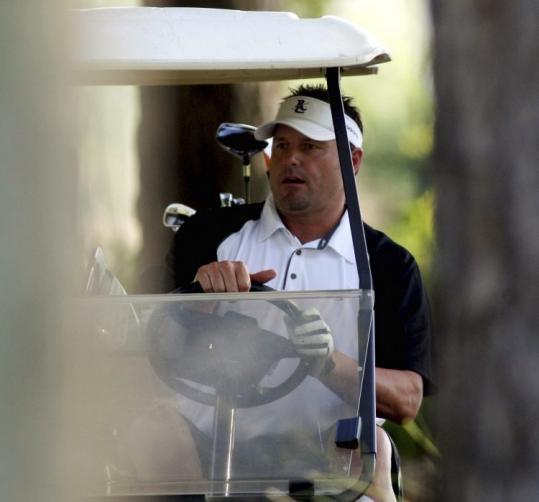 Try this one on for size.

It was that other guy.

They tell me someone threw a piece of a shattered bat at Mike Piazza in the 2000 World Series. I would never do a thing like that. That’s Rocket territory.

Roger Clemens didn’t win those 354 games, strike out those 4,672 batters, or take home those seven Cy Young Awards. It was Rocket. Whatever took place in the gym, between the lines, or perhaps in a bedroom where a trainer named Brian McNamee was administering some PEDs happened to Rocket. Anything that had to do with being a private citizen/son/sibling/husband/father, well, that was Roger’s business.

Sure makes sense to me. If you start with the far more than reasonable premise that someone inhabiting that particular body has indeed committed perjury by lying in front of Congress, and are thus looking for an explanation as to why said person would court jail time by doing such a thing, it all makes sense, or at least as much as anything can make sense when it comes to the utterances of William Roger Clemens/Rocket.

Only someone very new to the game would react favorably to the question recently posed by Clemens/Rocket lawyer Rusty Hardin. The attorney asked the public to consider the idea that Roger/Rocket’s unwavering assertion of innocence in the face of jail time should be taken as 100 percent proof that he is telling the truth. He apparently knows the consequences of a conviction. If he loses this trial, he will be the 24/7 guest of the government for somewhere between 16 and 21 months. He could avoid that fate right now by fessing up, which would result in probation, a la Miguel Tejada.

If the person in question were anyone else, we would be inclined to follow counselor Hardin’s logic. But it’s not anyone else. It’s the one and only Roger/Rocket. After 27 years of observation, we know he is not just anyone else. He is an unfathomably obtuse individual who has been gifted with a strong right arm.

Whoever is doing the thinking has perhaps decided that juries are fallible, so a trial is worth the risk. That deep thinker may even be counselor Hardin. Whatever, the feds’ conviction rate in cases such as these is said to be in the 90 percent range, so right away there is about a 10 percent chance of an acquittal. All it takes is one recalcitrant juror to prevent conviction, as Rod Blagojevich knows. Perhaps the thinking is that the infamous syringes hoarded by McNamee will not be admitted into evidence, or that McNamee will prove to be an unsympathetic witness.

The flip side is that Andy Pettitte will be brought to the stand by the government, and Andy Pettitte cannot recant his prior sworn testimony that Rocket told him of his PED use, because if he does, he will be the next one brought up on perjury charges. That alone should be enough to persuade Rocket to give it up and get on with his life.

One thing we know: Though The Rocket may ache to tell his story, all legal observers say it would be extraordinarily risky to place him on the witness stand. The Rocket has long been at war with the English language, particularly in the area of syntax. He has always had inordinate difficulty in expressing the thoughts floating around in his head, so much so that I always thought what he needed was a device that translated the words coming out of his mouth into the point he actually wanted to make by having them presented in an electronic message board attached to his stomach.

He was so relentlessly incomprehensible in his Boston prime that our friendly journalistic competitors famously ran his daily quotes verbatim under the heading, “The World According to Roger.’’ We, meanwhile, tried our best to present his thoughts in some sort of edited fashion in the hopes the reader might gain some insight into his thought process. I think the Other Guys probably had the right idea.

Anyway, it’s just not the Rocket’s way to give in or give up. Among the Rocket’s many assets as an elite athlete was a fierce will and never-say-die attitude. The Rocket bulldozed his way through many situations. Some turned out better than others. Surely, that was The Rocket, and not Roger, who showed up wearing the war paint under his eyes for that fateful playoff game in Oakland back in 1990. And there is no question it was The Rocket who threw that sheared bat at Piazza and then denied doing so.

Well, The Rocket wanted his day in court, and now he shall have it. And you have to say the guy has moxie. Roger came into federal court Monday to plead not guilty, which was fine. Then Rocket swaggered out, hopped on a plane, and went to play golf. La-de-da. That Rocket is a piece of work, all right.