Delcarmen dealt to Rockies for prospect 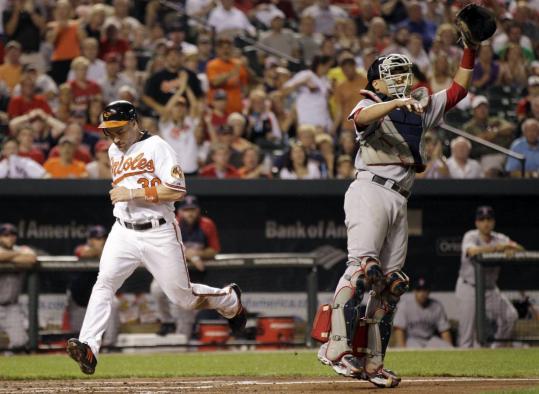 In a move general manager Theo Epstein said does not signal the Red Sox giving up on the season, reliever Manny Delcarmen was sent to Colorado along with cash considerations yesterday for Single A pitcher Chris Balcom-Miller. Instead, said the GM, it was the jettisoning of a pitcher who had fallen down the depth chart in exchange for a starter who might help the Sox in the future. At least, that was the message.

“Manny wasn’t necessarily pitching in the highest-leverage situations any more,’’ Epstein said. “We had a couple guys who had passed him on the depth chart, most recently [Felix] Doubront. We ended up getting a prospect we liked. Manny gets a change of scenery.

“It’s not a reflection of any grander plan. We’re constantly looking for guys we can lean on in high-leverage situations. The way the season evolved, at this point in time, Manny wasn’t one of those guys, so we thought it worthwhile to get an asset that can really help us in the future for what was now becoming a diminishing asset for us.’’

The Sox sent Delcarmen through waivers, and the Rockies claimed him. So the teams worked out a deal for the 28-year-old Boston native, who was drafted by the Sox in the second round in 2000 out of West Roxbury High School. Delcarmen pitched for the club for six seasons and has a career 3.89 ERA.

But Delcarmen’s tenure was marked by inconsistency. Despite the fact that he sometimes had closer-type stuff, he flashed it far too infrequently for the Sox to use him in key situations. In his last four outings, Delcarmen came in with the Sox trailing, including an appearance with the team down by 14 runs against the Blue Jays Aug. 20.

“When he would leave the rubber too quick, there were stretches where he just couldn’t get his arm to catch up on time,’’ manager Terry Francona said. “And he knew it, but he couldn’t make the adjustment during his outing. John Farrell would go out to the mound, and he’d say, ‘Yeah, I know.’

“When everything was working on time, it worked good. But when it wasn’t, it took him a little while to make the adjustment.

“It’s always been the same. When Manny’s delivery is on time, he’s got three good pitches. When it’s not, he’s got a fastball for ball one, and everything’s up.’’

The Sox replaced Delcarmen with a reliever from the minors, Robert Manuel, who was 8-2 with a 1.68 ERA and 12 saves for Pawtucket. Balcom-Miller was assigned to Single A Greenville.

“We pick up a nice future asset, a guy we liked in the draft a lot last year and probably should have taken,’’ Epstein said. “We let him sit on the board a little too long.

“He’s gone out and really performed. We had some recent looks from some scouts. We like his stuff and we like his projectability. We get that asset.

“I don’t think it necessarily takes away from the chances of us doing what we need to do, which is getting extremely hot to get back in this thing.’’

The 21-year-old righthander had a 3.31 ERA in the South Atlantic League and was highly regarded by the Sox’ Northern California scout, Blair Henry, when he was in junior college there. Balcom-Miller was taken by Colorado in the sixth round of the 2009 draft.

“Throws a good downhill fastball with sink,’’ Epstein said. “Had a plus changeup as an amateur. We just saw him again this year with a plus slider. So he’s got potential for three average-to-above-average pitches.’’

Doubront develops
One reason Delcarmen became expendable is the emergence of Doubront, who continues to fill a need, pushing Delcarmen and Hideki Okajima down the depth chart. Despite concerns about whether he would make the transition to relief, Doubront has been promising enough that he might remain in the bullpen for 2011, given that the rotation appears full.

“We like Doubront a lot,’’ Epstein said. “He’s had a really consistent development path through the minors as a starter, and we see him long-term as a starter, but like a lot of starting pitchers, the first stage of his big league career might be as a reliever, especially in this organization.

“We have a full slate of starters coming back. We have some kids we like in the minor leagues, Doubront included. We think he’s a major leaguer at this point. As long as he continues his development, there’s a chance he’s here to stay.’’

Doubront has a 3.12 ERA since joining the team as a member of the bullpen three weeks ago.

Support system
Epstein said he has been texting with first base coach Ron Johnson, who has been given a leave by the club to stay in Tennessee with his daughter, who had her leg amputated after a car accident. Epstein declined to speculate on when Johnson might return, saying, “I’ll leave that to RJ or until he lets us make some sort of public disclosure. His priority is with his family, and that’s an organizational belief, that at times of crisis, family comes first. He’s doing a great job supporting his family through this tough time. They all seem to have a great outlook on everything.’’ . . . Jarrod Saltalamacchia and Eric Patterson will be activated today when rosters expand. The Sox might add another player today, possibly the red-hot Josh Reddick, and then more when Pawtucket’s season ends . . . Dr. George Theodore will examine Jason Varitek and Dustin Pedroia today. The examination won’t be the one that decides whether or not Pedroia has season-ending surgery. The second baseman will also get a CT scan when the team returns home, which will determine the next move. The Sox are waiting on the go-ahead from their medical staff to send Varitek on a rehab assignment. That could happen when the team returns home.
Homing Birds
The last time the Orioles had a winning record at home against the Sox was 1998. Last night’s win ensured they would have one this season . . . Doubront entered in the eighth inning and gave up solo home runs to Luke Scott and Felix Pie . . . Victor Martinez (2 for 4) extended his streak to six games, during which he is hitting .480 . . . The Sox released outfielder Jeremy Hermida. The team decided it would not promote Hermida to the big leagues after rosters expand today. The Sox acquired him last offseason from the Marlins for Jose Alvarez and Hunter Jones. Hermida hit .203 in 52 games this season with five home runs and 27 RBIs. His season was interrupted because of broken ribs sustained in a collision with Adrian Beltre.