THIS STORY HAS BEEN FORMATTED FOR EASY PRINTING
Rangers 7, Red Sox 3

Not a good conclusion to Red Sox’ trip 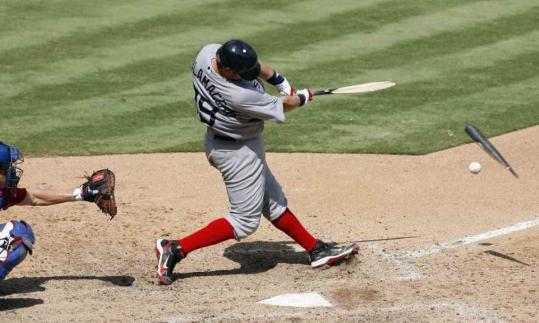 ARLINGTON, Texas — The decision was a bit of a flip-flop. Before the game, when asked about not using Manny Delcarmen Saturday, Red Sox manager Terry Francona said he didn’t want the reliever to face Michael Young and Josh Hamilton, both of whom have hit Delcarmen in the past. So it was curious when, in the seventh inning of yesterday’s game, Francona summoned Delcarmen to face — you guessed it — Young and Hamilton.

Given what transpired, Francona probably should have stuck with his initial instincts. With one run already having scored in the inning on a bunt single against Daisuke Matsuzaka, Delcarmen entered with two men on and Young at the plate and the Sox down by two runs.

Young, the Rangers third baseman, deposited Delcarmen’s first pitch into the center-field bleachers, and a game that was a one-run contest for the first six-plus innings suddenly had become a five-run lead for Texas.

At the time, it seemed Young’s homer merely extended the gap in an easy win. In the end, though, it proved to be the difference, as the Sox fell, 7-3, at Rangers Ballpark.

“Just wish we had a rewind button,’’ Delcarmen said.

With two outs in the top of the eighth, Eric Patterson hit an infield single, knocking Texas starter C.J. Wilson out of the game. After Patterson took second base on defensive indifference and third on a wild pitch by Pedro Strop, Marco Scutaro drove him in with a double, the Sox’ first run of the game.

Then Darnell McDonald hit his first home run since July 11, a two-run shot that cleared the wall in right field. The deficit was down to 5-3, but the Sox couldn’t come all the way back, and the Rangers added two more runs in the eighth.

Before the game, Francona said of Delcarmen, “He hasn’t gotten Hamilton [2 for 5 lifetime, two doubles] or Michael Young [3 for 8, double] out. So you’re asking a guy to come in to get two guys that he hasn’t gotten out. That’s probably not a good move on my part.’’

But he made the move yesterday, and all it took was one changeup for Young to change the game. Francona said the difference between Saturday and yesterday was that the Sox were losing, though he still wasn’t entirely happy with his decision.

“I just hung a changeup,’’ Delcarmen said. “Going in, I know he’s a first-pitch-swing guy. With runners on, it’s not the right time to hang a changeup.

“It’s a little frustrating. We end up scoring three in the very next inning, so it kind of stung a little bit. Dice was battling the heat all day and pitched his butt off.’’

Other than a run in the second — on a single, walk, sacrifice bunt, and sacrifice fly — Matsuzaka contained a dangerous Rangers team over the first six innings. He finished with eight strikeouts and only two walks.

He only ran into real trouble in the seventh, when Mitch Moreland led off with a single, moved to second on a bunt, third on a ground out, and scored on a Julio Borbon bunt single to the right of the mound. As second baseman Bill Hall said, “That’s a perfect play . . . He laid down a perfect bunt, and in that tall grass we had no shot. Great bunt in a great situation.’’

Matsuzaka, meanwhile, was efficient, even if he said he had perhaps his worst fastball and cutter of the season and had to rely more on his breaking pitches.

“The problem wasn’t Dice,’’ Francona said. “It was the way their guy was throwing.

“Phenomenal stuff. Lefties are pretty much almost nonexistent against him. Tremendous.’’

Wilson didn’t even record a fly out until Hall sent a ball to center field to begin the eighth inning.

“He was moving the ball in and out, changing speeds,’’ McDonald said. “He’s a good pitcher. The biggest thing is just that he’s able to cut the ball in. He has a good two-seamer. He keeps you off balance.’’

The Sox finished their 10-game road trip with a 5-5 record. They remain six games behind in the AL East as the Yankees lost, but they are five games behind the Rays in the wild-card race.

“Satisfied? No.’’ Hall said when asked about the trip. “We had an opportunity to have a better record than this going home.

“We’re having a tough time getting over that hump right now and just continuing the hot streaks that we start . . . we don’t really finish them off. That’s been a problem. Hopefully the homestand will ignite a little something.’’