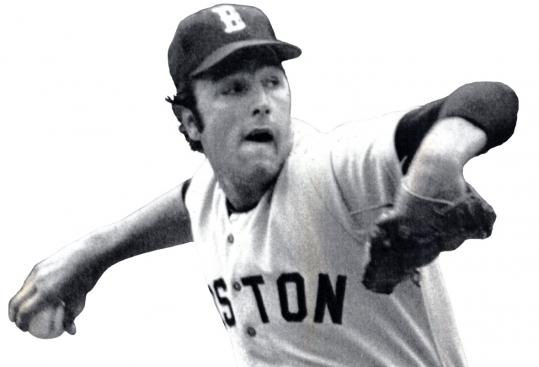 NEWINGTON, N.H. — His ballpark is a low-slung yellow concrete building, adjacent to a martial arts emporium, next to a strip mall. His uniform consists of a white cap, blue T-shirt, white cargo shorts, low-cut white socks, and white sneakers. His pitcher’s mound is on a dirt incline with no rubber to toe. Home plate is an imprint of the real thing etched into artificial green turf, like a tee box at a driving range. His two-seam fastball is a pantomime. And his audience is one 14-year-old.

But 21 years after he last threw his patented sinker in the major leagues, a generation and a world removed from Fenway Park, Bob Stanley, 55, is still pitching.

And catching, for that matter. And observing, constantly observing.

A little bit of everything is Stanley’s job description at the USA Training Centers, a high-level baseball academy outside Portsmouth. A member of the Red Sox Hall of Fame and one of the most versatile pitchers in club history — a starter/reliever who was one of the few big leaguers ever to both win and save 100 games — Stanley is now a high-priced tutor/pitching coach.

After his career, pocked by one infamous wild pitch in Game 6 of the 1986 World Series, Stanley spent a dozen years as a minor league pitching coach in the Mets and Giants systems. That came to an end in 2008 when he was asked to move his base of operations from Connecticut.

“They wanted me to go to Augusta, Ga.,’’ he says. “There’s nothing in Augusta except the Masters — and we’d be on the road for that.’’

So this is a pleasurable alternative.

And non-kids. His pupils, who pay $55 a pop ($50 for members) for a half-hour of private instruction, have ranged in age from 8 to a onetime student of 52. “He was pretty good, too,’’ says Stanley.

He also finds that his new calling is blessedly free of front-office second-guessing.

What he does get, beyond top dollar, is apparent satisfaction. He also serves as pitching coach for USA’s top-level AAU team, which plays on its own field in Somersworth, built by the centers’ owners. He gives clinics, helps out at camps, and if you can sign up enough of your friends, he’ll even come to your door — or at least your home field, USA’s version of a road trip.

But his first love is private instruction.

Such as exhaustion. Stanley estimates that during his busy season, from September to April, he gives 800 lessons. In March alone, he gave 55 a week. During the summer, the schedule tapers off as players focus on their league seasons. But that doesn’t mean Stanley has carte blanche to indulge his other passion, golf.

On this early August morning, Stanley has two lessons scheduled, at 10 and 11. So he thinks. His employers have booked two other sessions, one squeezed in at 10:30 and another added at 11:30. Stanley accepts the extra assignments with a shrug and a smile.

Which is his approach to tutoring. His lessons are intense, precise. But his demeanor is low-key, good-humored. He cajoles with a laugh: “Don’t watch your feet. You know how ugly they are.’’

The recipient of this instruction is 15-year-old Tyler Prescott, who is up from Alpharetta, Ga., visiting his grandparents in Exeter, and for the second year in a row includes a tuneup with Stanley on his vacation agenda.

Stanley hasn’t seen the teen since last summer. But when he enters the lobby from the staff room, he bellows, “Hey, it’s the Georgia Connection!’’ and Prescott is immediately at ease.

He’s one of the more advanced students, and Stanley spends the half-hour catching an assortment of pitches and calling out instructions. This is his one regret of the morning.

“I usually only catch for the Little Leaguers,’’ he says, wringing his hand. “I forgot how old this kid was. I prefer it when I have a catcher.’’

So he’s particularly grateful when his next two pupils, 14-year-old Wade Belanger of Lee and 9-year-old Jeremy Wood of Dover, bring their own catchers. With these two, Stanley’s role is more hands-on. After watching them intently, he shows them how to grip various pitches — but not the sinker, not yet. “That’s for later,’’ he says.

The kids seem appreciative. “He’s pretty nice and he seems to be pretty smart on the topic. Well, of course he would be,’’ says Belanger, who can see improvement after 30 minutes in the cage. “I was able to throw more accurately and harder.’’

For the most part, his students had no idea who Stanley was when they signed up, his career having spanned their parents’ heyday, 1977 to ’89. But Mom and Dad are well aware of his big league pedigree. “How could you not be?’’ says Wood’s father, James. And so their offspring wind up here, hoping to absorb a thing or two by osmosis, if nothing else.

Besides baseball and golf, Stanley is heavily involved with the Jimmy Fund, an association he began during his career, and includes a sad irony.

“When I was playing, I met a young boy who passed away,’’ he says. “Five years later, my son had the same tumor.’’

Kyle Stanley was 9 when his sinus cancer was diagnosed, but he has just celebrated a milestone — “20 years cancer-free,’’ says his father.

Kyle is now 29, one of Stanley’s three grown children, along with daughters Kristin and Kerri, both of whom got married in the past year.

They are part of the reason — actually, their absence is part of the reason — Stanley and his wife of 33 years, Joan, now live in a condo in Stratham after spending 25 years in a house in Wenham, Mass. “We wanted to downsize,’’ says Stanley. “And I was still coaching, so I wanted a turn-the-key place where everything was taken care of. Then a year later, I was out of coaching.’’

He says he has no desire to return to coaching, to the 13-hour bus rides and extended time away from home that are part of minor league life. It may have been different several years ago when he inquired about becoming a coach in the Red Sox organization “a couple of times. But they had nothing available.’’

Nor is he wistful about playing. He quit, says Stanley, “because I told my wife I wouldn’t keep playing when the game wasn’t fun anymore. I’d never play just for the money. And I was entering my option year.’’ He passed up a potential $1 million by retiring. But he doesn’t lament the move.

Besides, says Stanley, scanning the makeshift diamond that is his office these days, “I like this just fine.’’