Looking good, until reality sweeps in 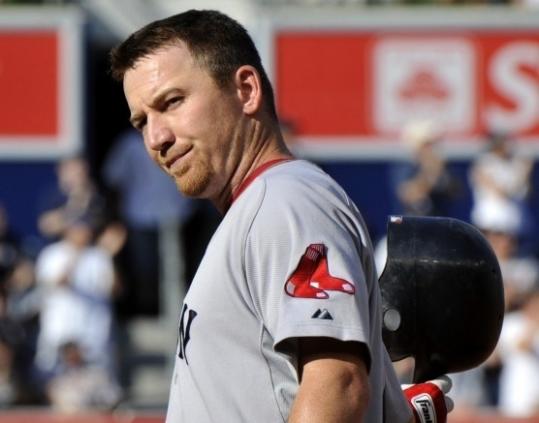 NEW YORK — The planets were aligned. The Rays had already lost their fourth straight game and the Red Sox were riding high after a nifty Friday night victory. Alex Rodriguez was bounced from the lineup by one of his own guys during batting practice. The Sox were poised to beat the Yankees again yesterday and pull within four games of first place. They haven’t been closer than 4 1/2 since July 6.

For a few moments, thoughts of a Bronx sweep were dancing in the bobbled heads of citizens of Red Sox Nation.

All those happy themes were reinforced when the Sox bolted to a 2-0 lead against CC Sabathia in the second inning. The Sox finally were going to take off, and they were going to do it by sweeping the Yankees in their own ballpark.

This was going to be payback for 2006 (when the Yankees swept five at Fenway) and the Boston Massacre of 1978 (Yankees outscore Sox, 42-9, over four games).

But then reality got in the way. We again were reminded that this is 2010 and something always stops the Sox.

Sabathia is a better pitcher than John Lackey; David Ortiz still can’t hit lefties (three strikeouts and a double play grounder); it’s still too easy to steal on the Sox; and manager Terry Francona has no options for middle relief.

We watched Lackey (who keeps reminding us that he didn’t pitch that badly) surrender five runs, eight hits, and three walks over six innings of a 5-2 loss to the first-place Bronx Bombers. So much for the sweep. Now it’s just two more days off the schedule as we wait for the surge that may never come.

John Henry says it will take a miracle to get into the playoffs for the seventh time in eight years.

“After April, all of the injuries — which continue daily, the 2010 schedule and having fallen as far back as we did coming into NYC for four — it would take a miracle to make the playoffs,’’ the nocturnal owner wrote in an e-mail at 1:38 yesterday morning. “But we saw miracle comebacks in 2004 & 2007 and we have a rotation that could help us get on a roll. Miracles happen.’’

A sweep here would have been Al Michaels miraculous. But it was possible. With a win Friday night and a 2-0 lead yesterday, it was easy to fast-forward to a 4-0 weekend.

Not so fast. The Yankees reached Lackey for a pair in the second, two in the fifth, and one in the sixth.

“It’s not like 2-0 means we’re going to win the game,’’ said Mike Lowell, who had one of Boston’s six hits (RBI double) off Sabathia. “They’re a good team. They’ve got the best record in baseball.

“But we’ve still got two games left in this series and Josh [Beckett] brings that pedigree of a No. 1 guy. Let’s see what we can do. We know we still have the ability. We have a chance.’’

The pitching matchups for Games 3 and 4 favor Boston.

Beckett, tonight’s starter, looks to be getting into 2007 form. Time on the disabled list can be beneficial to starting pitchers. Remember 1986? Roger Clemens went 24-4 and won the Most Valuable Player award. Bruce Hurst was a pedestrian 13-8 but missed a month and a half in the middle because of a groin pull. When October rolled around, Clemens was tired while Hurst was dominant. That’s what the Sox would like to see from a well-rested Beckett.

The Yankees’ A.J. Burnett, meanwhile, often looks like a super talent with confidence issues. He’s a guy you never want in the big game.

Tomorrow afternoon (2:05, the fourth different starting time in four games), it’ll be Jon Lester vs. Dustin Moseley. You’ve got to like the Sox in that one even though Lester hasn’t won since the All-Star break. Boston’s power lefty is due.

Bolstering Boston’s case to overtake the Yankees, we had the weird injury to Rodriguez.

A-Rod was taking grounders at third base during batting practice, shooting the breeze with Fox’s Joe Buck (don’t you love that detail?), when Lance Berkman hit a liner off Rodriguez’s left shin. Poor Berkman. He is 2 for 22 since joining the Yankees, fans are booing him, and he knocked his 600-homer teammate out of the lineup.

X-rays were negative, but A-Rod is day-to-day.

“Now we’re getting some of the stuff that Boston’s been getting all year,’’ said Yankees general manager Brian Cashman.

Too bad the Sox failed to capitalize.

As always, Francona downplayed the magnitude of the matchup.

“I swear to you, I don’t circle the Yankees series,’’ said the manager. “We just play.’’

And we just watch. And for a few moments, we were starting to believe again.