If surgery is needed, first baseman’s season is over 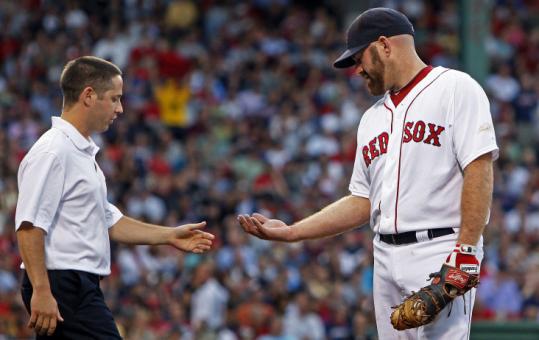 There was a hole in the Red Sox lineup yesterday, one that might be as damaging as any they have had to endure in a season already shocking in the number and severity of injuries it has brought. First baseman Kevin Youkilis went on the disabled list because of a torn adductor muscle in his right thumb, as the Sox’ list of wounded continued to grow.

Along with the broken foot suffered by Dustin Pedroia, the injury to Youkilis just might be the most problematic of this campaign for the Sox. And things could get worse, as it could keep him out for the remainder of the season.

Youkilis, who ruptured the muscle on a swing in Monday night’s game against Cleveland, was headed for a second opinion today, and if he has to have surgery, it realistically would mean an end to his season, according to general manager Theo Epstein.

That’s the last thing the Sox wanted to hear, as they are heading into a key weekend series with the Yankees attempting to maintain relevance in the American League East.

“It’s baseball, and injuries are a part of the game,’’ Epstein said. “I feel like we’ve had more than our fair share, but no one’s going to feel sorry for us. We need to find a way to win, regardless.

“We’re just going to continue to do the best with what we have. I still feel like we put a good team on the field every night, and I feel like we have enough talent to get as hot as we’re going to need to get to do damage in this division.’’

The Sox hope to have more information on the Youkilis injury in the next few days, as he will head to at least one specialist. As manager Terry Francona said, “It was kind of unclear and there’s still some gray area involved here. Even the doctors, Dr. [Thomas] Gill and Dr. [Matthew] Leibman talked, and they’re searching for some answers.’’

“It’s misfortune, but I think for me personally I’ve been very fortunate with my health for a long time. I can’t get too upset because I’ve been very fortunate. I wish I could help the team out as much as I can. It’s one of those things; luckily it’s not a career-ending [injury]. I’ll still be able to play, just not right now.’’

Youkilis was wearing a white plastic splint on the hand after last night’s game. He said there was no particular event that precipitated the injury, which he started feeling when the team was on the West Coast. He said there was swelling and the area was tender to the touch, but it worsened Monday, when the area turned blue.

Youkilis said the tendon was not affected, which is a positive. When asked how many athletes have had such an injury, Youkilis said, “Zero.’’

Youkilis met with Leibman, a hand specialist, after yesterday’s MRI, and was replaced on the roster by Mike Lowell, who started at first base against the Indians. Though Lowell homered in his first at-bat last night, the Sox will be missing a significant middle-of-the-order bat in Youkilis.

The injury indeed is a rare one for an athlete. In fact, it’s so rare that Dr. Andrew L. Terrono, chief of hand surgery at New England Baptist Hospital, doesn’t think he’s seen this in the 25 years he has specialized in hand surgery.

“It’s a very unusual injury,’’ Epstein said. “It’s not a common occurrence for hitters to have this. There’s two heads on the muscle, two main parts of the muscle, and one of them has ruptured.

“I guess that’s the good news. The bad news is everything else. We’re going to wait and see.’’

“In the meantime,’’ said Francona, “there’s no way we’re going to let him play and take a swing and hurt his career. If he did some damage and pulled that muscle off the bone, then you’re looking at a surgery that’s very difficult.

“If this led to surgery now, it’s certainly fixable. We don’t want to get into an area where we do something that becomes career-threatening.’’

“If it’s partially torn, it could be healed without surgery,’’ said Terrono, who has operated on Celtics players Glen Davis and Tony Allen but has no direct knowledge of Youkilis’s injury and was speaking only about information released publicly by the Sox. “A lot of it depends on where it’s torn . . . and how much of a gap is between the two ends of the tear. If it’s partially torn, you usually don’t do anything for it but immobilize it and put it in a cast.’’

Terrono said he believed it would be at least six weeks before someone with such an injury could return to action, but he also said it was difficult to pinpoint that, given that he has not examined Youkilis.

Added Dr. George Kasparyan, director of hand surgery for the Lahey Clinic, who also has not seen Youkilis’s injury, “I understand why they are being conservative and careful. If he theoretically continued to play, he could further injure it and it would turn into a chronic problem where the tissue is less amenable to repair. We call it attritional; the tissue becomes thinner and thinner and the tissue loses its integrity and its repairability.’’

With Youkilis out for at least two weeks, and possibly the season, that makes 15 players the Sox have placed on the DL, including five members of the Opening Day lineup and three members of the starting rotation. Epstein said the Sox could explore a waiver trade for a first baseman, depending on the “extent of the injury and duration of his absence.’’

“This hurts,’’ Epstein said, “especially with Jacoby [Ellsbury] coming back in the next day or two, most likely. It just feels like we can’t have our full team on the field.

“But that’s nothing new for this group this year, and we have to continue to find a way to battle through it. We’ve been looking forward to getting our full complement of players back so we can get really hot and get back to where we want to be.

Kay Lazar of the Globe staff contributed to this report.