This situation at critical mass 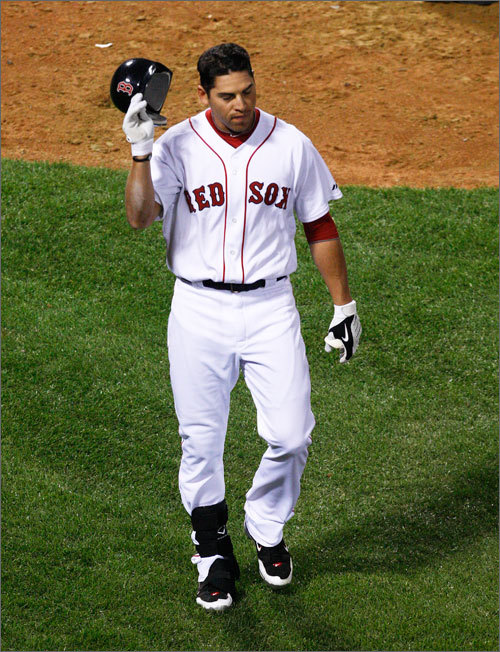 It’s impossible and unfair to measure another man’s pain. Some professional ballplayers play hurt, while others wait until they are 100 percent before they step on the field. Jacoby Ellsbury broke five ribs back in April and he’s the only person who knows the extent of his pain at this hour.

But the situation with the Red Sox and Ellsbury has become absurd. The Sox are falling fast against mediocre competition and Ellsbury is still on the disabled list even though he’s played five games of minor league ball, and Sunday went 2 for 5, almost jumping out of McCoy Stadium in pursuit of a Durham Bull home run.

It was hard to watch the Sox’ 6-5 loss to the moribund Indians last night. They started Eric Patterson in center and Ryan Kalish in left. Mike Cameron, who has played all season with an abdominal muscle tear, was mercifully placed on the disabled list, and Daniel Nava was recalled from Pawtucket. Kevin Youkilis went to the bench after hurting his thumb in the second inning. Victor Martinez replaced Youkilis at first base and Kevin Cash came in to catch.

Meanwhile, Ellsbury sat with his teammates in the dugout, still unable to play. It was not unlike that July night in 2004 when Nomar Garciaparra sat and stewed while Derek Jeter dived into the stands and the Yankees beat the Red Sox in extra innings. That was the night it was clear the Sox had to trade Nomar and that’s the way it feels with Ellsbury now. Too bad. Ellsbury’s an amazing talent, a 26-year-old center fielder who stole 70 bases last year and has a lifetime batting average of .297.

This standoff of 2010 is at critical mass. The Red Sox aren’t going to call him out publicly, but the organization and Ellsbury’s teammates simply have to be fed up.

Martinez, Jason Varitek, and Dustin Pedroia stayed with their teammates after they broke bones. Ellsbury went to Athletes’ Performance Institute in Arizona. Martinez vaulted right into the lineup when his broken thumb improved. Varitek and Pedroia plan to do the same thing.

Ellsbury went to Fort Myers to resume baseball activities. Then he played three games in the Gulf Coast Rookie League. Over the weekend he resumed his rehab assignment in Pawtucket. Sunday he almost vaulted over the center-field fence in pursuit of a homer by Chris Richard.

“It looked like it was 10 feet over his head,’’ gushed Pawtucket manager Torey Lovullo. “When you make moves like that, and you’re talking about agility and strength, and reading the ball — and you see plays like that — it’s very satisfying. He’s ready.’’

Apparently not. Ellsbury came to Fenway last night but was not ready. He is scheduled to play for Pawtucket again today. Meanwhile, the wounded Sox are sinking in the American League East.

When he spoke to reporters in Pawtucket Sunday Ellsbury said he felt better, but “it’s always been that rotational thing . . . swinging.’’

Sox manager Terry Francona is understandably sensitive about this situation. Francona has done his best to say good things about his player. Francona’s longstanding magic has been his ability to have his players go through walls for him. He will not give them up. He bristles at any suggestion that he is unhappy with any of his players. Some of us think he’s speaking in code when he talks about guys like Pedroia and Cameron playing in pain and doing anything to get on the field. The manager doesn’t like us putting words in his mouth so we won’t do that here. You make the judgment.

Asked about Ellsbury’s non-availability before last night’s game, Francona said, “We’re kind of walking that line where we know potentially what he can mean to us, but he still feels it at times, so we’re trying not to get caught up in . . . activating a guy before he’s ready.’’ Approached by reporters after last night’s loss, Ellsbury said, “I’m going to be feeling something for the rest of the year,’’ then indicated he had nothing else to say.

It’s not fair for any of us to guess how much pain he’s feeling, but this is tough to stomach in a town with a slot receiver who is back on the field six months after reconstructive knee surgery.

Many fans and folks in the Sox organization are disgusted by how this has unfolded. Fair or unfair, there’s a perception that Ellsbury won’t play hurt and that he’s punishing the club for moving him from center to left, and for misdiagnosing his injuries in April.

I spoke to his agent about this last week and Scott Boras denied it, saying, “I’ve not heard that from anyone. Jacoby Ellsbury is a gamer. He illustrated that by coming back and playing with broken ribs [vs. Kansas City in May]. Cooperation with the Red Sox has been excellent. I can’t dictate how fans and journalists think, but it’s certainly in Jacoby’s interest to play as much as he can.’’

One would think so. That’s why it seemed ridiculous that Ellsbury was sitting on the bench last night, watching Eric Patterson, Ryan Kalish, and Daniel Nava play in the outfield as the Sox were edged by the Tribe.

There is damage being done and it will be hard to repair.

Late last night, as Ellsbury was packing for his return to Pawtucket, 6-year-old D’Angelo Ortiz walked by and said, “Jacoby, when are you gonna play?’’

Peter Abraham of the Globe Staff contributed to this column.