THIS STORY HAS BEEN FORMATTED FOR EASY PRINTING
Red Sox 4, Tigers 3

For second straight game, Sox stride past Tigers in the ninth 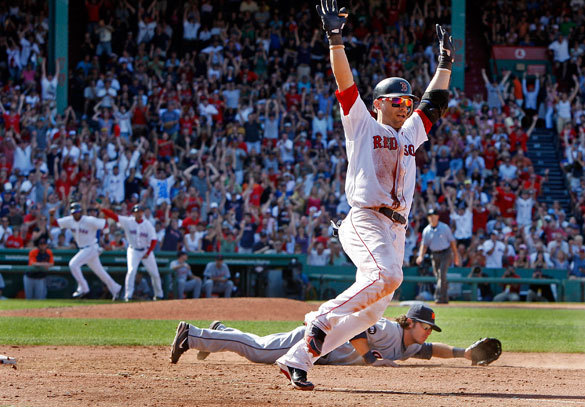 (Jim Davis/Globe Staff) Marco Scutaro celebrates as he sees the throw to first base by Tigers pitcher Robbie Weinhardt (not pictured) sail by the sprawling Will Rymes.
By Nick Cafardo Globe Staff / August 2, 2010

Wins don’t always come with a pretty bow on top. It almost happened yesterday at Fenway Park, with the Red Sox’ Clay Buchholz outdueling the Tigers’ Justin Verlander, Buchholz not allowing a run through eight innings. But then Jonathan Papelbon happened.

Papelbon blew a 3-0 lead in the ninth inning, costing Buchholz his 12th win, only to have the Sox pull out a 4-3 win in their half of the ninth, with pinch runner Darnell McDonald scoring on an errant throw to first base by pitcher Robbie Weinhardt after he fielded Marco Scutaro’s perfect bunt single toward third.

The Red Sox won two of three against the Tigers and remained relevant in at least the American League wild-card race.

If a healthy and above-average starting staff is what will keep the Red Sox afloat, then Buchholz did more than his part yesterday, allowing only three hits in eight-plus innings.

But in the ninth, Buchholz gave up an infield hit to Will Rhymes. The ball took a weird hop on second baseman Jed Lowrie at the lip of the infield, and he couldn’t corral it.

After Buchholz walked Ryan Raburn, manager Terry Francona bounced out of the dugout to take Buchholz out, with his pitch count at 109, in favor of Papelbon.

Triple Crown candidate Miguel Cabrera smacked a long double to the top of the left-center-field wall, scoring both runners.

“It’s exactly what I wanted to throw,’’ Papelbon said of the Cabrera at-bat. “I shook off the heater away and got it up and in. He bailed out a little bit, looking in a little bit more than I expected. He’s hitting pitchers’ pitches. Not much you can do about it.’’

After Papelbon got Brennan Boesch to strike out, newly acquired third baseman Jhonny Peralta stung a single to center, tying the game and sending panic through the stands.

Papelbon was upset that he blew it for Buchholz, who was charged with two runs, snapping a 14 1/3-inning scoreless streak, as his ERA went to 2.68.

“Clay has been one of the best pitchers in the game this year. As a closer you want to protect those wins for your starters, and you take pride in it. It stings a little bit because you know that that’s what they work for, those wins,’’ Papelbon said.

Buchholz, who hadn’t appeared happy at being pulled, did give a pat on the behind to Papelbon when he got back to the dugout.

No worries, though. With Tigers closer Jose Valverde unavailable after his long adventure Friday, it bit the Tigers in the ninth Saturday and again yesterday.

After Lowrie beat out an hit down the line at third and was run for by McDonald, Eric Patterson came up to bunt, but lefty Brad Thomas couldn’t throw a strike. Well, three of them looked like strikes, but umpire Dale Scott saw four straight balls and Patterson took his base.

The Tigers weren’t happy, during the at-bat, immediately after it, and in the clubhouse later on.

“You’re out there to do your job and get the bunt down, but it’s a Catch-22 situation,’’ Patterson said. “I didn’t see anything that looked like a strike, so I didn’t bunt. My job is to move the runners over, and that’s what ultimately happened. Not the way we drew it up, but it did the job.’’

Weinhardt came on, and the plan was for Scutaro to bunt the runners over. Had that happened, the Tigers probably would have walked J.D. Drew and pitched to Kevin Youkilis with the bases loaded. It never got that far.

Scutaro’s bunt was perfectly placed, forcing Weinhardt into a quick throw. He threw it wide of Rhymes covering at first, pulling him off the bag as the ball skittered into short right field, allowing McDonald to score.

“I just needed to get the bunt down and move the runners,’’ Scutaro said. “Sometimes when you do the job like that you have no idea what might happen because you’ve got to field the ball and make the play. It’s nice to win any way, and it was a game we needed to win because we had the lead most of the way. You don’t want to lose a game like that.

“And now we win the series, and that’s what we need to keep doing the rest of the way — win series and just see where we are at the end.’’

The Sox scored a run in the second when Adrian Beltre reached on an infield single, Lowrie singled to center, moving Beltre to third, and Patterson hit an single to left. Patterson was not originally in the lineup; he replaced McDonald, who had lower back spasms but worked them out in time to score the winning run.

Three runs against Verlander was quite an accomplishment on a sunny day when the Tigers starter’s 98-mile-per-hour heater was hard to locate at times. Verlander allowed nine of the first 17 Sox batters to reach (six hits and three walks) before retiring the last 13 batters he faced.

But Buchholz, who has pitched at least eight innings four times this year, surpassed him. Though he walked four, he struck out five. A one-out Peralta double in the fifth was as much trouble as Buchholz found himself in until the ninth.

Yes, Buchholz should have breezed to his 12th victory. But in this case it wasn’t the beauty of the outside of the package. It was all about what was inside it — a win.