THIS STORY HAS BEEN FORMATTED FOR EASY PRINTING
A's 5, Red Sox 4 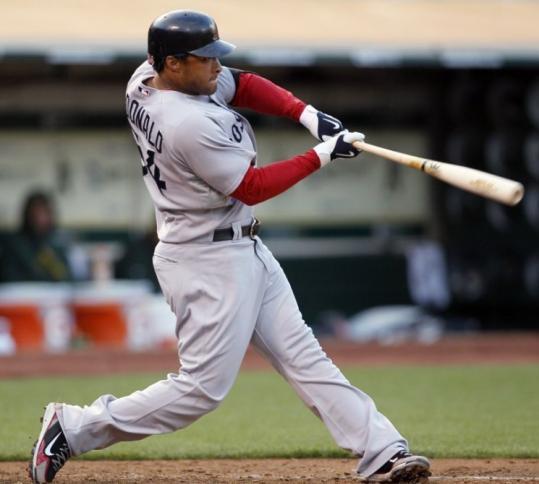 OAKLAND, Calif. — None of the screaming made a difference in the end. None of the expletives and anger changed the outcome of the game, though it certainly livened up a 3-hour-30-minute game that made it all the way to the 10th inning. That is where the game stood when plate umpire Bob Davidson made a series of controversial decisions, with one crucial in the game’s outcome.

That was the balk call on Ramon Ramirez, which sent Daric Barton (who singled) to second with one out and Kurt at the plate. The call, which clearly angered the Sox, began a series of moves that left Michael Bowden facing Kevin Kouzmanoff with two outs and men on first and second.

And Bowden, the newly converted reliever, didn’t deliver. Instead, Kouzmanoff dunked a game-winning single into right field, which gave the A’s a 5-4 victory and left the Sox 3-8 in extra innings.

But that was hardly the whole story of the inning.

Coco Crisp started it by arguing a balls-and-strikes call with Davidson that left the former Sox center fielder ejected and needing to be restrained, although that didn’t really affect the outcome. The balk call, on the other hand, did.

“It was interpreted by Bob Davidson as a balk,’’ pitching coach John Farrell said. Asked if he saw it that way, Farrell said, “In real time? No. With the benefit of hindsight? Apparently he saw something that was not consistent with his other set position.’’

Manager Terry Francona said, “I didn’t see it. He saw something that nobody else in our dugout saw. Can’t get him to reverse it.’’

So with Barton moving to second, Ramirez intentionally walked Suzuki to set up the force. Then, when Dustin Richardson was brought in to face pinch-hitter Adam Rosales, Davidson provided some more moments. On a 2-and-2 pitch, Davidson ruled Rosales had not gone around on a check swing. That decision didn’t sit well with the Sox, with Farrell offering some choice words from the dugout. He was tossed, too.

“I saw a pretty full swing,’’ Farrell said. “Obviously there was a differing of opinions.’’

On came Bowden, with the Sox hoping to save Scott Atchison for today’s game, unwilling to bring in closer Jonathan Papelbon in a tie game on the road.

“Had [Bowden] not performed the way he did out of the bullpen in Pawtucket, we probably wouldn’t see him here,’’ Farrell said. “But he’s been very solid out of the pen. He’s come in, he’s thrown strikes. He’s had some swing-and-misses, which he showed in the at-bat to Kouzmanoff. His overall development has been not only positive, but it’s been consistent in that role, and to the point where we don’t have any hesitation to use him in a tight spot like that tonight.’’

Bowden had a 1-2-3 inning in his first appearance out of the bullpen for the Sox this season, but he couldn’t come through against Kouzmanoff, who got the hit on a 2-and-2 fastball.

The Sox did not take advantage of losses by both the Yankees and the Rays, leaving the Sox six games back in the AL East. The team has dropped nine of 13, and has lost 14 of 20 at Oakland-Alameda County Coliseum.

That was partially the fault of the offense, which left 12 men on base, including leaving the bases loaded in both the fifth and sixth innings. After scoring a run in the first inning on an RBI double by Kevin Youkilis and adding three in the second, the Sox didn’t score again. In the second, the Sox were helped by an error from Suzuki, who nearly caught Bill Hall off first, but threw the ball into the outfield. That brought Mike Cameron home, and kept Boston in the inning, as Marco Scutaro and Darnell McDonald hit back-to-back RBI doubles.

But, instead of closing the door on the A’s, Tim Wakefield (6 innings, 3 hits, 4 runs) blew the lead in the third. That inning was helped along by Wakefield and catcher Kevin Cash, who combined to aid Oakland’s rally. After Crisp doubled with one out, Wakefield donated a walk, Cash gave up a double steal, then Wakefield hit a batter. The bases were loaded for designated hitter Jack Cust, who doubled past J.D. Drew in right to score two runs.

Not that the Red Sox were done with the miscues. With Kouzmanoff batting, Cash allowed a passed ball that scored another run, followed by the A’s third baseman hitting a sacrifice fly to center, tying it at 4-4.

“[Wakefield] was good, his knuckleball moved all over the place,’’ Francona said. “We had one really tough inning. When Wake pitches, you’rew going to see stolen bases, passed balls, that’s the way that knuckleball works, and it ended up adding up to four runs.’’

Wakefield settled down to get the final 11 batters he faced. That streak was picked up by relievers Manny Delcarmen and Hideki Okajima, who set down five straight before Suzuki singled with two outs in the eighth, the first Oakland hit since the third inning.

“Just one inning, bad luck, things happen,’’ said Wakefield, who is likely to be the odd man out when Josh Beckett returns to the rotation Friday.

“[Wakefield] had some good movement to my glove side tonight,’’ Cash said. “He pictched a hell of a ballgame, kept us right in the ballgame. His knuckleball was very good. He had some tough elements with the wind and stuff like that. I think people don’t realize when it’s windy like that, it makes it tough for him to keep it in the zone. For the most part he was able to do that.’’

“The disappointment is we lost the game,’’ Cameron said. “We had a chance to pick up some ground and we didn’t. We’ve got to try to come back out and try to capitalize on some of the mistakes we made.’’