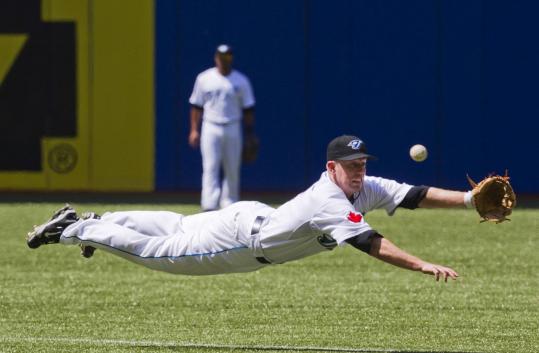 Blue Jays second baseman Aaron Hill dives for but misses a ball hit by the Red Sox’ Bill Hall in the seventh inning, which went for a single. (Mark Blinch/Reuters)
By Peter Abraham Globe Staff / July 12, 2010

TORONTO — Adrian Beltre is headed to the All-Star Game. Whether he plays has not been determined.

The third baseman suffered what the Red Sox described as a strained left hamstring while running out a ground ball in the fifth inning of yesterday’s 3-2 victory over Toronto.

He stayed in the game for the bottom of the inning then was taken out.

“Hopefully it’s more of a cramp. That would be the hope. He didn’t want to come out,’’ manager Terry Francona said. “Once we got the lead he kind of relented.

“We’ll check him out. Obviously with the three days off and him going to the All-Star Game, we’ll stay with him daily. He’ll check in every day and [we’ll] see how he’s doing.’’

Beltre thought the injury was serious at first. But his condition improved quickly once he got off his feet.

“It’s tough to tell because I thought it was going to be worse,’’ he said. “It felt like something was going to pop, and every time I curled my legs I got a cramp on it. Hopefully tomorrow it feels better.’’

The Sox would move to exclude Beltre from playing if they feel there is any danger of his becoming more injured. After being selected to the All-Star team for the first time, Beltre is eager to participate. He is hitting .330 with 13 home runs and 55 RBIs.

Beltre said he would not take any unnecessary risks.

“If I don’t feel good, I won’t play,’’ he said. “It’s the All-Star Game, but I don’t want to screw up the season for a couple at-bats in an exhibition game. I’ll be cautious on that.’’

The Sox already have 11 players on the disabled list. When Beltre came out of the game, second baseman Bill Hall moved to third and Eric Patterson came in to play second.

It was the first time Hall has played third base this season. The only positions he has yet to play are catcher and first base.

Cameron sits out
Center fielder Mike Cameron did not play because of a sore right wrist, the result of being hit by a pitch by Brandon Morrow in the third inning Saturday.

X-rays were negative, but Cameron was sore enough to be replaced in the lineup by Darnell McDonald.

“I’m fine,’’ said Cameron, who demonstrated that by flexing his wrist. “I have enough meat there. It’s just a bruise.’’

Players scatter
The players fled in different directions after the game. Some took the team charter back to Boston, others flew directly to their homes or some other spot.

Those players headed for the All-Star Game boarded a private jet for the trip to California.

Francona scheduled an optional workout for Wednesday at 6 p.m. at Fenway Park.

“It’s not a test to see who shows up,’’ he said. “We really do want them to get away. There’s certain guys, especially the pitchers, who need to come in and throw. We’ll be in there for them. But we want guys to get away, it’s good for them.’’

Daniel Nava flew directly to Nashville to hang out with a friend and catch some music. Scott Atchison and his family plan to see some of Cape Cod. Cameron will spend time with his family at their home in Georgia.

First base coach Ron Johnson left the clubhouse wearing a cowboy hat. His next stop was his farm in Tennessee.

They’ll see Lee
The Sox will face new Rangers ace Cliff Lee Saturday at Fenway. Texas set its rotation for the series yesterday. Tommy Hunter will start the first game, followed by Colby Lewis, Lee, and C.J. Wilson. The Sox announced earlier that their rotation out of the break would be Tim Wakefield, Clay Buchholz, John Lackey, and Jon Lester against Texas, with Daisuke Matsuzaka facing Oakland July 19 . . . Manny Delcarmen, on the DL with a sore right forearm, threw in the bullpen before the game and felt fine. He could be activated as soon as Thursday. “I hope so. Everything feels great,’’ he said . . . The Red Sox improved to 9-14 in day games. Francona said beforehand that he had no idea why the team has played poorly in such games. “I just know we need to start winning more of them,’’ he said . . . The Red Sox are 7-2 against Toronto this season.