Konerko is picked as a Star over Youkilis 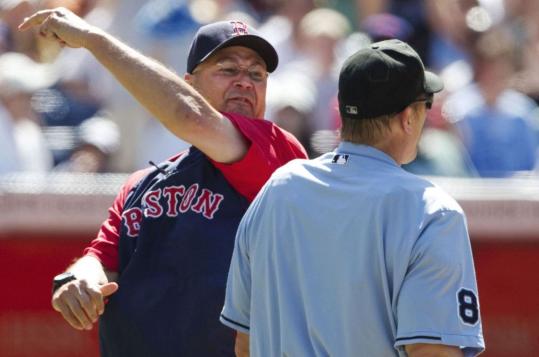 TORONTO — Minnesota’s Justin Morneau, voted in as the starter at first base for the American League, pulled out of the All-Star Game yesterday because of a concussion.

But Yankees manager Joe Girardi, the AL skipper by virtue of winning the World Series last season, selected Chicago’s Paul Konerko as the replacement, not Kevin Youkilis of the Red Sox.

“It’s a hard choice to make. I could have taken him or Youkilis,’’ Girardi said. “Konerko’s hitting slightly higher, has a couple more home runs and couple more RBIs. I went with Konerko. They both deserve to be there; that’s the problem with this.’’

The Yankees manager said his decision had nothing to do with Youkilis being a member of the Red Sox and the rivalry between the teams.

For Konerko, it will be his fourth time in the game. Youkilis has been twice previously.

It was the second Star setback in a week for Youkilis, who on Thursday learned he had lost the on-line Final Vote competition by a close margin to New York’s Nick Swisher.

Youkilis could not be reached for comment after the decision was announced.

Cameron was hit on the forearm in the third inning by Blue Jays starter Brandon Morrow and stayed in the game. “It’s a little sore but I’ll be fine,’’ he said.

Youkilis was hit in the sixth inning, although replays showed he appeared to slip out of the way of the pitch from Shawn Camp before making his way to first base. He was initially called back to the plate before arguing his way on base.

Hall was drilled in the shoulder by a fastball from Jason Frasor in the seventh inning and glared at the pitcher before going to first base. Two umpires quickly got between Hall and Frasor when Hall stopped for a second on the base line.

When Scutaro was hit in the eighth inning by Marc Rzepczynski, he stared into the Toronto dugout and barked out a few choice words.

No Blue Jays were hit.

In the swing
Dustin Pedroia took batting practice before the game, keeping the weight off his broken left foot by kneeling on a stool as he swung at pitches from hitting coach Dave Magadan.

“I just wanted to see some pitches,’’ he said. “I actually felt pretty good.’’

Pedroia’s foot may be broken but his spirit is intact. As manager Terry Francona spoke to reporters in his office before the game, Pedroia walked back and forth in the hallway yelling loudly.

900 no big deal
Francona won his 900th career game Friday night, becoming the ninth active manager to reach that plateau. But he did not revel in the accomplishment or his longevity.

“I’ve always said if I put the players first and the organization first and put yourself behind, things work out,’’ he said. “They have. I’m sitting here managing this team. Things worked out.’’

Francona said he does view himself as a peer of other top managers in the game.

“I got lucky as hell. I know that,’’ Francona said. “I came into a job with a great organization with great players. I caught a break. I know that. You try to take what you’re doing real seriously, but you try not to take yourself too seriously. Sometimes we get a little carried away with ourselves.’’

Beckett set for start
Josh Beckett left the team to fly to Providence and will start for Triple A Pawtucket this afternoon. It will be the first of what the team hopes will be two rehab starts before he joins the rotation. Beckett is clear to throw 80 pitches . . . Rookie left fielder Daniel Nava was 2 for 5 with two doubles and two RBIs. In 23 games, he has 12 extra-base hits and 16 RBIs. Nava has reached safely in 21 of the 23 games he has played since being called up . . . Rookie lefthander Dustin Richardson was called in to face lefthanded hitting Adam Lind of the Blue Jays in the sixth inning and allowed a home run. Lefthanded hitters are 5 of 12 with two home runs against Richardson in the 10 games he has pitched . . . Jonathan Papelbon has pitched once in the last seven games and setup man Daniel Bard once in the last nine games.