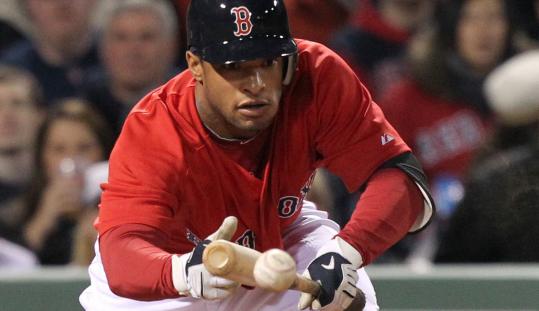 Another injured outfielder, Jeremy Hermida, is taking batting practice and hopes to start a minor league rehabilitation assignment right after the All-Star break.

Mike Cameron, whose playing time has been restricted by a torn muscle in his lower abdomen, has been swinging the bat with more force recently and believes his body is getting strong enough to permit him to play more frequently in the second half of the season.

It may be 10 days before Hermida is ready to rejoin the Sox, and it could take Ellsbury another month given his slow progress to date. But, in time, the Sox will have their Opening Day group of outfielders intact again. The season opened with Cameron in center, Ellsbury in left, J.D. Drew in right, and Hermida off the bench.

Darnell McDonald arrived in April to take Ellsbury’s place on the roster. Daniel Nava was promoted in June when Hermida went on the disabled list. Both have performed admirably, well beyond any reasonable expectations. But that does not guarantee them spots on the roster.

In time, the Sox will have some difficult decisions to make. McDonald, and to a lesser extent Nava, have become part of the fabric of a contending team.

“It’s not something you want to talk about,’’ McDonald said. “But that’s the reality of this game. There are always changes.’’

The Sox are 42-23 in the 65 games McDonald has played since he was promoted from Triple A Pawtucket. McDonald, 31, is hitting .268 with five home runs and 21 RBIs and will probably be in the lineup against Blue Jays lefthander Ricky Romero tonight when the Sox open a three-game series at the Rogers Centre.

On Wednesday, McDonald fouled off five two-strike pitches from Tampa Bay righthander Matt Garza before lining an RBI double to left field in the ninth inning. The Sox lost the game, 6-4, but several teammates came up to McDonald in the clubhouse after the game to acknowledge his effort.

“Garza was throwing 95 and he hung in there,’’ Dustin Pedroia said. “Darnell has been huge for us all season. That was a tremendous at-bat. I don’t know where we would be without him.’’

Manager Terry Francona praised McDonald as well in his postgame comments. This team, he said, has been a fun group to work with. In large part because of the lift provided by McDonald and Nava.

Nava, whose rise from team manager in college to the big leagues is now well known, is hitting .310 with a .380 on-base percentage in 21 games. He has 10 extra-base hits and 14 RBIs.

Francona has used him exclusively in left field.

“I didn’t know when I got here whether it would be for a day, a week, a month, or whatever,’’ Nava said. “I’m literally going day to day. There’s not much point in worrying about it.’’

McDonald is out of minor league options, so if the Sox wanted to send him to Pawtucket he would have to be designated for assignment and pass through waivers for the Sox to retain him.

The Sox were about to designate McDonald May 25 when it appeared Ellsbury was ready to resume playing. But when Ellsbury reported another injury, McDonald retained his spot.

“It’s happened to me before. So much of what happens is a matter of timing,’’ McDonald said. “All I can do is help the team as much as I can. Whatever happens is out of my control.’’

McDonald could well get claimed by another team, given the improvement after a career spent largely in the minor leagues. Nava does have options, so the Sox could send him back to the minors and recall him Sept. 1 when rosters expand.

The other player whose future would be affected by the roster movement is Eric Patterson, who was obtained from Oakland last month. It initially appeared that Patterson would help replace Pedroia at second base. But four of the five games he has started have come in the outfield.

Patterson is 6 of 21 with the Red Sox with a double, a triple, two home runs, and three RBIs. He is less of a baseball vagabond than Nava and McDonald, but was designated for assignment by Oakland before being pursued by the Sox.

Patterson, who is 27, could be the player who sticks around the longest because of his versatility and speed. He can play all three outfield positions along with second base, and for his career has 22 stolen bases in 24 attempts.

Francona has been impressed by how Patterson has looked against righthanded pitchers, as well.

“This was unexpected, but it has been a good fit for me,’’ Patterson said. “It’s fun being part of a team like this.’’

McDonald and Nava feel the same way. For now, they’ll try not to think about what the future holds.

“Just play, that’s all I can do,’’ McDonald said. “If you do well enough, somebody will want you.’’