THIS STORY HAS BEEN FORMATTED FOR EASY PRINTING
Red Sox 9, Orioles 3

Another feather in Lester’s cap 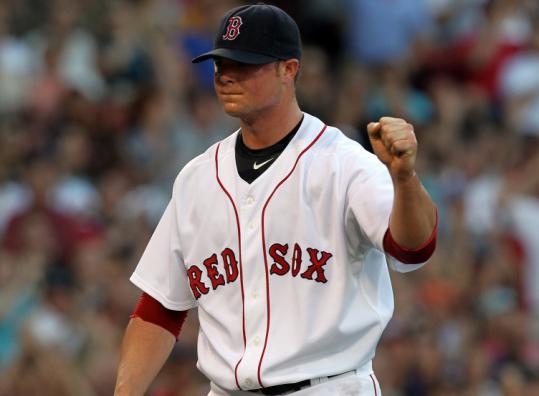 Jon Lester shows his appreciation for a double play that got him out of a bases-loaded bind in the first inning. (Barry Chin/ Globe Staff)
By Peter Abraham Globe Staff / July 4, 2010

There will come a day when the Baltimore Orioles beat Jon Lester. Perhaps if the lefthander follows the career path of Red Sox teammate Tim Wakefield and pitches into his 40s, the Orioles will figure out a way.

For now, it seems impossible. Lester did it to Baltimore again last night, throwing seven dominant innings as the Red Sox cruised to a 9-3 victory before an appreciative crowd of 38,106 at Fenway Park.

It was a typical Lester performance against Baltimore in that he allowed one run and five hits, with one walk and seven strikeouts. He has started 15 times against the Orioles since arriving in the majors in 2006, going 12-0 with a 2.00 earned run average, with the Sox winning 14 times.

Now 10-3 with a 2.76 ERA, Lester is deserving of being named to the All-Star team for the first time and will learn his fate this afternoon.

The usually laconic Lester nearly became animated when he considered the notion of adding an All-Star berth to his many achievements.

Lester’s final start before the break will be Friday in Toronto. That would give him three days off before the July 13 game in Anaheim, Calif.

“If he’s not an All-Star, who is?’’ Red Sox shortstop Marco Scutaro said. “I can’t believe he hasn’t been before. That guy has been one of the best pitchers in the game for a while now.’’

At 49-32, the Sox are a season-high 17 games over .500 and a half-game behind the Yankees in the American League East. The Sox have the second-best record in the game at the season midpoint.

The injury-riddled Sox finished with 14 hits, half of them for extra bases. Kevin Youkilis homered and drove in three runs as the Sox won for the fifth time in six games. J.D. Drew added three hits and two RBIs.

The first inning illustrated why the Orioles are one of the worst teams in baseball and the Red Sox one of the best.

Corey Patterson started with a single, stole second, and went to third on a one-out single by Nick Markakis. Lester then worked carefully to Ty Wigginton, throwing four straight fastballs out of the strike zone.

Wigginton, who has been Baltimore’s most productive hitter this season, was 7 of 16 against Lester in his career and the lefty wasn’t going to give in there.

“I was trying to get him to hit my pitch,’’ Lester said. “I threw a couple that weren’t close. Once I got to 3 and 0, I wasn’t going to give him a cookie. Walk him and go to the next guy, set up a double play.’’

That was the result. Lester’s third pitch to Adam Jones was a two-seam sinking fastball that was obligingly grounded to second base.

Eric Patterson flipped to Scutaro for one out. Scutaro’s throw to first was low and to the right of Youkilis. But the first baseman made a full-body stretch while keeping his foot on the bag.

In the bottom of the inning, Scutaro led off with a single against Jeremy Guthrie (3-10). But when Eric Patterson followed with a bouncer to second base, the Orioles were not quick enough to turn the double play.

That’s when the Red Sox pounced. David Ortiz drew a walk before Youkilis slammed an RBI double to the gap in left. Drew followed with a ground ball into center that scored two runs. The Orioles were slow to react and Drew slid into second base.

With two outs, Daniel Nava pulled a slider to right over the head of Markakis and it rolled to the wall. Drew scored and the Sox had a 4-0 lead.

“We had Lester in the first inning and he got off the hook,’’ said Orioles manager Juan Samuel, who was ejected in the eighth inning. “You have to get those guys when you have the opportunity and we did not do that. The good ones, and he’s one of the good ones, have tendencies to get better as the game progresses.’’

The double play was the first of 10 straight outs by Lester. The Orioles didn’t put another runner on base until Matt Wieters led off the fifth inning with a double. That led to the only run Lester allowed.

Youkilis slammed a two-run homer off one of the billboards above the Monster Seats in the fifth for his 16th home run of the season. Mike Cameron’s RBI double kicked off the Sox’ three-run eighth.

“The way he pitches, I’m confident [it] will take care of things like that,’’ he said.