This couldn’t be better

One of the best, Lincecum, falls 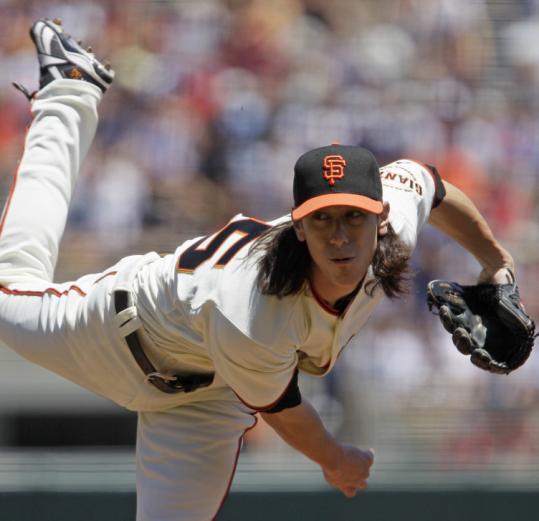 SAN FRANCISCO — When Giants manager Bruce Bochy sent up a pinch hitter for starting pitcher Tim Lincecum in the fourth inning yesterday, the first reaction was to wonder whether the righthander had an injury.

But Lincecum was fine physically. Only his earned run average was damaged.

For the second time in five days, the Red Sox beat up on one of the best pitchers in the National League, as they scored four runs on five hits and three walks against Lincecum en route to a 5-1 victory at AT&T Park.

On Wednesday they drove Rockies ace Ubaldo Jimenez of the out of the game in the sixth inning after he allowed six runs on 10 hits.

Interleague play is over and NL pitchers must be relieved. The Sox went 13-5, hit .292, and averaged just over six runs a game. Their victims included Jimenez, Lincecum, Roy Halladay of the Phillies, and Dan Haren of the Diamondbacks.

Most times, that sounds like a Cy Young Award ballot.

“I hope that it means that we have a good lineup,’’ Sox manager Terry Francona said. “Sometimes you catch a guy not on their best day, either. But you still have to take advantage of it.’’

That seemed to be the case yesterday as Lincecum threw only 44 of his 79 pitches for strikes. After retiring the first two batters, eight of the next 14 Sox hitters reached base.

It started in the first inning when David Ortiz launched a 3-and-2 changeup into the calm waters of McCovey Cove on the other side of the right-field wall.

It was the first ball to take a dip this season, the 72d in 11 seasons.

“Good pitchers, they’re not going to make that many mistakes. So whenever you get one, you have to can’t miss it,’’ Ortiz said.

Ortiz, normally a designated hitter, had only one at-bat the previous two days. Francona worked him into the lineup at first base yesterday by moving Kevin Youkilis to third.

That towering home run, Ortiz’s 275th as a member of the Red Sox, was the result. Ortiz had been tied with Manny Ramirez for fifth place in team history.

“It felt good,’’ Ortiz said. “I wasn’t feeling the way I like to feel. This interleague thing, I haven’t played in the past few days and you have to go out there and face one of the best pitchers in the game. It’s not the way you want to go out there. You know what I’m saying? You’ve just got to do what you have to do and do your best.’’

The second inning started with Lincecum walking Victor Martinez on five pitches. One out later, Bill Hall followed with a double down the left-field line. The Giants elected to walk Darnell McDonald to get to Sox pitcher Jon Lester.

Lester, who played some outfield and first base in high school, worked the count to 3 and 1 and hammered a fastball deep to the gap in right field. Nate Schierholtz tracked it down but Lester had a sacrifice fly and the first RBI of his career.

“I didn’t have an approach, I was just trying to put the ball in play,’’ Lester said. “I was just happy to hit the ball.’’

The next batter, Marco Scutaro, swing at the first pitch and drove in Hall with a single to center.

“In the second inning, I kind of lost my stuff,’’ Lincecum said. “I felt like a robot working out there. Things weren’t moving smoothly.’’

The Sox added another run in the third inning as Youkilis singled before J.D. Drew walked. Hall, starting in place of the injured Dustin Pedroia at second base, cracked a single to left field.

“We’ve been doing that all year long,’’ Hall said. “This team makes a pitcher work.’’

Lincecum had won his three previous starts, allowing four earned runs over 22 innings and striking out 24. The outing matched the shortest of his career.

The Red Sox would like to believe they had plenty to do with that.