But catcher may not have to go on the DL 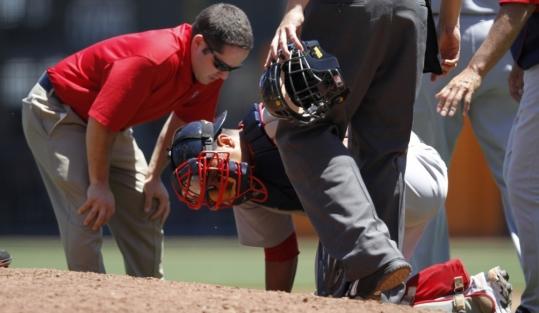 Victor Martinez is checked after he was injured by a foul tip in the second inning. After still another foul tip, the verdict came in: a broken left thumb. (Kevin Bartram/Reuters)
By Amalie Benjamin Globe Staff / June 28, 2010

SAN FRANCISCO — Victor Martinez hopped around and was clearly hurting, with Pablo Sandoval having just fouled a ball off his already iffy left foot. The catcher went down, with manager Terry Francona and trainer Mike Reinold coming out to check on him, but remained in the game until the fifth inning.

So, after that display of pain, it was surprising to hear after the game that the body part that was injured was Martinez’s left thumb. He had an X-ray, which revealed a fracture of the distal phalanx, at the top of the digit. Martinez took two foul tips off the thumb, one off the bat of Sandoval, the ball bending his glove back before hitting his tender toe. The second tip came during an Andres Torres at-bat in the third.

Martinez came back out to warm up Jon Lester before the fifth, and when Francona saw him struggling, Martinez was removed and replaced by Jason Varitek.

“The first one hit my finger, and then it hit my toe at the same time,’’ Martinez said. “It was sore. Both were sore, but the second one, I had another foul tip off my thumb again. By the time I got back to the dugout, it swelled and swelled and I couldn’t put my hand in the glove. It was really painful.’’

Martinez will be reexamined today after the Sox return to Boston.

Even if Martinez remains on the active roster, the Sox may need another catcher. That presents a problem, as minor league catchers Mark Wagner and Dusty Brown are already injured.

“I don’t think I have to be on the disabled list,’’ said Martinez, who has never had an injury to his fingers or thumb. “Obviously it’s pain, but we’ll see how I feel tomorrow. It’s a good thing that we have an offday tomorrow.’’

It was unclear whether the injury would hamper him more batting or behind the plate.

“There’s a lot of catchers, they have thumb guards,’’ Francona said. “[Bullpen coach Gary Tuck] was coming out with, I think, two or three contraptions. He was saying after the game that that’s what bothering him now is the swelling. Thinks if he can get the swelling out of there, he was kind of optimistic.’’

Buchholz is better
After coming out of Saturday’s game because of an injury that was originally termed a hyperextended left knee but appears to be more of a lower hamstring issue, Clay Buchholz was better yesterday. He is likely to be reexamined in Boston, but it appears to be a best-case scenario.

With the Sox having two days off this week, they don’t need to make an immediate decision on Buchholz. They have the flexibility to skip his turn in the rotation or give each of their starters extra rest.

“He’s a little bit black and blue in his knee, which means there’s a little bit of bleeding,’’ Francona said. “Saying that, he feels pretty good. Pretty good range of motion. We have multiple offdays coming up. At least it gives him an opportunity — we can wait. We’ve already talked to [Tim Wakefield] about possibly what the week looks like.’’

Buchholz injured himself running to second base after recording his first major league hit, a single. And his manager was giving him a bit of grief yesterday.

No plan for Pedroia
The Sox still don’t have a timetable for Dustin Pedroia, who broke his left foot Friday night when he fouled a ball off his instep. They are likely to know more after he’s examined today.

“If there’s parameters, he’s going to be quick,’’ Francona said. “He’s going to be on the good end. As long as he’s not weight-bearing, there’s not much he can do.’’

Contrary to what Pedroia said earlier, Francona said that because the fracture is non-displaced, it’s unlikely he would need a pin inserted in the foot to promote healing.

Pedroia appeared exhausted in the clubhouse yesterday, after feeling too much pain to sleep much. He said doctors told him the pain would continue that way for the next week.

“I don’t know what the cameras showed, but he was down there [in the dugout] a half-hour before the game,’’ Francona said. “I know I say it, but we’re so lucky to have him. We’re even lucky to have him hurt. That’s the way he is. It’s just unbelievable. Sometimes you get lucky as an organization, and we did.’’

Not lacking offense
More than a few people were confused as to why John Lackey grabbed a bat in the fifth inning of Saturday’s game, hitting for reliever Ramon Ramirez. Why wouldn’t Francona send Ramirez up to bat for himself? “Because Lackey’s a good hitter,’’ Francona said. “Ramon stinks.’’ It was an interesting decision, after the Sox already had one starting pitcher injured running the bases. “The situation we’re in, we were trying to kind of conserve, so if we got to later in the game we could have a legitimate bench. Lackey’s a pretty good hitter. He was going to take a strike. And I said, when you hit it, just use some judgment and he did a really good job.’’ . . . Though Mike Cameron had said on Saturday that he expected to play yesterday, he was out of the lineup, with Darnell McDonald playing center field. Cameron made an outstanding catch and hit a home run Saturday, but told Francona yesterday morning that he was sore. “I think it’s going to be more on how he feels,’’ Francona said of when Cameron will play. “He’s swinging the bat, which is good. I don’t know if he could swing the bat if he was hurting a lot.’’ . . . Jacoby Ellsbury will remain in Arizona for the time being, as he is still not ready for baseball activities. He is likely to return to Boston before the Sox head out on their next road trip July 5 . . . The Sox plan to give Jed Lowrie, who is still working his way back from mononucleosis, another week before beginning a rehab stint with the Lowell Spinners.