Timing key when GMs are up 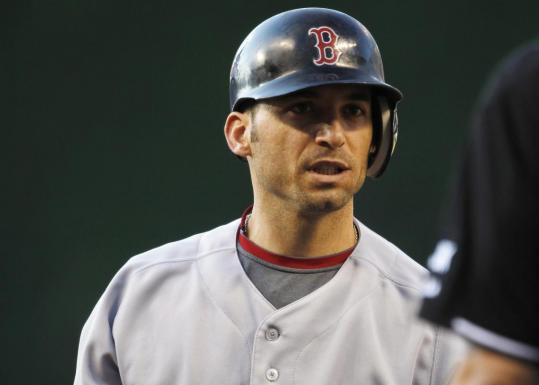 Marco Scutaro has a question for plate ump Ron Kulpa after striking out swinging in the first. (David Zalubowski/Associated Press)
By Nick Cafardo Globe Staff / June 24, 2010

DENVER — One of the toughest things for a baseball general manager is timing.

That seems to be where Theo Epstein is right now with the Red Sox.

When Kevin Youkilis, David Ortiz, and Adrian Beltre are healthy and performing well, there’s no need for Mike Lowell.

But when one of them is injured or not performing well, there assuredly is a need for Lowell.

Let’s move on to the outfield situation.

Allard Baird’s finds — Darnell McDonald and Daniel Nava — deserve a big “bravo!’’ for a job well done. They have helped keep the Sox afloat over the past three months.

But with Jeremy Hermida coming off injured ribs, Jacoby Ellsbury perilously close to going into a third month of rehab for his rib injury, and Mike Cameron looking as if he’s going to struggle with his abdominal injury the rest of the season, you wonder whether the time is now to find an outfielder who can stabilize the unit.

Assistant general manager Ben Cherington said on Jim Bowden’s Sirius radio show that a lefthanded-hitting outfielder is one of the needs the Sox may delve into at some point. There aren’t many available, though. One is Kansas City’s David DeJesus, who would seem to be the best fit for Boston. DeJesus is currently playing center field because the injury-prone Rick Ankiel is out again.

While DeJesus is more of a corner outfielder, he can certainly play center on instincts alone. He doesn’t make a ton of money ($4.7 million, with a $6 million option for next season) and is having a very good season, hitting .321 with 8 homers.

DeJesus was drafted in Kansas City when Baird was there, so there’s a connection. Baird recently recommended that the Sox sign Ryan Shealy, a big first baseman who never quite made it in Kansas City, and he has started strongly for Pawtucket. He’s another big body to add to the first base mix and would make the trading or release of Lowell easier to swallow.

Tuesday night’s 2-1 loss to the Rockies must have brought Lowell’s frustration to an all-time high. He hadn’t had a plate appearance in nine games, then was asked to step up in the ninth, two outs, runner at first, last chance for the Sox to tie the game. Lowell hit the ball pretty well into the shortstop hole, but Clint Barmes made a terrific stop, got up, and was still able to throw Lowell out at first.

The classy third baseman seemed to be as down on himself as he was the situation, referring to himself as slow.

You hate to see the 2007 World Series MVP go through this. It stands to reason that a team in need of a corner infielder could utilize Lowell, if not on a full-time basis then more than the Sox have been able to use him. Complicating matters for Lowell is that Edwin Encarnacion is also out there looking for work after the Blue Jays designated him for assignment.

The Twins look to be a team that could use a third baseman. They have had to do a patchwork job at the position with Nick Punto (30 starts), Brendan Harris (21), Danny Valencia (13), and cameo appearances by Michael Cuddyer, Luke Hughes, Matt Tolbert, and Alexi Casilla.

The Twins could also stand to add a veteran righthanded bat to their lineup, but they are very careful as to whom they let into their sanctum and sometimes would rather piece things together than commit to one person.

The Rangers also keep showing interest, and with reason. Lowell could back up Michael Young and Justin Smoak at the corners and add a righthanded bat to the mix.

League sources indicate that the price tag for DeJesus has been quite high, with the Royals feeling he is their major chip and they need to get a quality prospect or two in return. Their organizational people love Boston prospect Jose Iglesias, but the slick-fielding shortstop would appear to be an untouchable. The Cubs have been shopping Kosuke Fukodome all around baseball. Fukodome, 33, is hitting .281 and is a decent right fielder. He hasn’t fulfilled expectations, but he hasn’t been a bust by any means. But he makes $13 million this year and $13.5 million next season.

There are journeyman types like Gabe Gross, hitting .274 in Oakland but with no power; Scott Podsednik, having a good year in Kansas City; Ryan Sweeney in Oakland; Juan Pierre in Chicago; and David Murphy in Texas. Pittsburgh’s Garrett Jones likely would require too much in return.

Teams are beginning to heat up their pro scouting, and it won’t be long before trade talks get into a more serious stage. The Sox have to look ahead. But when they do, they can’t be sure of what Ellsbury and Cameron are going to be able to give them. Nor can they assume that their “finds’’ — McDonald and Nava — will continue to hit.

The other need, as defined by Cherington, is a defensive backup shortstop. Bill Hall has been a nice utility man, but shortstop is a big position.

Adam Everett, released by the Tigers, is the ultimate glove man and could be had. Rhode Island’s John McDonald in Toronto would be superb. This type of move would require that Lowell be moved and that a tough decision be made with someone like McDonald, whom the Sox were going to designate for assignment until Ellsbury went on the DL for a second time.

The third need is bullpen help. The Sox have gone through a few bodies in the back end. While they say they like Scott Atchison, they keep looking, maybe for another lefty. Baltimore’s Will Ohman comes to mind, but these guys are tough to find.

The Sox will need all of these spots filled. But when? For what price? It’s the toughest time of the year for a GM. You want to improve and at the same time not upset the apple cart if you’re doing well.